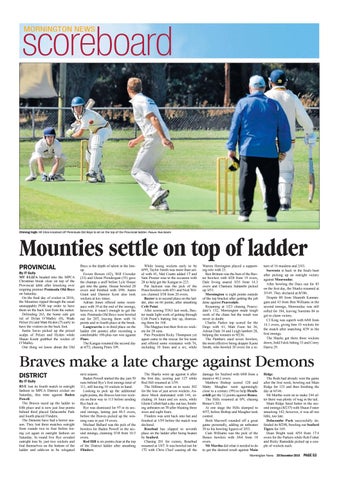 Mounties settle on top of ladder PROVINCIAL By IT Gully MT ELIZA headed into the MPCA Christmas break clear on top of the Provincial table after knocking over reigning premier Peninsula Old Boys on Saturday. On the final day of cricket in 2016, the Mounties ripped through the usual unstoppable POB top order to have them on the back foot from the outset. Defending 263, the home side got rid of Dylan O’Malley (0), Wade Pelzer (6) and Matt Hyden (7) early to have the visitors on the back foot. Justin Savio picked up the prized scalps of Pelzer and Hyden while Shaun Knott grabbed the wicket of O’Malley. One thing we know about the Old

Boys is the depth of talent in the lineup. Eivion Bowen (42), Will Crowder (33) and Glenn Prendergast (55) gave the champs a sniff before Lyle House got into the game. House bowled 28 overs and finished with 3/90. Justin Grant and Damien Kent also took wickets at key times. Adrian Jones offered some resistance with 39 at the end of the innings, however, it wasn’t enough to get the win. Peninsula Old Boys were bowled out for 207, leaving them with 54 points and in fourth place at the break. Langwarrin is in third place on the ladder (66 points) after recording a comfortable 100-plus run win against Pines. The Kangas resumed the second day at 4/73, chasing Pines 109.

While losing wickets early to be 6/99, Taylor Smith was more than solid with 45, Mal Coutts added 17 and Sam Prosser rose to the occasion with 28 to help get the Kangas to 223. Pat Jackson was the pick of the Pines bowlers with 4/51 and Nick Wilcox claimed 3/38 from 20 overs. Baxter is in second place on the ladder, also on 66 points, after smashing Crib Point. After scoring 7/363 last week, Baxter made light work of getting through Crib Point’s batting line up, dismissing them for 168. The Magpies lost their first six wickets for 28 runs. Pies President Ricky Thompson yet again came to the rescue for his team and offered some resistance with 74, including 10 fours and a six, while

Warren Herrington played a supporting role with 25. Ben Brittain was the best of the Baxter bowlers with 4/28 from 19 overs, Dale Irving snared 3/35 from 14.3 overs and Chamara Sattambi picked up 3/51. Mornington is eight points outside of the top bracket after getting the job done against Pearcedale. Resuming at 1/23 chasing Pearcedale’s 132, Mornington made tough work of the chase but the result was never in doubt. Charlie Parker top scored for the Dogs with 41, Matt Foon hit 36, Adrian Dale 34 and Leigh lambert 28, helping the winners to 9/236. The Panthers used seven bowlers, the most effective being skipper Kaine Smith, who bowled 30 overs for a re-

turn of 16 maidens and 2/43. Sorrento is back in the finals hunt after picking up an outright victory against Moorooduc. After bowling the Ducs out for 85 on the first day, the Sharks resumed at 3/149. They declared at 8/186. Despite 80 from Shamith Kannangara and 43 from Ben Williams in the second innings, Moorooduc was still rolled for 184, leaving Sorrento 84 to get to claim victory. CJ King was superb with 6/68 from 14.1 overs, giving him 10 wickets for the match after snatching 4/39 in the first innings. The Sharks got there three wickets down, Jedd Falck hitting 33 and Corey Harris 29.

Braves make a late charge against Demons DISTRICT By IT Gully RYE lost its fourth match in outright fashion in MPCA District cricket on Saturday, this time against Baden Powell. The Braves raced up the ladder to fifth place and is now just four points behind third placed Delacombe Park and fourth placed Flinders. The Demons have had a horror season. They lost three matches outright from rounds two to four before losing yet again in outright fashion on Saturday. In round five Rye avoided outright loss by just two wickets and find themselves on the bottom of the ladder and odds-on to be relegated

next season. Baden Powell started the day just 50 runs behind Rye’s first innings total of 111, still having 10 wickets in hand. Looking to pick up the additional eight points, the Braves lost two wickets on their way to 113 before sending Rye back in. Rye was dismissed for 97 in its second innings, lasting just 40.5 overs, before the Braves picked up the winning runs in just 19 overs. Michael Ballard was the pick of the bowlers for Baden Powell in the second innings, claiming 5/18 from 10.5 overs. Red Hill is six points clear at the top of the District ladder after smashing Flinders.

The Sharks were up against it after the first day, scoring just 127 while Red Hill resumed at 1/59. The Hillmen went on to score 302 for the loss of just seven wickets. Andrew Mock dominated with 144, including 16 fours and six sixes, while Glenn Collett had a day out too, finishing unbeaten on 70 after blasting three sixes and eight fours. Flinders was sent back into bat and finished at 1/59 before the match was declared. Rosebud has slipped to seventh place on the ladder after being beaten by Seaford. Chasing 201 for victory, Rosebud resumed at 1/47. It was bowled out for 172 with Chris Cleef causing all the

damage for Seaford with 6/68 from a massive 40.2 overs. Matthew Bishop scored 128 and Matty Meagher went agonisingly close to a century (99) to help Heatherhill get the 12 points against Boneo. The Hills resumed at 0/9, chasing Boneo’s 203. At one stage the Hills slumped to 4/57, before Bishop and Meagher took control. Brett Maxwell rounded off a great game personally, adding an unbeaten 50 to his bowling figures of 3/55. Cam Williams was the pick of the Boneo bowlers with 3/64 from 18 overs. Mt Martha did what it needed to do to get the desired result against Main

Ridge. The Reds had already won the game after the first week, bowling out Main Ridge for 125 and then finishing the day at 6/146. Mt Martha went on to make 244 after there was plenty of wag in the tail. Main Ridge fared better in the second innings (8/237) with Shaun Foster smacking 142, however, it was all too little, too late. Delacombe Park successfully defended its 8/298, bowling out Seaford Tigers for 169. Dean Bright took 4/54 from 17.4 overs for the Parkers while Rob Fisher and Ricky Ramsdale picked up a couple of wickets each.