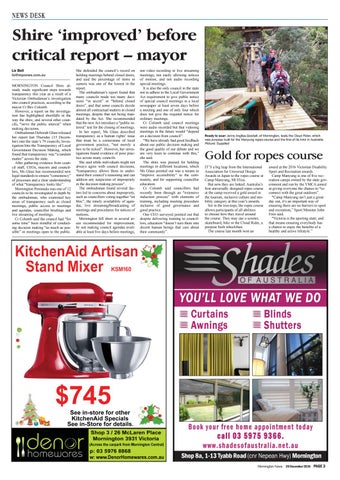 Shire ‘improved’ before critical report – mayor Liz Bell liz@mpnews.com.au MORNINGTON Council Shire already made significant steps towards transparency this year as a result of a Victorian Ombudsman’s investigation into council practices, according to the mayor Cr Bev Colomb. However, a report on the investigation has highlighted shortfalls in the way the shire, and several other councils, “serve the public interest” when making decisions. Ombudsman Deborah Glass released her report last Thursday (15 December) into the state’s 79 councils, Investigation Into the Transparency of Local Government Decision Making, which found that transparency was “a random matter” across the state. After gathering evidence from council staff, CEOs, mayors and councillors, Ms Glass has recommended new legal standards to ensure “consistency” of processes and a clear understanding of what “transparency looks like”. Mornington Peninsula was one of 12 councils to be investigated in depth by the ombudsman, who examined key areas of transparency such as closed meetings, public access to meetings and agendas, councillor briefings and live streaming of meetings. Cr Colomb said the council had “for some time” been mindful of conducting decision making “as much as possible” in meetings open to the public.

She defended the council’s record on holding meetings behind closed doors, and said the percentage of items in camera was one of the lowest in the report. The ombudsman’s report found that many councils made too many decisions “in secret” or “behind closed doors”, and that some councils decide almost all contractual matters in closed meetings, despite that not being mandated by the Act. She recommended that the new Act introduce a “public interest” test for the closing of meetings. In her report, Ms Glass described transparency as a human rights’ issue that must be a cornerstone of local government practice, “not merely a box to be ticked”. However, her investigations found evidence of poor practice across many councils. She said while individuals might not always agree with council decisions, “transparency allows them to understand their council’s reasoning and can address any suspicions of impropriety in the decision making process”. The ombudsman found several factors led to concerns about impropriety, such as councillors voting together “en bloc”, the timely availability of agendas, live streaming/broadcasting of meetings and procedures for notices of motions. Mornington fell short in several areas recommended for improvement, by not making council agendas available at least five days before meetings;

not video recording or live streaming meetings; not easily allowing notices of motion; and not audio recording special meetings. It is also the only council in the state not to adhere to the Local Government Act requirement to give public notice of special council meetings in a local newspaper at least seven days before a meeting and one of only four which does not give the requited notice for ordinary meetings. Cr Colomb said council meetings were audio recorded but that videoing meetings in the future would “depend on a decision from council”. “We have already had good feedback about our public decision making and the good quality of our debate and we are very keen to continue with this,” she said. The shire was praised for holding meetings in different locations, which Ms Glass pointed out was a means to “improve accessibility” to the community, and for supporting councillor education. Cr Colomb said councillors had recently been through an “extensive induction process” with elements of training, including meeting procedure inclusive of good governance and good practice. One CEO surveyed pointed out that despite delivering training to councillors, education “doesn’t turn them into decent human beings that care about their community”.

Ready to soar: Jenny Angliss-Goodall, of Mornington, tests the Cloud Rider, which was purpose built for the Manyung ropes course and the first of its kind in Australia. Picture: Supplied

Gold for ropes course IT’S a big leap from the International Association for Universal Design Awards in Japan to the ropes course at Camp Manyung, Mt Eliza. But now they are linked: Australia’s first universally designed ropes course at the camp received a gold award in the tourism, inclusive culture and mobility category at this year’s awards. Set in the tree-tops, the ropes course allows participants of all abilities to choose how they travel around the course. They may use a scooter, skateboard, bike or the Cloud Rider, a purpose built wheelchair. The course last month won an

award at the 2016 Victorian Disability Sport and Recreation awards. Camp Manyung is one of five recreation camps owned by the state government and run by the YMCA aimed at giving everyone the chance to “reconnect with the great outdoors”. “Camp Manyung isn’t just a great day out, it’s an important way of ensuring there are no barriers to sport and recreation,” Sport Minister John Eren said. “Victoria is the sporting state, and that means ensuring everybody has a chance to enjoy the benefits of a healthy and active lifestyle.”