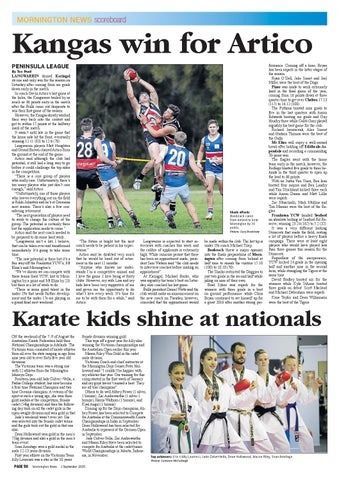 By Toe Punt LANGWARRIN denied Karingal its one and only win for the season on Saturday after coming from six goals down early in the match. In coach Gavin Artico’s last game at the helm, the Kangaroos trailed by as much as 36 points early in the match after the Bulls came out desperate to win their first game of the season. However, the Kangas slowly worked their way back into the contest and got to within 15 points at the halfway mark of the match. It wasn’t until late in the game that the home side hit the front, eventually winning 12.11 (83) to 12.6 (78). Langwarrin players Matt Naughton and Gerard Brown chaired Artico from the ground at the end of the game. Artico said although the club had potential, it still had a long way to go before it could challenge the top sides in the competition. “There is a core group of players who really care. Unfortunately, there’s too many players who just don’t care enough,” said Artico. “Unfortunately, one of those players who leaves everything out on the field is Rikki Johnston and he’s at Dromana next season. There’s also a few considering retirement. “The next generation of players need to work to change the culture of the group. The potential is certainly there but the application needs to come.” Artico said the next coach needed to be prepared to do some hard work. “Langwarrin isn’t a list, I believe, that can be taken over and transformed immediately. It’s going to take some time. “The raw potential is there but it’s a fair way off the Frankston YCW’s, Mt Eliza’s and Mornington’s. “We’ve shown we can compete with these teams (beat YCW, lost to Mornington by a point and Mt Eliza by 23) but there is a lot of work to do. “There is some good talent in the under 19s that needs further development and the under 17s are playing in a grand final next weekend.

“The future is bright but the next coach needs to be patient in his expectations.” Artico said he doubted very much that he would be lured out of retirement in the next 12 months. “Anyone who knows me understands I’m a competitive animal and I love the game. I love being at footy clubs. However, my wife Lisa and my kids have been very supportive of me and given me the opportunity to do what I love every week. It’s time for me to be with them for a while,” said Artico.

Langwarrin is expected to start interviews with coaches this week and the calibre of applicants is extremely high. While rumours persist that there has been an appointment made, president Sam Watson said “the club needs to interview coaches before making an appointment”. At Karingal, Michael Burke, who was arguably his team’s best on Saturday, also coached his last game. Bulls president Daniel Watts said the club would make an announcement on the new coach on Tuesday, however, conceded that the appointment would

be made within the club. The hot tip is under 19s coach Michael Triep. Bonbeach threw a major spanner into the finals preparations of Mornington after coming from behind at half time to smash the visitors 15.10 (100) to 10.10 (70). The Sharks restricted the Doggies to just two goals in the second half while piling on nine of their own. Brad Sykes was superb for the winners with three goals in a best on ground performance while Chris Bryan continued to set himself up for a great 2016 after another strong per-

formance. Coming off a knee, Bryan has been superb in the latter stages of the season. Ryan O’Dell, Jake Smart and Joel Miller were the best of the Dogs. Pines was made to work extremely hard in the final game of the year, coming from 16 points down at three quarter time to get over Chelsea 17.13 (115) to 16.12 (108). The Pythons booted nine goals to five in the last quarters with Aaron Edwards booting six goals and Guy Hendry three while Caleb Gray played arguably his best game for the club. Richard Jaroszczuk, Alex Smout and Hudson Thomas were the best of the Gulls. Mt Eliza will enjoy a well-earned break after holding off Edithvale-Aspendale and recording a commanding 50-point win. The Eagles went with the home team early in the match, however, the Redlegs blasted five goals to three behinds in the third quarter to open up the lead to 46 points. With no Justin Van Unen, Ben lean booted four majors and Ben Landry and Tim Strickland kicked three each while Aaron Dunne and Matt Lillie were superb. Zac Muschialli, Mark Mullins and Tim Mannix were the best of the Eagles. Frankston YCW handed Seaford an absolute belting at Seaford Rd Reserve, winning 23.24 (162) to 5.2 (32). It was a very different looking Stonecats that made the field, resting a lot of players before a heavy finals campaign. There were at least eight players who would have played less than three games this season for the Stonecats. Regardless of the inexperience, YCW kicked 14 goals in the opening half and another nine in the second hour, while strangling the Tigers at the same time. David Bodley booted six for the winners while Kyle StAnne booted three goals on debut. Scott Macleod and Michael Debenham were superb. Kane Taylor and Dean Williamson were the best of the Tigers.

Karate kids shine at nationals ON the weekend of the 7 -9 of August the Australian Karate Federation held their National Championships in Adelaide. The Victorian team consisted of karate athletes from all over the state ranging in age from nine year old to over forty-five year old divisions. The Victorian team was a strong one with 12 athletes from the Mornington Ishinryu Dojo. Fourteen-year-old Jade Colver –Vella, a Padua College student, has now become a four time National Champion and two time Oceania champion. A veteran of the sport at such a young age, she won three gold medals at the competition; female cadet (54kg division) and then the following day took on all the cadet girls in the open-weight division and won gold in that. Jade’s weekend wasn’t over yet. She was selected into the female cadet teams and the girls took out the gold in that one also. Dean Hollowood won gold in the men’s 75kg division and also a gold in the men’s team event. Sean Armitage won a gold medal in the male 12-13 years division. First year athlete on the Victorian Team Ally Lourensz was a star in the 10 years

female division winning gold. This tops off a great year for Ally also winning the Victorian championships and the Australian Open earlier this year. Mason Riley Won Gold in the cadet male division. Victorian Coach and chief instructor at the Mornington Dojo Sensei Peter Hollowood said “I couldn’t be happier with my athletes this year. Our training for this comp started in the first week of January and my guys haven’t missed a beat. They are all true champions”. Others to do well Abbey Power (1 silver, 1 bronze), Zac Andrewartha (1 silver 1 bronze), Harris Walburn (1 bronze), and Kyal Angel (1 bronze). Coming up for the Dojo champions, Abbey Power has been selected to Compete for Australia at the Commonwealth Karate Championships in India in September. Dean Hollowood has been selected for Australia to represent at the German Open in September. Jade Colver-Vella, Zac Andrewartha and Mason Riley Have been selected to compete for Australia at the cadet/junior World Championships in Jakarta, Indonesia, in November.