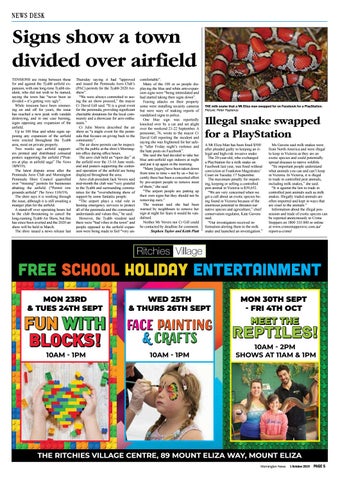 Signs show a town divided over airfield TENSIONS are rising between those for and against the Tyabb airfield expansion, with one long-time Tyabb resident, who did not wish to be named, saying the town has “never been so divided – it’s getting very ugly”. While tensions have been simmering on and off for years, the issue has reached a new peak with vandals destroying, and in one case burning, signs opposing any expansion of the airfield. Up to 100 blue and white signs opposing any expansion of the airfield were erected throughout the Tyabb area, most on private property. Two weeks ago airfield supporters printed and distributed coloured posters supporting the airfield (“Posters at play in airfield saga” The News 18/9/19). The latest dispute arose after the Peninsula Aero Club and Mornington Peninsula Shire Council quarrelled over “missing” permits for businesses abutting the airfield. (“Permit row grounds airfield” The News 11/6/19). The shire says it is working through the issue, although it is still awaiting a mastger plan for the airfield. A stand-off over operating hours led to the club threatening to cancel the long-running Tyabb Air Show, but this has since been averted and the 2020 air show will be held in March. The shire issued a news release last

Thursday saying it had “approved and issued the Peninsula Aero Club’s (PAC) permits for the Tyabb 2020 Airshow”. “We were always committed to seeing the air show proceed,” the mayor Cr David Gill said. “It is a great event for the peninsula, providing significant charitable donations for the local community and a showcase for aero enthusiasts.” Cr Julie Morris described the air show as “a staple event for the peninsula that focuses on giving back to the community”. The air show permits can be inspected by the public at the shire’s Mornington office during office hours. The aero club held an “open day” at the airfield over the 15-16 June weekend and posters supporting the continued operation of the airfield are being displayed throughout the area. Aero club president Jack Vevers said mid-month the club was “very grateful to the Tyabb and surrounding communities for the “overwhelming show of support by some fantastic people. “The airport plays a vital role in hosting emergency services to protect all of the peninsula and the community understands and values this,” he said. However, the Tyabb resident said there were “bad vibes in the town” and people opposed to the airfield expansion were being made to feel “very un-

comfortable”. Many of the 100 or so people displaying the blue and white anti-expansion signs were “being intimidated and had started taking their signs down”. Fearing attacks on their property some were installing security cameras but were wary of making reports of vandalised signs to police. One blue sign was reportedly knocked over by a car and set alight over the weekend 21-22 September. A pensioner, 76, wrote to the mayor Cr David Gill reporting the incident and saying she was frightened for her safety “after Friday night’s violence and the hate posts on Facebook”. She said she had decided to take her blue anti-airfield sign indoors at night and put it up again in the morning. “Many [signs] have been taken down from time to time – not by us – but recently there has been a concerted effort by pro-airport people to remove most of them,” she said. “The airport people are putting up their own signs but they should not be removing ours.” The woman said she had been warned by neighbours to remove her sign at night for fears it would be vandalised. Neither Mr Vevers nor Cr Gill could be contacted by deadline for comment. Stephen Taylor and Keith Platt

THE milk snake that a Mt Eliza man swapped for on Facebook for a PlayStation. Picture: Peter Paplanus

Illegal snake swapped for a PlayStation A Mt Eliza Man has been fined $500 after pleaded guilty to keeping an illegal and high-risk invasive snake. The 20-year-old, who exchanged a PlayStation for a milk snake on Facebook last year, was fined without conviction at Frankston Magistrates’ Court on Tuesday 17 September. The maximum penalty for importing, keeping or selling a controlled pest animal in Victoria is $39,652. “We are very concerned when we get a call about an exotic species being found in Victoria because of the enormous potential to threaten our native species and agriculture,” chief conservation regulator, Kate Gavens said. “Our investigators received information alerting them to the milk snake and launched an investigation.”

Ms Gavens said milk snakes were from North America and were illegal to keep in Victoria as they are an exotic species and could potentially spread diseases to native wildlife. “Its important people understand what animals you can and can’t keep in Victoria. In Victoria, it is illegal to trade in controlled pest animals, including milk snakes,” she said. “It is against the law to trade in controlled pest animals such as milk snakes. Illegally traded animals are often imported and kept in ways that are cruel to the animals.” Information about the illegal possession and trade of exotic species can be reported anonymously to Crime Stoppers on 1800 333 000 or online at www.crimestoppersvic.com.au/ report-a-crime/