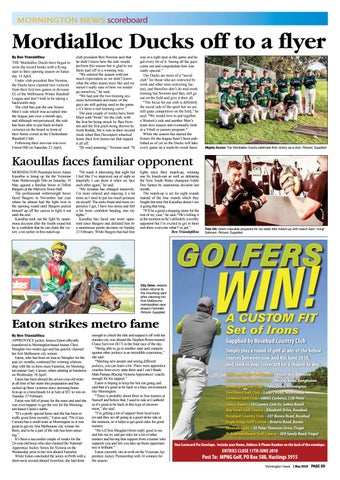 Mordialloc Ducks off to a flyer By Ben Triandafillou THE Mordialloc Ducks have begun to write the record books with a flying start to their opening season on Saturday 14 April. Under club president Ben Newton, the Ducks have claimed two victories from their first two games in division EL of the Melbourne Winter Baseball League and don’t look to be taking a backwards step. The club has just the one Senior Men’s side which was accepted into the league just over a month ago, and although inexperienced, the side has been able to put back-to-back victories on the board in front of their home crowd at the Cheltenham Baseball Club. Following their two-run win over Forest Hill on Saturday 21 April,

club president Ben Newton said that he didn’t know how the side would perform this season but is glad to see them start off in a winning way. “We entered the season with not much expectation as we didn’t know what the other teams were like and we weren’t really sure of how we would go ourselves,” he said. “We had just the two training sessions beforehand and many of the guys are still getting used to the game – it’s been a real learning curve.” The past couple of weeks have been filled with “firsts” for the club, with the first hit being struck by Ben Newton and the first pitch being thrown by Scott Rodda, but it was in their second week when Ben Davenport whacked home their first home-run that topped it all off. “[It was] amazing,” Newton said. “It

was in a tight spot in the game and he got every bit of it. Seeing all the guys come out and congratulate him was really special.” The Ducks are more of a “social club” for those who are restricted by work and other time restricting factors, and therefore don’t do mid-week training but Newton said they still go out on the field and give it their all. “The focus for our club is definitely the social side of the sport but we are still quite competitive on the field,” he said. “We would love to put together a Women’s side and another Men’s team next season and eventually look at a T-ball or juniors program.” While the season has started the fixture for the league hasn’t been published as of yet so the Ducks will take every game on a week-by-week basis.

Kaoullas faces familiar opponent MORNINGTON Peninsula boxer Adam Kaoullas is lining up for the Victorian State Welterweight Title on Saturday 19 May against a familiar boxer in Dillon Bargero at the Malvern Town Hall. The professional welterweight boxer faced Bargero in November last year where he almost had the fight won in the opening round until Bargero picked himself up off the canvas to fight it out until the end. Kaoullas took out the fight by unanimous decision after the fourth round but he is confident that he can claim the victory a lot earlier in this match-up.

“He made it interesting that night but I feel like I’ve improved out of sight so hopefully I can show it when we face each other again,” he said. “My mindset has changed massively. I’m more relaxed and enjoying it a lot more as I used to put too much pressure on myself. The more bouts and more experience I get, I have less stress and feel a lot more confident heading into my fights.” Kaoullas has faced one more opponent since Bargero and defeated him by a unanimous points decision on Sunday 25 February. While Bargero has had four

fights since their match-up, winning one by knock-out as well as defeating the New South Wales champion Eddie Dos Santos by unanimous decision last month. The match-up is set for eight rounds instead of the four rounds which they fought last time but Kaoullas doesn’t see it going that long. “It’ll be a good a stepping stone for the rest of my year,” he said. “He’s killing it at the moment so he’s definitely a worthy opponent but I’m excited to get in there and show everyone what I’ve got.” Ben Triandafillou

Eaton strikes metro fame By Ben Triandafillou APPRENTICE jockey Jessica Eaton officially transferred to Mornington-based trainer Chris Meagher two weeks ago and has quickly claimed her first Melbourne city winner. Eaton, who has been on loan to Meagher for the past six months, continued her winning relationship with the in-form mare Famelist, for Mornington trainer Gary Carson, when saluting at Sandown on Wednesday 18 April. Eaton has been aboard the seven-year-old mare at all four of her starts this preparation and has racked up three victories since storming home first-up in a benchmark 64 at Sale at $51 to win on Tuesday 27 February. Eaton was full of praise for the mare and said she was even happier to get the win for the Mornington-based Caron’s stable. “It’s a pretty special horse and she has been in really great form recently,” Eaton said. “He (Gary Carson) has a small team at Mornington so it was great to get my first Melbourne city winner for them, and to be a part of the ride has been amazing.” It’s been a successful couple of weeks for the 24-year-old hoop who also claimed the National Apprentice Jockey Series for Victoria on the Wednesday prior to her win aboard Famelist. While Eaton concluded the series in Perth with a short-neck second aboard Scoreline, she had done

enough to clinch the title and topped it off with her maiden city win aboard the Stephen Rowe-trained Classi Survivor ($17) in the final race of the day. “Being able to go to another state and compete against other jockeys is an incredible experience,” she said. “Meeting new people and seeing different jockeys, you can learn a lot. There were apprentice coaches from every state there and I can’t thank Matt Pumpa (Racing Victoria Apprentices’ coach) enough for his support.” Eaton is hoping to keep her hot run going and said that it’s great to be back in a busy environment like Mornington. “There is probably about three to four trainers at Stawell and before that, I used to ride at Caulfield so it’s great to be back in this type of environment,” she said. “I’m getting a lot of support from local trainers and they are all going at a good strike rate at the moment, so it helps to get good rides for good trainers. “He’s (Chris Meagher) been really good to me and lets me try and get rides for a lot of other trainers and having that support from a trainer who supports you and lets you take up those opportunities is brilliant.” Eaton currently sits at sixth on the Victorian Apprentice Jockey Premiership with 34 winners for the season.