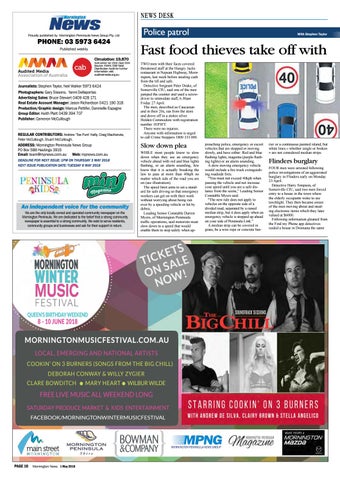 Fast food thieves take off with TWO men with their faces covered threatened staff at the Hungry Jacks restaurant in Nepean Highway, Mornington, last week before stealing cash from the till and safe. Detective Sergeant Peter Drake, of Somerville CIU, said one of the men jumped the counter and used a screwdriver to intimidate staff, 6.30am Friday 27 April. The men, described as Caucasian and in their 20s, ran from the store and drove off in a stolen silver Holden Commodore with registration number 1EP3FT. There were no injuries. Anyone with information is urged to call Crime Stoppers 1800 333 000.

WHILE most people know to slow down when they see an emergency vehicle ahead with red and blue lights flashing, or an alarm sounding, few know that it is actually breaking the law to pass at more than 40kph no matter which side of the road you are on (see illustration). The speed limit aims to set a standard for safe driving so that emergency workers can get on with their work without worrying about being run over by a speeding vehicle or hit by debris. Leading Senior Constable Darren Myers, of Mornington Peninsula traffic operations, said motorists must slow down to a speed that would enable them to stop safely when ap-

proaching police, emergency or escort vehicles that are stopped or moving slowly, and have either: Red and blue flashing lights, magenta (purple flashing lights) or an alarm sounding. A slow moving emergency vehicle would include a fire truck extinguishing roadside fires. “You must not exceed 40kph when passing the vehicle and not increase your speed until you are a safe distance from the scene,” Leading Senior Constable Myers said. “The new rule does not apply to vehicles on the opposite side of a divided road, separated by a raised median strip, but it does apply when an emergency vehicle is stopped up ahead on your side of Peninsula Link.” A median strip can be covered in grass, be a wire rope or concrete bar-

rier or a continuous painted island, but white lines – whether single or broken – are not considered median strips.

Flinders burglary FOUR men were arrested following police investigations of an aggravated burglary in Flinders early on Monday 23 April. Detective Harry Simpson, of Somerville CIU, said two men forced entry to a house in the town where the elderly occupants woke to see torchlight. They then became aware of the men moving about and stealing electronic items which they later valued at $6000. Following information gleaned from the Find my Phone app detectives raided a house in Dromana the same