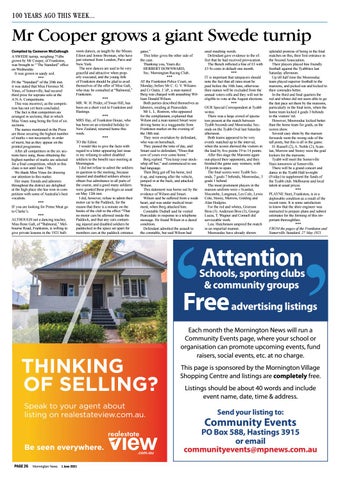 Mr Cooper grows a giant Swede turnip Compiled by Cameron McCullough A SWEDE turnip, weighing 7½lbs grown by Mr Cooper, of Frankston, was brought to ‘’The Standard” office on Wednesday. It was grown in sandy soil. *** IN the “Standard” of the 20th inst. it was stated that Miss Florence M. Vines, of Somerville, had secured third prize for soprano solo at the A.N.A. Competitions. This was incorrect, as the competition has not yet been concluded. The fact is that competitors are arranged in sections; that in which Miss Vines sung being the first of six sections. The names mentioned in the Press are those securing the highest number of marks – not necessarily in order of merit, but as they appear on the printed programme. After all competitors in the six sections have sung, those obtaining the highest number of marks are selected for a final competition, which in this class is not until June 17th. We thank Miss Vines for drawing our attention to this matter. Her many friends and admirers throughout the district are delighted at the high place she has won in competition with some of Australia’s best vocalists. *** IF you are looking for Prime Meat go to Clarke’s. *** ALTHOUGH not a dancing teacher, Miss Rene Galt, of “Balmoral,” Melbourne Road, Frankston, is willing to give private lessons in the 1921 ball-

room dances, as taught by the Misses Eileen and Jennie Brennan, who have just returned from London, Paris and New York. The new dances are said to be very graceful and attractive when properly executed, and the young folk of Frankston should be glad to avail themselves of the offer of Miss Galt, who may be consulted at “Balmoral,” Frankston. *** MR. W. H. Prider, of Swan Hill, has been on a short visit to Frankston and Hastings. *** MRS Hay, of Frankston House, who has been on an extended holiday to New Zealand, returned home this week. *** TO the Editor. I would like to give the facts with regard to a letter appearing last issue re my refusing to admit disabled soldiers to the benefit race meeting at Mornington. I did not refuse to admit the soldiers in question to the meeting, because injured and disabled soldiers always obtain free admittance to all parts of the course, and a good many soldiers were granted these privileges as usual on May 12th inst. I did, however, refuse to admit their motor car to the Paddock, for the reason that there is a minute on the books of the club to the effect “That no motor cars be allowed inside the Paddock, and that any cars containing injured and disabled soldiers be paddocked in the space set apart for members cars at the paddock cntrance

gates.” This letter gives the other side of the case. Thanking you, Yours &c. HERBERT DOWNWARD, Sec. Mornington Racing Club.. *** AT the Frankston Police Court, on Monday, before Mr C. G. V. Wiliams and Cr Oates. J.’sP., a man named Berg was charged with assaulting William Donald Wilson. Both parties described themselves as laborers, residing at Pearcedale. Mr L. L. Rostron, who appeared for the complainant, explained that Wilson and a man named Smart were driving home in a waggonette from Frankston market on the evening of the 18th inst. They were overtaken by defendant, who was on horseback. They passed the time of day, and Smart said to defendant, “Does that cow of yours ever come home.” Berg replied. “You keep your stockwhip off her,” and commenced to use bad language. Then Berg got off his horse, tied it up, and running after the vehicle, jumped in at the back, and attacked Wilson. This statement was borne out by the evidence of Wilson and Smart. Wilson said he suffered from a weak heart, and was under medical treatment, when Berg attacked him. Constable Diaball said he visited Pearcedale in response to a telephone message. He found Wilson in a dazed condition. Defendant admitted the assault to the constable, but said Wilson had

used insulting words. Defendant gave evidence to the effect that he had received provocation. The Bench inflicted a fine of £3 with £3 9s costs in default one month. *** IT is important that ratepayers should note the fact that all rates must be paid before the 10th June, otherwise their names will be excluded from the annual voters rolls and they will not be eligible to vote at the August elections. *** OUR Special Correspondent at Tyabb writes: There was a large crowd of spectators present at the match between Tyabb Seconds and Moorooduc Seconds on the Tyabb Oval last Saturday afternoon. Both teams appeared to be very evenly matched up to the interval, when the scores showed the visitors in the lead by five points 19 to 14 points. After this stage the Maroons again out-played their opponents, and they finished the game easy winners, with 18 points to spare. The final scores were Tyabb Seconds, 7 goals 7 behinds; Moorooduc, 5 goals 1 behind. The most prominent players in the maroon uniform were – Scanlan, Slocombe, Longmuir, Les Cole, Lewis Cole, Storey, Morrow, Golding and Alan Hodgins. For the red and whites, Grierson Bros (3). Anderson Bros (3), George Lucas, T. Wagner and Connell did serviceable work. Lou. Hutchinson umpired the match in an impartial manner. Mooruoduc have already shown

splendid promise of being in the final matches on this, their first entrance in the Second Association. Their players played fine friendly football against the Tyabbites last Saturday afternoon. Up till half time the Moorooduc team played superior football to the maroons, and picked out and kicked to their comrades better. In the third and final quarters the red and whites did not seem able to go the fast pace set them by the maroons, particularly in the final term, when the home team kicked 4 goals 3 behinds to the visitors’ nil. However, Moorooduc kicked better than the home team for goals, as the scores show. Several easy shots by the maroon forwards went the wrong side of the tall posts; but this is all in the game. H. Russell (2), A. Noble (2); Scanlan, Morrow and Storey were the goal kickers for the maroons. Tyabb will meet the Somerville Stars tomorrow at Somerville. There will be a grand concert and dance in the Tyabb Hall to-night (Friday) to supplement the funds of the Tyabb club. Melbourne and local talent at usual prices. *** PLAYNE Steet, Frankston, is in a deplorable condition as a result of the recent rains. It is some satisfaction to know that the shire engineer was instructed to prepare plans and submit estimates for the forming of this important thoroughfare. *** FROM the pages of the Frankston and Somerville Standard, 27 May 1921

Free advertising listings Each month the Mornington News will run a Community Events page, where your school or organisation can promote upcoming events, fund raisers, social events, etc. at no charge. This page is sponsored by the Mornington Village Shopping Centre and listings are completely free. Listings should be about 40 words and include event name, date, time & address.