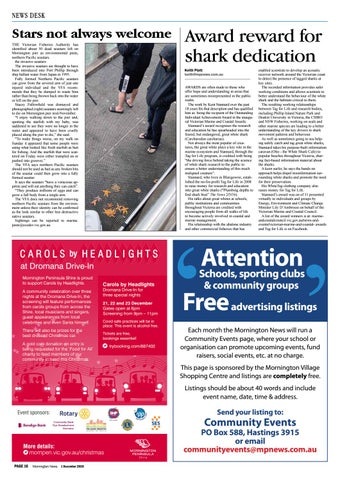 Stars not always welcome THE Victorian Fisheries Authority has identified about 50 dead seastars left on Mornington pier as environmental pests, northern Pacific seastars. the invasive seastars The invasive seastars are thought to have been introduced into Port Phillip through ship ballast water from Japan in 1995. Fully formed Northern Pacific seastars can grow from the severed arm of just one injured individual and the VFA recommends that they be dumped in waste bins rather than being thrown back into the water or left on the pier. Stacey Fallowfield was dismayed and photographed (right) seastars seemingly left to die on Mornington pier mid-November. “I enjoy walking down to the pier and, spotting the starfish with my baby, was saddened to see they were no longer in the water and appeared to have been cruelly placed along the pier to die,” she said. “To make things worse, on my walk on Sunday it appeared that some people were using what looked like fresh starfish as bait for fishing. And the starfish that were scattered on Friday were either trampled on or pushed into grooves.” The VFA says northern Pacific seastars should not be used as bait as any broken bits of the seastar could then grow into a fully formed seastar. It says the seastars “have a voracious appetite and will eat anything they can catch”. “They produce millions of eggs and can grow a full body from a single arm. The VFA does not recommend removing northern Pacific seastars from the environment unless their identity can be confirmed as the look similar to other less destructive native seastars. Sightings can be reported to marine. pests@ecodev.vic.gov.au

Keith Platt keith@mpnews.com.au AWARDS are often made to those who offer hope and understanding in areas that are sometimes misrepresented in the public realm. The work by Kent Stannard over the past 18 years fits that description and has qualified him as being the recipient of the Outstanding Individual Achievement Award in the inaugural Victorian Marine and Coastal Awards. Stannard’s award recognises the research and education he has spearheaded into the feared, but endangered, great white shark (Carcharodon carcharias). Not always the most popular of creatures, the great white plays a key role in the marine ecosystem and Stannard, through the Tag for Life program, is credited with being “the driving force behind taking the science of white shark research to the public to ensure a better understanding of this much maligned creature”. Stannard, who lives in Blairgowrie, established the no-for-profit Tag for Life in 2008 to raise money for research and education into great white sharks (“Plumbing depths to find shark beat” The News 2/5/16). His talks about great whites at schools, public institutions and communities throughout Victoria are credited with encouraging people from all walks of life to become actively involved in coastal and marine management. His relationship with the abalone industry and other commercial fisheries that has

C A R O L S by H E A D L I G H T S at Dromana Drive-In Mornington Peninsula Shire is proud to support Carols by Headlights. A community celebration over three nights at the Dromana Drive-In, the screening will feature performances from carols groups from across the Shire, local musicians and singers, guest appearances from local celebrities and even Santa himself. There will also be prizes for the best dressed Christmas car.

21, 22 and 23 December Gates open at 6pm Screening from 9pm – 11pm Covid safe practices will be in place. This event is alcohol free. Tickets are free, bookings essential!

A gold coin donation on entry is being requested for the ‘Food for All’ charity to feed members of our community in need this Christmas.

enabled scientists to develop an acoustic receiver network around the Victorian coast to detect the presence of tagged sharks at key sites. The recorded information provides safer working conditions and allows scientists to better understand the behaviour of the white shark and the habitats critical to them. The resulting working relationships between Tag for Life and research bodies, including Phillip Island Nature Park and Deakin University in Victoria, the CSIRO and NSW Fisheries, working on seals and other marine species are leading to a better understanding of the key drivers in shark movement patterns and behaviour. As well as sometimes going to sea helping safely catch and tag great white sharks, Stannard takes his purpose-built information caravan (Otto - the White Shark Cafe) to popular beaches throughout Victoria, sharing fact-based information material about the sharks. A keen surfer, he says the hands on approach helps dispel misinformation surrounding white sharks and promote the need for their preservation. His WhiteTag clothing company also raises money for Tag for Life. Stannard’s award was on of 11 presented virtually to individuals and groups by Energy, Environment and Climate Change Minister Lily D’Ambrosio on behalf of the Victorian Marine and Coastal Council. A list of the award winners is at: marineandcoastalcouncil.vic.gov.au/news-andevents/victorian-marine-and-coastal- awards and Tag for Life is on Facebook.

Free advertising listings Each month the Mornington News will run a Community Events page, where your school or organisation can promote upcoming events, fund raisers, social events, etc. at no charge. This page is sponsored by the Mornington Village Shopping Centre and listings are completely free. Listings should be about 40 words and include event name, date, time &amp; address.