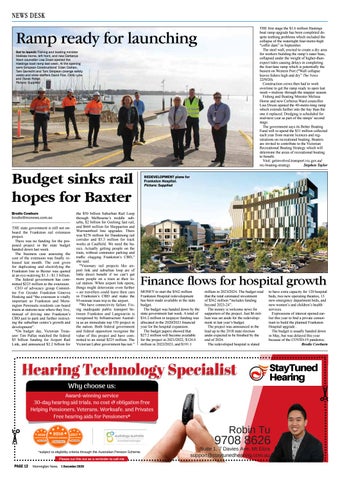 NEWS DESK THE first stage the $1.6 million Hastings boat ramp upgrade has been completed despite teething problems which included the collapse of the watertight four-metre-high “coffer dam” in September. The steel wall, erected to create a dry area for workers building the ramp’s outer base, collapsed under the weight of higher-thanexpect tides causing delays in completing the four-lane ramp which is potentially the busiest on Western Port (“Wall collapse leaves fishers high and dry” The News 22/9/20). Construction crews then had to work overtime to get the ramp ready to open last week – midway through the snapper season. Fishing and Boating Minister Melissa Horne and new Cerberus Ward councillor Lisa Dixon opened the 40-metre-long ramp which extends further into the bay than the one it replaced. Dredging is scheduled for mid-next year as part of the ramps’ second stage. The government says its Better Boating Fund will re-spend the $31 million collected each year from marine licences and registrations on recreational boating. Boaters are invited to contribute to the Victorian Recreational Boating Strategy which will determine the areas of recreational boating to benefit. Visit: getinvolved.transport.vic.gov.au/ rec-boating-strategy Stephen Taylor

Budget sinks rail hopes for Baxter Brodie Cowburn brodie@monews.com.au THE state government is still not onboard the Frankston rail extension project. There was no funding for the proposed project in the state budget handed down last week. The business case assessing the cost of the extension was finally released last month. The cost given for duplicating and electrifying the Frankston line to Baxter was quoted at an eye-watering $1.3 - $1.5 billion. The federal government has committed $225 million to the extension. CEO of advocacy group Committee For Greater Frankston Ginevra Hosking said “the extension is vitally important so Frankston and Mornington Peninsula residents can board trains at stations near where they live, instead of driving into Frankston’s CBD just to park and further restricting the suburban centre’s growth and development”. “On budget day, Victorian Treasurer Tim Pallas matched the federal $5 billion funding for Airport Rail Link, and announced $2.2 billion for

the $50 billion Suburban Rail Loop through Melbourne’s middle suburbs, $2 billion for Geelong fast rail, and $660 million for Shepparton and Warrnambool line upgrades. There was $276 million for Dandenong rail corridor and $5.5 million for track works at Caulfield. We need the basics. Actually getting people on the train, without commuter parking and traffic clogging Frankston’s CBD,” she said. “Visionary rail projects like airport link and suburban loop are of little direct benefit if we can’t get more people on a train at their local station. When airport link opens, things might deteriorate even further – air travellers could leave their cars in Frankston’s CBD and make the 95-minute train trip to the airport. “We have connectivity failure. Fixing inadequate public transport between Frankston and Langwarrin is recognised by Infrastructure Australia as an immediate top 150 project in the nation. Both federal government and federal opposition recognise the value of this project and have committed to an initial $225 million. The Victorian Labor government has not.”

Finance flows for hospital growth MONEY to start the $562 million Frankston Hospital redevelopment has been made available in the state budget. The budget was handed down by the state government last week. A total of $16.2 million in taxpayer funding was allocated in the 2020/2021 financial year for the hospital expansion. The budget papers showed that $27.2 million will become available for the project in 2021/2022, $124.6 million in 2022/2023, and $191.1

million in 2023/2024. The budget read that the total estimated investment of $562 million “includes funding beyond 2023-24”. The money is welcome news for supporters of the project. Just $6 million was set aside for the redevelopment in last year’s budget. The project was announced in the lead up to the 2018 state election andis expected to be finished by the end of 2024. The redeveloped hospital is slated

to have extra capacity for 120 hospital beds, two new operating theatres, 13 new emergency department beds, and new women’s and children’s health services. Expressions of interest opened earlier this year to find a private consortium to build the planned Frankston Hospital upgrade . The budget is usually handed down in May, but was delayed this year because of the COVID-19 pandemic. Brodie Cowburn