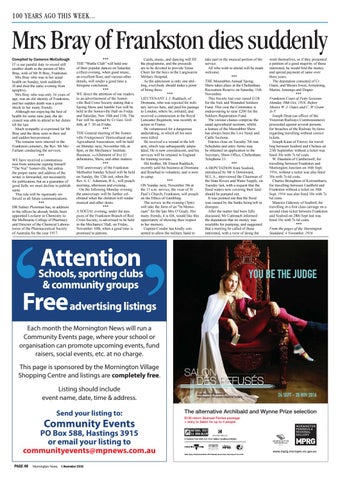 Mrs Bray of Frankston dies suddenly Compiled by Cameron McCullough IT is our painful duty to record still another death in the person of Mrs Bray, wife of Mr H Bray, Frankston. Mrs Bray who was in her usual health on Sunday, took suddenly ill and died the same evening from apoplexy. Mrs Bray who was only 54 years of age, was an old identity of Frankston, and her sudden death was a great shock to her many friends. Although not enjoying the best of health for some time past, the deceased was able to attend to her duties till the last. Much sympathy is expressed for Mr Bray and the three sons in their sad and sudden bereavemeut. The remains were interred in the Frankston cemetery, the Rev. Mr McFarlane conducting the services. *** WE have received a communication from someone signing himself “The Nut” Somerville, but unless the proper name and address of the writer is forwarded, not necessarily for publication, but as a guarantee of good faith, we must decline to publish same. This rule will be rigorously enforced in all future communications. *** DR Sidney Plowman has, in addition to the offices he already holds, been appointed Lecturer in Chemistry to the Melbourne College of Pharmacy and Director of the Chemical Laboratories of the Pharmaceutical Society of Australia for the year 1917.

*** THE “Wattle Club” will hold one of their popular dances on Saturday a (this) evening, when good music, an excellent floor, and various other details, will render a good time a foregone conclusion. *** WE direct the attention of our readers to an advertisement of the Somerville Red Cross Society stating that a Spring Show and Jumble Fair will be held in the Somerville Hall on Friday and Saturday, Nov 10th and 11th. The Fair will be opened by Cr Geo. Griffeth, at 7. 30 on Friday. *** THE General meeting of the Somerville Fruitgrowers’ Horticultural and Agricultural Association, will be held on Monday next, November 6th, at 8pm, in the Mechanics’ Institute. Business: —Allotment of five £5 debentures, Show, and other matters. *** THE anniversary of the Frankston Methodist Sunday School will be held on Sunday, the 12th inst, when the Rev A. C. Adamson, B A., will preach morning, afternoon and evening. On the following Monday evening the anniversary will be further celebrated when the children will render musical and other items. *** A SOCIAL evening, under the auspices of the Frankston Branch of Red Cross Society, is advertised to be held in the Mechanics’ Hall, on Friday, November 10th, when a good time is promised to patrons.

Cards, music, and dancing will fill the programme, and the proceeds are to be devoted to provide Xmas Cheer for the boys in the Langwarrin Military Hospital. As the admission is only one shilling, everybody should make a point of being there. *** LIEUTENANT J. J. Rudduch, of Dromana, who was rejected for military service here, and paid his passage to London, where he, enlisted, and received a commission in the Royal Lancaster Regiment, was recently in action in France. He volunteered for a dangerous undertaking, in which all his men were killed. He received a a wound in the left arm, which was subsequently amputated. He is now convalescent, and his services will be retained in England for training recruits. His brother, Mr Ernest Rudduch, recently sold his business at Dromana and Rosebud to volunteer, and is now in camp. *** ON Sunday next, November 5th at the 11 a.m. service, the vicar of St Paul’s Church, Frankston, will preach on the Ethics of Gambling. The service in the evening (7pm) will take the form of an “In Memoriam” for the late Mrs O’Grady. Her many friends, it is felt, would like this opportunity of showing their respect to her memory. Captain Condor has kindly consented to allow the military band to

take part in the musical portion of the service. All who wish to attend will be made welcome. *** THE Moorabbin Annual Spring Show takes place at the Cheltenham Recreation Reserve on Saturday 11th November. This Society last year raised £138 for the Sick and Wounded Soldiers Fund. This year the Committee is endeavouring to raise £200 for the Soldiers Repatriation Fund. The various classes comprise the usual agricultural sections, whilst a feature of the Moorabbin Show has always been the Live Stock and Cattle Sections. Entries close on Tuesday 7th inst. Schedules and entry forms may be obtained on application to the Secretary, Show Office, Cheltenham. Telephone 21. *** A DEPUTATION from Seaford, introduced by Mr A Downward, M.L.A., interviewed the Chairman of the State Rivers and Water Supply, on Tuesday last, with a request that the flood waters now covering their land should be pumped out. It was pointed out that the flood was caused by the banks being left in disrepair. After the matter had been fully discussed, Mr Cattenach informed the deputation that no money was available for pumping, and suggested that a meeting be called of those interested, with a view of doing the

work themselves, or if they presented a petition of a good majority of those interested, he would find the money and spread payment of same over three years. The deputation consisted of Cr Oates, and Messrs Irwin, Armstrong, Martin, Jennings and Draper. *** Frankston Court of Petty Sessions. Monday 30th Oct, 1916. Before Messrs W. J. Oates and C. W Grant Js P. Joseph Dean (an officer of the Victorian Railways Commissioners) proceeded against several persons for breaches of the Railway by-laws regarding travelling without correct tickets. Joseph Kaun of Fitzroy for travelling between Seaford and Chelsea on 25th September without a ticket was fined 30s with 7s 6d costs. W. Daudson of Camberwell, for travelling between Frankston and Mornington Junction on 16th Sept. 1916, without a ticket was also fined 30s with 7s 6d costs. Charles Broughton of Korrumburra for travelling between Caulfleld and Frankston without a ticket on 30th Sept. 1916 was also fined 30s with 7s 6d costs. Maurice Galeway of Seaford, for travelling in a first class carriage on a second class ticket between Frankston and Seaford on 28th Sept last was fined 10s with 7s 6d costs. *** From the pages of the Mornington Standard, 4 November, 1916

YOU BE THE JUDGE

Free advertising listings Each month the .PSOJOHUPO News will run a Community Events page, where your school or organisation can promote upcoming events, fund raisers, social events, etc. at no charge. This page is sponsored by the .PSOJOHUPO7JMMBHF 4IPQQJOH$FOUSF and listings are completely free. Listing should include event name, date, time & address.