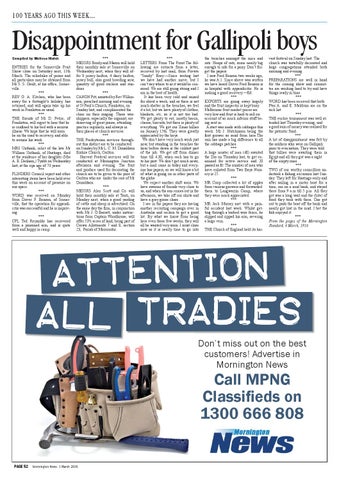 Disappointment for Gallipoli boys Compiled by Melissa Walsh ENTRIES for the Somerville Fruit Show close on Saturday next, 11th March. The schedules of prizes and all particulars may be obtained from Mr S. S. Gault, at his office, Somerville. *** REV G. A. Kitchen, who has been away for a fortnight’s holiday, has returned, and will again take up his work in Frankston as usual. *** THE friends of Mr D. Petrie, of Frankston, will regret to hear that he is confined to his bed with a serious illness. We hope that he will soon be on the road to recovery, and able to resume his work. *** MRS Unthank, relict of the late Mr William Unthank, of Hastings, died at the residence of her daughter (Mrs A. E. Denham,) Tyabb on Wednesday last, at the ripe age of 73 years. *** FLINDERS Council report and other interesting items have been held over this week on account of pressure on our space. *** WORD was received on Monday from Driver F. Benson, of Somerville, that the operation for appendicitis was successful and he is improving. *** CPL Ted Reynolds has recovered from a poisoned arm, and is quite well and happy in camp.

*** MESSRS Brody and Mason will hold their monthly sale at Somerville on Wednesday next, when they will offer 8 jersey heifers, 4 dairy heifers, jersey bull, also good breeding sow, quantity of good suckers and sundries. *** CANON Pitt, assisted by Rev Wilkinson, preached morning and evening at St Paul’s Church, Frankston, on Sunday last, and complimented the choir on their singing. These worshippers, especially the organist, are deserving of great praise, attending practice regularly, and always in their places at church services. *** THE Presbyterian services throughout this district are to be conducted on Sunday by Mr L. C. M. Donaldson Ershire Church, Carlton. Harvest Festival services will be conducted at Mornington Junction afternoon and evening. The fruit and produce used for decorating the church are to be given to the poor of Carlton who are under the care of Mr Donaldson. *** MESSRS Alex Scott and Co will hold their monthly sale at Tanti, on Monday next, when a good yarding of cattle and sheep is advertised. On the same day the firm, in conjunction with Mr J. G.Barratt, under instructions from Captain Woodhouse, will offer 53½ acres of land, being part of Crown Allotments 7 and 8, section 23, Parish of Moorooduc.

*** LETTERS From The Front.The following are extracts from a letter, received by last mail, from Private “Sandy” Bray:—Since writing last we have had another move, but I can’t say where to as it would be censored. We are still going strong and I am in the best of health. It has been very cold and rained for about a week, and as there is not much shelter in the trenches, we feel it a bit, but we have plenty of clothes, blankets, etc, so it is not too bad. We get plenty to eat, mostly bacon, cheese, biscuits, but there is plenty of everything. We got our Xmas billies on January 15th. They were greatly appreciated by the boys. We don’t have very much work just now, but standing in the trenches the hour before dawn is the coldest part of the job. We get off from dinner time till 4.30, when each has to go to his post. We don’t get much news, but a mail came in today and everyone has papers, so we will know a bit of what is going on in other parts of the globe. We expect another shift soon. We have swarms of friends very close to us, and when the sun comes out in the afternoon, we take off our shirts and have a gray goose chase. I see in the papers they are having another recruiting campaign over in Australia and reckon to get a good lot. By what we know from being here even these few weeks, they will all be wanted very soon. I must close now as it is nearly time to go into

the trenches amongst the mice and rats. Heaps of rats, some nearly big enough to ride for a pony. Don’t forget the papers. I saw Fred Benson two weeks ago, he was A.1. Since above was written we have heard Driver Fred Benson is in hospital with appendicitis. He is making a good recovery.—Ed. *** EXPORTS are going away largely and the fruit inspector is kept busy. Melbourne fruit market prices are very low and fruit is hard to sell on account of so much inferior stuff being sent in. A start was made with cabbages this week. Mr J. Hutchinson being the first grower so send from here.The rain has made a big difference to all the cabbage patches. *** A large muster of men (48) awaited the Drs on Thursday last, to get examined for active service and 20 passed as fit. The number of men who have enlisted from Two Bays Nursery is 25. *** MR Coop collected a lot of apples from various growers and forwarded them to Langwarrin Camp, where they were much appreciated. *** MR Jack Murray met with a painful accident last week. Whilst getting through a barbed wire fence, he slipped and ripped his arm, severing a large vein. *** THE Church of England held its har-

vest festival on Sunday last. The church was tastefully decorated and large congregations attended both morning and evening. *** PREPARATIONS are well in hand for the coming show and committee are working hard to try and have things ready in time. *** WORD has been received that both Ptes A. and E. Meldrum are on the sick list. *** THE euchre tournament was well attended last Thursday evening, and a good sum of money was realised for the patriotic fund. *** A lot of disappointment was felt by the soldiers who were on Gallipoli prior to evacuation. They were told that billies were awaiting them in Egypt and all they got was a sight of the empty ones. *** TWO of our worthy councillors undertook a fishing excursion last Sunday. They left for Hastings early and after sailing in a motor boat for a time, ran on a mud bank, and stayed there from 9 a.m till 5 p.m All they got was a long wait and the (bite) of food they took with them. One got out to push the boat off the bank and nearly got lost in the mud. I bet the fish enjoyed it. *** From the pages of the Mornington Standard, 4 March, 1916