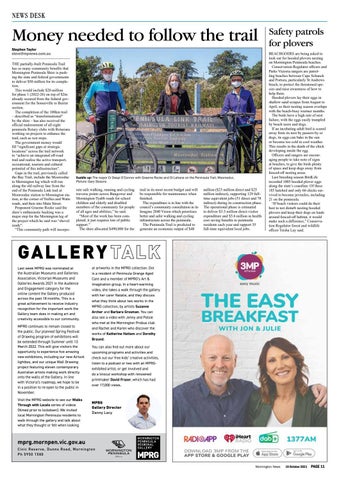 Money needed to follow the trail Stephen Taylor steve@mpnews.com.au THE partially-built Peninsula Trail has so many community benefits that Mornington Peninsula Shire is pushing the state and federal governments to deliver $50 million for its completion. This would include $20 million for phase 1 (2022-26) on top of $2m already secured from the federal government for the Somerville to Baxter section. The completion of the 100km trail – described as “transformational” by the shire – has also received the official endorsement of all eight peninsula Rotary clubs with Rotarians working on projects to enhance the trail, such as rest stops. The government money would fill “significant gaps at strategic locations” across the trail network to “achieve an integrated off-road trail and realise the active transport, recreational, tourism and cultural potential of this infrastructure”. Gaps in the trail, previously called the Bay Trail, include the Moorooduc to Mornington leg which will run along the old railway line from the end of the Peninsula Link trail at Moorooduc station to Mornington station, at the corner of Yuilles and Watts roads, and then into Main Street. Proponent Graeme Rocke said the shire’s enthusiastic backing was a major step for the Mornington leg of the project which he said was “shovel ready”. “This community path will incorpo-

rate safe walking, running and cycling traverse points across Bungower and Mornington-Tyabb roads for school children and elderly and disabled members of the community for people of all ages and abilities,” he said. “Most of the work has been completed, it just requires lots of public support.” The shire allocated $490,000 for the

trail in its most recent budget and will be responsible for maintenance when finished. The expenditure is in line with the council’s community consultation in its Imagine 2040 Vision which prioritises better and safer walking and cycling infrastructure across the peninsula. The Peninsula Trail is predicted to generate an economic output of $48

Safety patrols for plovers BEACHGOERS are being asked to look out for hooded plovers nesting on Mornington Peninsula beaches. Conservation Regulator officers and Parks Victoria rangers are patrolling beaches between Cape Schanck and Portsea, particularly St Andrews beach, to protect the threatened species and raise awareness of how to help them. Hooded plovers lay their eggs in shallow sand scrapes from August to April, so their nesting season overlaps with the beach-busy warmer months. The birds have a high rate of nest failure, with the eggs easily trampled by beach users and dogs. If an incubating adult bird is scared away from its nest by passers-by or dogs, its eggs can bake in the sun or become too cold in cool weather. This results in the death of the chick developing inside the egg. Officers and rangers are encouraging people to take note of signs at beaches, to give the birds plenty of space and keep dogs away from fenced-off nesting areas. Last breeding season BirdLife recorded 1003 hooded plover eggs along the state’s coastline. Of these 185 hatched and only 66 chicks survived to become juveniles, including 21 on the peninsula. “If beach visitors could do their best to not disturb nesting hooded plovers and keep their dogs on leads around fenced-off habitat, it would make such a difference,” Conservation Regulator forest and wildlife officer Teisha Lay said.

GALLERY TALK Last week MPRG was nominated at the Australian Museums and Galleries Association, Victorian Museums and Galleries Awards 2021 in the Audience and Engagement category for the online content the Gallery produced across the past 18 months. This is a great achievement to receive industry recognition for the important work the Gallery team does in making art and creativity accessible to our community. MPRG continues to remain closed to the public. Our planned Spring Festival of Drawing program of exhibitions will be extended through Summer until 13 March 2022. This will give visitors the opportunity to experience five amazing new exhibitions, including our new Airlock lightbox, and our unique Wall Drawing project featuring eleven contemporary Australian artists making work directly onto the walls of the Gallery. In line with Victoria’s roadmap, we hope to be in a position to re-open to the public in November. Visit the MPRG website to see our Walks Through with Locals series of videos (filmed prior to lockdown). We invited local Mornington Peninsula residents to walk through the gallery and talk about what they thought or felt when looking

at artworks in the MPRG collection. Dot is a resident of Peninsula Grange Aged Care and a member of MPRG’s Art &amp; Imagination group. In a heart-warming video, she takes a walk through the gallery with her carer Natalie, and they discuss what they think about two works in the MPRG collection, by artists Suzanne Archer and Barbara Grosman. You can also see a video with Jenny and Patsie who met at the Mornington Probus club and Rachel and Karen who discover the works of Katherine Hattam and Dorothy Braund. You can also find out more about our upcoming programs and activities and check out our free kids’ creative activities, listen to a podcast or two with an MPRGexhibited artist, or get involved and do a linocut workshop with renowned printmaker David Frazer, which has had over 17,000 views.