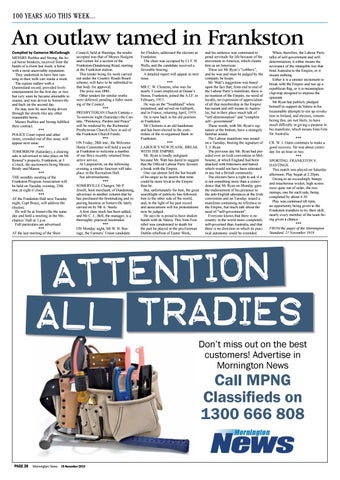 An outlaw tamed in Frankston Compiled by Cameron McCullough MESSRS Peebles and Strong, the local horse breakers, received from the hands of a client last week, a horse with a most unenviable reputation. They undertook to have him running in their milk cart inside a week. The equine outlaw with a Queensland record, provided lively entertainment for the first day or two but very soon he became amenable to reason, and was driven to Somerville and back on the second day. He may now be seen being driven through the streets like any other reasonable horse. Messrs Peebles and Strong fulfilled their contract. *** POLICE Court report and other items, crowded out of this issue, will appear next issue. *** TOMORROW (Saturday), a clearing sale is advertised to take place on Mr Renouf’s property, Frankston, at 3 o’clock, the auctioneers being Messrs Brody and Mason. *** THE monthly meeting of the Frankston Progress Association will be held on Tuesday evening, 25th inst, at eight o’clock. *** AT the Frankston Hall next Tuesday night, Capt Bruce, will address the electors. He will be at Somerville the same day and hold a meeting in the Mechanics’ Hall at 3 p.m. Full particulars are advertised. *** AT the last meeting of the Shire

Council, held at Hastings, the tender accepted was that of Messrs Hodgins and Gomm for a section of the Frankston-Dandenong Road, starting at the Frankston station. This tender being for work carried out under the Country Roads Board scheme, will have to be submitted to that body for approval. The price was £886. Other tenders for similar works were deferred, pending a fuller meeting of the Council. *** PRESBYTERIAN Church Cantata – To-morrow night (Saturday) the Cantata, “Penitence, Pardon and Peace” will be rendered by the Richmond Presbyterian Church Choir in aid of the Frankston Church Funds. *** ON Friday, 28th inst., the Welcome Home Committee will hold a social at Frankston to welcome a number of our Boys recently returned from active service. At Langwarrin, on the following evening, a similar function will take place in the Recreation Hall. See advertisements. *** SOMERVILLE Changes. Mr P. Jewell, boot merchant, of Dandenong, advertises in another column that he has purchased the bootmaking and repairing business at Somerville lately carried on by Mr A. Steele. A first class stock has been added, and Mr C. L. Bell, the manager, is a thoroughly practical bootmaker. *** ON Monday night, Mr W. H. Burrage, the Farmers’ Union candidate

for Flinders, addressed the electors at Frankston. The chair was occupied by Cr F. H. Wells, and the candidate received a favorable hearing. A detailed report will appear in next issue. *** MR C. W. Clemens, who was for nearly 3 years employed at Deane’s Stores, Frankston, joined the A.I.F. in February, 1915. He was on the “Southland” when torpedoed, and served on Gallipoli, and in France, returning April, 1919. He is now back in his old position in Frankston. Mr Clemens is an old bandsman and has been elected to the committee of the re-organised Bank in Frankston.. *** LABOUR’S NEW PLANK. BREAK WITH THE EMPIRE. Mr. Ryan is loudly indignant because Mr. Watt has dared to suggest that the Official Labour Party favours a break with the Empire. One can almost feel the hot breath of his anger as he asserts that none could be more loyal to the Empire than he. But, unfortunately for him, the great searchlight of publicity has followed him to the other side of the world, and, in the light of his past record and associations will his protestations now be judged. He says he is proud to have shaken hands with de Valera. This Sinn Fein rebel was condemned to death for the part he played in the pro-German Dublin rebellion of Easter Week,

and his sentence was commuted to penal servitude for life because of the movement in America, which claims him as an American. These are Mr Ryan’s “cobbers”, and he was and must be judged by the company he keeps. Mr. Watt’s suggestion was based upon the fact that, from end to end of the Labour Party’s manifesto, there is no mention of the Empire, no word of loyalty, no expression of appreciation of all that membership in the Empire has meant and still means to Australia; but in their place much talk of “self-determination” and “complete self - government”. These words, with Mr. Ryan’s signature at the bottom, have a strangely familiar sound. The Labour manifesto was issued on a Tuesday, bearing the signature of T. J. Ryan. The previous day Mr. Ryan had presided over an Irish convention in Melbourne, at which England had been attacked with bitterness and hatred which would not have been tolerated in any but a British community. The electors have a right to ask if it is not something more than a coincidence that Mr Ryan on Monday gave the endorsement of his presence to the anti-English utterances at the Irish convention and on Tuesday issued a manifesto containing no reference to the Empire, but much talk about the need of “self-government”. Everyone knows that there is no country in the world more completely self-governed than Australia, and that there is no direction in which its practical autonomy could be extended.

When, therefore, the Labour Party talks of self-government and selfdetermination, it either means the severance of the intangible ties that bind Australia to the Empire, or it means nothing. Either it is a sinister incitement to break with the Empire and run up a republican flag, or it is meaningless clap-trap designed to impress the ignorant. Mr Ryan has publicly pledged himself to support de Valera in his treasonable attempts to stir up revolution in Ireland, and electors, remembering this, are not likely, to have much difficulty in giving a purpose to his manifesto, which means Sinn Fein for Australia. *** CR. W. J. Oates continues to make a good recovery. He was about yesterday for an hour or two. *** SPORTING. FRANKSTON V. HASTINGS. This match was played on Saturday afternoon. Play began at 2.20pm. Owing to an exceedingly bumpy and treacherous wicket, high scores were quite out of order, the two innings, one for each side, being completed by about 4.30. Play was continued till 6pm, an opportunity being given to the Frankston trundlers to try their skill, nearly every member of the team being given a chance. *** FROM the pages of the Mornington Standard, 21 November 1919