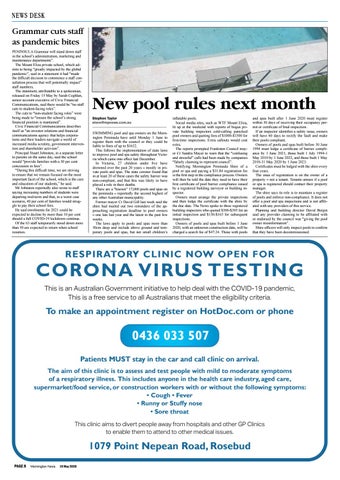 Grammar cuts staff as pandemic bites PENINSULA Grammar will stand down staff in the school’s administration, marketing and maintenance departments”. The Mount Eliza private school, which admits to being “greatly impacted by the global pandemic”, said in a statement it had “made the difficult decision to commence a staff consultation process that will potentially impact” staff numbers. The statement, attributable to a spokesman, released on Friday 15 May by Sarah Coghlan, senior account executive of Civic Financial Communications, said there would be “no staff cuts to student-facing roles”. The cuts to “non-student facing roles” were being made to “ensure the school’s strong financial position is mantained”. Civic Financial Communications describes itself as “an investor relations and financial communications agency that helps corporations and their leaders navigate a world of increased media scrutiny, government intervention and shareholder activism”. Principal Stuart Johnston, in a separate letter to parents on the same day, said the school would “provide families with a 30 per cent concession in fees”. “During this difficult time, we are striving to ensure that we remain focused on the most important facet of the school, which is the care and education of our students,” he said. Mr Johnston reportedly also wrote to staff saying increasing numbers of students were departing mid-term and that, in a worst case scenario, 40 per cent of families would struggle to pay their school fees. He said enrolments for 2021 could be expected to decline by more than 10 per cent should a full COVID-19 lockdown continue. Of the 63 staff temporarily stood down more than 50 are expected to return when school resumes.

New pool rules next month Stephen Taylor steve@mpnews.com.au SWIMMING pool and spa owners on the Mornington Peninsula have until Monday 1 June to register them with the council or they could be liable to fines of up to $1652. This follows the implementation of state laws to improve pool and spa safety throughout Victoria which came into effect last December. In Victoria, 27 children under five have drowned over the past 20 years – mostly in private pools and spas. The state coroner found that in at least 20 of these cases the safety barrier was non-compliant, and that this was likely to have played a role in their deaths. There are a “known” 17,000 pools and spas on the peninsula – reportedly the second highest of any other Australian municipality. Former mayor Cr David Gill last week said the shire had mailed out two reminders of the approaching registration deadline to pool owners – one late last year and the latest in the past few weeks. The laws apply to pools and spas more than 30cm deep and include above ground and temporary pools and spas, but not small children’s

inflatable pools. Social media sites, such as WTF Mount Eliza, lit up at the weekend with reports of bogus private building inspectors cold-calling panicked pool owners and quoting fees of $1000-$1500 for first-time inspections. Extra callouts would cost extra. The reports prompted Frankston Council mayor Cr Sandra Mayer to warn that the “confusing and stressful” calls had been made by companies “falsely claiming to represent council”. Notifying Mornington Peninsula Shire of a pool or spa and paying a $31.84 registration fee is the first step in the compliance process. Owners will then be told the date they need to have their first certificate of pool barrier compliance issued by a registered building surveyor or building inspector. Owners must arrange the private inspections and then lodge the certificate with the shire by the due date. The News spoke to three registered building inspectors who quoted $300-$395 for an initial inspection and $150-$165 for subsequent inspections. Owners of pools and spas built before 1 June 2020, with an unknown construction date, will be charged a search fee of $47.24. Those with pools

and spas built after 1 June 2020 must register within 30 days of receiving their occupancy permit or certificate of final inspection. If an inspector identifies a safety issue, owners will have 60 days to rectify the fault and make their pools compliant. Owners of pools and spas built before 30 June 1994 must lodge a certificate of barrier compliance by 1 June 2021; those built 1 July 1994-1 May 2010 by 1 June 2022, and those built 1 May 2010-31 May 2020 by 1 June 2023. Certificates must be lodged with the shire every four years. The onus of registration is on the owner of a property – not a tenant. Tenants unsure if a pool or spa is registered should contact their property manager. The shire says its role is to maintain a register of pools and enforce non-compliance. It does not offer a pool and spa inspections and is not affiliated with any providers of this service. Planning and building director David Bergin said any provider claiming to be affiliated with or endorsed by the council was “giving the pool owner misinformation”. Shire officers will only inspect pools to confirm that they have been decommissioned.

0436 033 507 Patients MUST stay in the car and call clinic on arrival. The aim of this clinic is to assess and test people with mild to moderate symptoms of a respiratory illness. This includes anyone in the health care industry, aged care, supermarket/food service, or construction workers with or without the following symptoms: • Cough • Fever • Runny or Stuffy nose • Sore throat This clinic aims to divert people away from hospitals and other GP Clinics to enable them to attend to other medical issues.