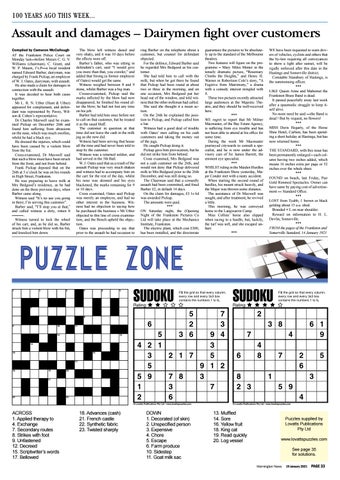 Assault and damages – Dairymen fight over customers Compiled by Cameron McCullough AT the Frankston Police Court on Monday last—before Messrs C. G. V. Williams (chairman), C. Grant, and W. P. Mason, J’s.P—a local resident named Edward Barber, dairyman, was charged by Frank Pickup, an employee of W. J. Oates, dairyman, with assault. He also made a claim for damages in connection with the assault. It was decided to hear both cases together. Mr L. R. N. Utber (Hunt &amp; Utber) appeared for complainant, and defendant was represented by Pavey, Wilson &amp; Cohen’s representative. Dr Charles Maxwell said he examined Pickup on December 26th and found him suffering from abrasions on the nose, which was much swollen, whilst he had a black eye. He dressed the injuries, which could have been caused by a violent blow from the fist. Cross-examined, Dr Maxwell said that such a blow must have been struck from the front, and not from behind. Frank Pickup deposed that on the 26th at 5 o’clock he was on his rounds in High Street, Frankston. He was preparing to leave milk at Mrs Bedgood’s residence, as he had done on the three previous days, when Barber came along. Witness said “It’s no use you going in there; I’m serving this customer”. Barber said, “I’ll stop you at that,” and called witness a dirty, rotten b ———. Witness turned to lock the wheel of his cart, and, as he did so, Barber struck him a violent blow with his fist, and knocked him down.

The blow left witness dazed and very shaky, and it was 10 days before the effects wore off. Barber’s father, who was sitting in defendant’s cart, said “I would give you more than that, you crawler,” and added that Strong (a former employee of Oates) would get the same. Witness weighed between 8 and 9 stone, whilst Barber was a big man. Crosss-examined, Pickup said the marks inflicted by the blow had now disappeared; he finished his round after the blow; he had not lost any time on his job. Barber had told him once before not to call on that customer, but he treated it as the usual bluff. The customer in question at that time did not leave the cash in the milk jug as she now did. Witness had been serving that house all the time and had never been told to stop by the customer. Witness was a returned soldier, and had served in the 5th Batl. W. J. Oates said that as a result of the assault Pickup was very much shaken and witness had to accompany him on the cart for the rest of the day, whilst his nose was skinned and his eyes blackened, the marks remaining for 9 or 10 days. Cross examined, Oates said Pickup was merely an employee, and had no other interest in the business. Witness had no objection to saying how he purchased the business – Mr Utber objected to this line of cross examination, and the Bench upheld the objection. Oates was proceeding to say that prior to the assault he had occasion to

ring Barber on the telephone about a customer, but counsel for defendant objected. For the defence, Edward Barber said he regarded Mrs Bedgood as his customer. She had told him to call with the milk, but when he got there he found that Pickup had been round at about two or three in the morning, and on one occasion, Mrs Bedgood put her head out of the window, and told witness that the other milkman had called. She said she thought it a mean action. On the 26th he explained the position to Pickup, and Pickup called him a liar. Witness had a good deal of trouble with Oates’ men calling on his cash customers and taking the money out of the jugs. He caught Pickup doing it. Pickup gave him provocation, but he did not strike him from behind. Cross examined, Mrs Bedgood was not a cash customer on the 26th, and would not deny that Pickup delivered milk to Mrs Bedgood prior to the 26th December, and was still doing so. The Chairman said that a cowardly assault had been committed, and fined Barber £2, in default 14 days. On the claim for damages, £3 1s 6d was awarded Pickup. The amounts were paid. *** ON Saturday night, the (Opening Night of the Frankston Pictures Co Ltd will take place at the Mechanics Institute, Frankston. The electric plant, which cost £300, has been installed, and the directorate

guarantees the pictures to be absolutely up to the standard of the Melbourne theatres. Two features will figure on the programme – Mary Miles Minter in the tensely dramatic picture, “Rosemary Climbs the Heights,” and Henry H. Warner in Robertson Cole’s story, “A Fugitive from Matrimony,” a drama with a comedy interest mingled with it. These two pictures recently attracted large audiences at the Majestic Theatre, and they should be well-received here. *** WE regret to report that Mr Milner Macmaster, of the Bay Estate Agency, is suffering from eye trouble and has not been able to attend at his office for some time. During the week Mr Macmaster journeyed citywards to consult a specialist, and he is now under the advisory care of Sir James Barrett, the eminent eye specialist. *** WHILST riding in the Maiden Hurdles at the Frankston Show yesterday, Major Conder met with a nasty accident. When starting the second round of hurdles, his mount struck heavily, and the Major was thrown some distance. The assistance of Dr Maxwell was sought, and after treatment, he revived a little. This morning, he was conveyed home to the Langwarrin Camp. Miss Collins’ horse also slipped when racing to a hurdle, but, luckily, the turf was soft, and she escaped unhurt. ***

WE have been requested to warn drivers of vehicles, cyclists and others that the by-law requiring all conveyances to show a light after sunset, will be rigidly enforced after this date in the Hastings and Somerville district. Constable Stansbury of Hastings, is the summonsing officer. *** LIKE Queen Anne and Mahomet the Frankston Brass Band is dead. It passed peacefully away last week after a spasmodic struggle to keep itself alive. No more need be said —the Band is dead ! But by request, no flowers! *** MISS Doris Hegarty, of the Horse Shoe Hotel, Carlton, has been spending a short holiday at Hastings, but has now returned home. *** THE STANDARD, with this issue has been permanently enlarged – each column having two inches added, which means 16 inches extra per page or 52 inches over the whole sheet. *** FOUND on beach, last Friday, Pair Gold Rimmed Spectacles. Owner can have same by paying cost of advertisement — Standard Office. *** LOST from Tyabb, 1 brown or black gelding about 15 a.u. shod. Branded &lt; L on near shoulder. Reward on information to H. L. Devlin, Somerville. *** FROM the pages of the Frankston and Somerville Standard, 14 January 1921