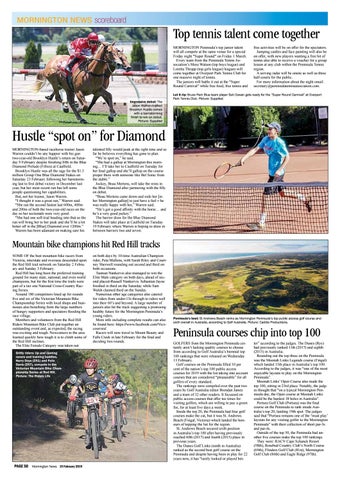 Top tennis talent come together MORNINGTON Peninsula’s top junior talent will all compete at the same venue for a special Friday night “Super Round“ on Friday 1 March. Every team from the Peninsula Tennis Association’s Moss Watson (top boys league) and Loretta Thrupp (top girls league) leagues will come together at Overport Park Tennis Club for one massive night of tennis. The juniors will battle it out at the “Super Round Carnival” while free food, free tennis and

free activities will be on offer for the spectators. Jumping castles and face painting will also be on offer, with new players wanting a free hit of tennis also able to receive a voucher for a group lesson at any club within the Peninsula Tennis region. A serving radar will be onsite as well as three half-courts for the public. For more information about the night email: secretary@peninsulatennisassociation.com.

Hustle “spot on” for Diamond MORNINGTON-based racehorse trainer Jason Warren couldn’t be any happier with his gun two-year-old Brooklyn Hustle’s return on Saturday 9 February despite finishing fifth in the Blue Diamond Prelude (Fillies) at Caulfield. Brooklyn Hustle was all the rage for the $1.5 million Group One Blue Diamond Stakes on Saturday 23 February following her barnstorming last to first debut victory in December last year, but her most recent run has left some people questioning her capabilities. But, not her trainer, Jason Warren. “I thought it was a great run,” Warren said. “She ran the second fastest last 600m, 400m and 200m of both the two-year-old races on the day so her sectionals were very good. “She had one soft trial heading into that so the run will bring her to her peak and she’ll be a lot better off in the [Blue] Diamond over 1200m.” Warren has been adamant on making sure his

talented filly would peak at the right time and so far he believes everything has gone to plan. “We’re spot on,” he said. “She had a gallop at Mornington this morning… I’ll take her to Caulfield on Tuesday for her final gallop and she’ll gallop on the course proper there with someone like Bel Sonic from the stable.” Jockey, Beau Mertens, will take the reins in the Blue Diamond after partnering with the filly on debut. “Beau Mertens came down and rode her [in her Mornington gallop] to just have a feel – he was really happy with her,” Warren said. “He’s got a good affinity with the horse… and he’s a very good jockey.” The barrier draw for the Blue Diamond Stakes will take place at Caulfield on Tuesday 19 February where Warren is hoping to draw in between barriers two and seven.

Mountain bike champions hit Red Hill tracks SOME OF the best mountain bike racers from Victoria, interstate and overseas descended upon the Red Hill trail network on Saturday 2 February and Sunday 3 February. Red Hill has long been the preferred training ground for many state, national, and even world champions, but for the first time the trails were part of a tier one National Cross-Country Racing Series. Around 180 competitors lined up for rounds five and six of the Victorian Mountain Bike Championship Series with local shops and businesses also benefiting from the large numbers of hungry supporters and spectators flooding the race village. Members and volunteers from the Red Hill Riders Mountain Bike Club put together an outstanding event and, as expected, the racing was exciting and tough. Newcomers to the area learned quickly how tough it is to climb some of the Red Hill inclines. The Elite Female Category was taken out Gritty riders: Up and coming racers and training buddies, Harry Doye (251) and Felix Davis (257), compete in the Victorian Mountain Bike Championship Series at Red Hill. Picture: The Riders Life

on both days by 10-time Australian Champion rider, Peta Mullens, with Sarah Riley and Courtney Sherwell rounding out second and third on both occasions. Tasman Nankervis also managed to win the Elite Male category on both days, ahead of second placed-Russell Nankervis. Sebastian Jayne finished in third on the Saturday while Sam Walsh claimed third on the Sunday. Numerous other age categories also catered for riders from under-13s through to riders well into their 60’s and beyond. A large number of juniors also hit the track suggesting a promising healthy future for the Mornington Peninsula’s young riders. More info including complete results can also be found here: https://www.facebook.com/Vicxcoseries/. Racers will now travel to Mount Beauty and Falls Creek in late February for the final and deciding two rounds.

Peninsula courses chip into top 100 GOLFERS from the Mornington Peninsula certainly aren’t lacking quality courses to choose from according to Golf Australia’s biennial top 100 rankings that were released on Wednesday 13 February. Golf courses on the Peninsula filled 10 per cent of the nation’s top 100 public access courses for 2019 with the list taking into account courses that are considered “pleasurable” for all golfers of every standard. The rankings were compiled over the past two years by Golf Australia editor Brendan James and a team of 32 other readers. It focussed on public access courses that offer tee times for visiting golfers, which are willing to pay a green fee, for at least five days a week. Inside the top 20, the Peninsula had four golf courses make the cut, but it was St. Andrews Beach (Fingal, Victoria) which landed the honours of topping the list for the region. St. Andrews Beach secured sixth position in Australia’s top 100 after having previously reached fifth (2017) and fourth (2015) place in previous years. The Dunes Golf Links (ninth in Australia) ranked as the second best golf course on the Peninsula and despite having been in play for 22 years now, it has “rarely looked or played bet-

ter” according to the judges. The Dunes (Rye) had previously ranked 11th (2017) and eighth (2015) in Australia. Rounding out the top three on the Peninsula was the Moonah Links Legends course (Fingal) which landed 15th place in Australia’s top 100. According to the judges, it was “one of the most enjoyable layouts to play on the Mornington Peninsula”. Moonah Links’ Open Course also made the top 100, sitting in 23rd place. Notably, the judges thought that “on a typical Mornington Peninsula day, the Open course at Moonah Links could be the hardest 18 holes in Australia”. Portsea Golf Club (Portsea) was the final course on the Peninsula to rank inside Australia’s top 20, landing 19th spot. The judges said that “Portsea remains one of the ‘must play’ layouts for any visiting golfer to the Mornington Peninsula” with their collection of short par-3s and par-4s. Outside of the top 50, the Peninsula had another five courses make the top 100 rankings. They were: RACV Cape Schanck Resort (58th), Rosebud Country Club’s North Course (69th), Flinders Golf Club (81st), Mornington Golf Club (84th) and Eagle Ridge (97th).