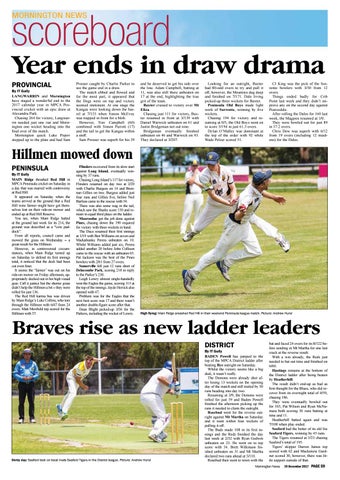 By IT Gully LANGWARRIN and Mornington have staged a wonderful end to the 2017 calendar year in MPCA Provincial cricket with an epic draw at Alexandra Park. Chasing 264 for victory, Langwarrin needed just one run and Mornington one wicket heading into the final over of the match. Mornington quick Luke Popov stepped up to the plate and had Sam

Prosser caught by Charlie Parker to see the game end in a draw. The match ebbed and flowed and for the most part, it appeared that the Dogs were on top and victory seemed imminent. At one stage the Kangas were looking down the barrel at 7/153 when Simon McEvoy was trapped in front for a blob. However, Trav Campbell (60) combined with Simon Parrott (17) and the tail to get the Kangas within a sniff. Sam Prosser was superb for his 39

and he deserved to get his side over the line. Adam Campbell, batting at 11, was also still there unbeaten on 17 at the end, highlighting the true grit of the team. Baxter cruised to victory over Mt Eliza. Chasing just 111 for victory, Baxter resumed in front at 3/139 with Daniel Warwick unbeaten on 61 and Justin Bridgeman not out nine. Bridgeman eventually finished unbeaten on 46 and Warwick on 93. They declared at 3/207.

Looking for an outright, Baxter had 80-odd overs to try and pull it off, however, the Mounties dug deep and finished on 7/171. Dale Irving picked-up three wickets for Baxter. Peninsula Old Boys made light work of Sorrento, winning by five wickets. Chasing 194 for victory and resuming at 0/5, the Old Boys went on to score 5/194 in just 61.3 overs. Dylan O’Malley was dominant at the top of the order with 92 while Wade Pelzer scored 51.

CJ King was the pick of the Sorrento bowlers with 3/30 from 12 overs. Things ended badly for Crib Point last week and they didn’t improve any on the second day against Pearcedale. After rolling the Dales for 160 last week, the Magpies resumed at 1/0. They were bowled out for just 89 in 57.2 overs. Chris Dew was superb with 6/12 from 19 overs (including 12 maidens) for the Dales.

By IT Gully MAIN Ridge thrashed Red Hill in MPCA Peninsula cricket on Saturday in a day that was marred with controversy at Red Hill. It appeared on Saturday when the teams arrived at the ground that a Red Hill wine farmer might have got themselves lost on their ride-on mower and ended up at Red Hill Reserve. You see, when Main Ridge batted at the ground last week for its 214, the ground was described as a “cow paddock”. From all reports, council came and mowed the grass on Wednesday – a great result for the Hillmen. However, in controversial circumstances, when Main Ridge turned up on Saturday to defend its first innings total, it noticed that the deck had been cut even finer. It seems the ‘farmer’ was out on his ride-on mower on Friday afternoon, appropriately decked out in his high visual gear. Call it justice but the shorter grass didn’t help the Hillmen a bit – they were rolled for just 136. The Red Hill karma bus was driven by Main Ridge’s Luke Collins, who tore through the Hillmen with 6/47 from 24 overs. Matt Merifield top scored for the Hillmen with 37.

Flinders recovered from its slow start against Long Island, eventually winning by 37 runs. Chasing Long Island’s 117 for victory, Flinders resumed on day two at 2/20 with Charlie Burgess on 14 and Brennan Gillies on two. Burgess added just four runs and Gillies five, before Neil Barfuss came to the rescue with 54. There was also some wag in the tail, which saw the Sharks score 150 and remain in equal third place on the ladder. Moorooduc got the job done against Pines, chasing down the 190 required for victory with three wickets in hand. The Ducs resumed their first innings at 1/19 with Ben Williams on seven and Madushanka Perera unbeaten on 10. Whilst Williams added just six, Perera added another 20 before John Collison came to the rescue with an unbeaten 65. Pat Jackson was the best of the Pines bowlers with 2/61 from 27 overs. Somerville fell just 12 runs short of Delacombe Park, scoring 218 in reply to the Parker’s 230. Leigh Lowry almost single-handedly won the Eagles the game, scoring 115 at the top of the innings. Jayde Herrick also opened with 47. Problem was for the Eagles that the next best score was 17 and there wasn’t another double-figure score after that. Dean Blight picked-up 3/56 for the Parkers, including the wicket of Lowry.

By IT Gully BADEN Powell has jumped to the top of the MPCA District ladder after beating Rye outright on Saturday. Whilst the victory seems like a big deal, it wasn’t really. The Demons were already shot after losing 13 wickets on the opening day of the match and still trailed by 50 runs heading into day two. Resuming at 3/9, the Demons were rolled for just 59 and Baden Powell finished the afternoon picking up the runs it needed to claim the outright. Rosebud went for the reverse outright against Mt Martha on Saturday and it went within four wickets of pulling it off. The Buds made 108 in its first innings and the Reds finished the day last week at 2/32 with Ryan Godwin unbeaten on 23. He went on to top score with 54. Brett Wilkinson finished unbeaten on 31 and Mt Martha declared two runs ahead at 5/110. Rosebud then went to town with the

bat and faced 24 overs for its 8/122 before sending in Mt Martha for one last crack at the reverse result. With a win already, the Reds just needed to bat out time and finished on 6/60. Hastings remains at the bottom of the District ladder after being beaten by Heatherhill. The result didn’t end-up as bad as first thought for the Blues, who did recover from its overnight total of 4/59, chasing 186. They were eventually bowled out for 165, Pat Wilson and Ryan McNamara both scoring 36 runs batting at nine and 11. Heatherhill batted again and was 7/108 when play ended. Seaford had the better of its old foe Seaford Tigers, winning by 45 runs. The Tigers resumed at 1/23 chasing Seaford’s total of 195. Tigers’ skipper Darren James top scored with 62 and Mackenzie Gardner scored 30, however, there was little support outside of that.