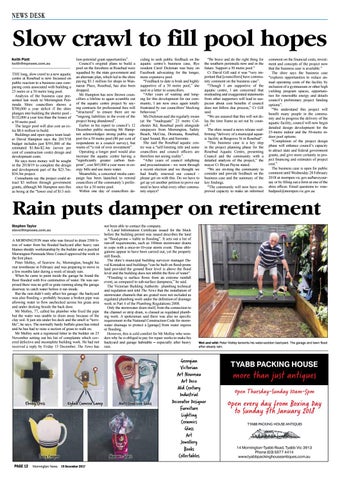 Slow crawl to fill pool hopes Keith Platt keith@mpnews.com.au THE long, slow crawl to a new aquatic centre at Rosebud is now focussed on public reaction to a business case comparing costs associated with building a 25 metre or a 50 metre long pool. Analysis of the business case presented last week to Mornington Peninsula Shire councillors shows a $700,000 a year deficit if the shire plunges into building the shorter pool $132,000 a year less than the losses of a 50 metre pool. The larger pool will also cost an extra $8.6 million to build. Buildings and open space team leader David Hampton says the 2017/18 budget includes just $591,000 of the estimated $1.8m-$2.4m (seven per cent of construction costs) design and development costs. He says more money will be sought in the 2018/19 to complete the design and development part of the $25.7m$34.3m project. Consultants say the project could attract $5 million through government grants, although Mr Hampton sees this as being at the “lower end of $13 mil-

lion potential grant opportunities”. Council’s original plans to build a pool on the foreshore at Rosebud were squashed by the state government and an alternate plan, which led to the shire paying $5.1 million for shops in Wannaeue Place, Rosebud, has also been dropped. Mr Hampton has now thrown councillors a lifeline to again scramble out of the aquatic centre project by saying contracts for professional fees will “structured” to ensure there are no “ongoing liabilities in the event of the project being abandoned”. Earlier in his report to council’s 12 December public meeting Mr Hampton acknowledges strong public support for a 50 metre pool (80 per cent of respondents to a council survey), but warns of “a risk of over investment”. Operating a longer pool would also increase the aquatic centre having a “significantly greater carbon footprint”, cost $45,000 a year more in energy bills and use more water. Meanwhile, a concerted media campaign has been launched to remind councillors of the community’s preference for a 50 metre pool. Within one day of councillors de-

ciding to seek public feedback on the aquatic centre’s business case, Rye resident Carol Dickman was busy on Facebook advocating for the longer, more expensive pool. “Feedback to date is brisk and highly supportive of a 50 metre pool,” she said in a letter to councillors. “After years of waiting and longing for this development for our community, I am now once again totally frustrated by our councillors’ blocking behaviour.” Ms Dickman said she regularly swam (at the “inadequate” 25 metre Colchester Rd, Rosebud pool) alongside ratepayers from Mornington, Safety Beach, McCrae, Dromana, Rosebud, Capel Sound, Rye and Sorrento. She said the Rosebud aquatic centre was a “self-limiting title and some councillors and council officers are therefore not seeing reality”. “After years of council infighting and procrastination - we went through a recent election and we thought we had finally renewed our council please get on with this. Do we have to get up yet another petition to prove our need to have what every other community enjoys?

“Be brave and do the right thing for the southern peninsula now and in the future. Support a 50 metre pool.” Cr David Gill said it was “very important that [councillors] have community comment on the business case”. “Though I am supportive of the aquatic centre, l am concerned that misleading and exaggerated statements from other supporters will lead to suspicion about cost benefits if council does not follow due process,” Cr Gill said. “We are assured that this will not delay the time frame as set out by council.” The shire issued a news release reaffirming “delivery of a municipal aquatic facility at Besgrove St in Rosebud”. “This business case is a key step in the project planning phase for the Rosebud Aquatic Centre, presenting Council and the community with a detailed analysis of the project,” the mayor Cr Bryan Payne stated. “We are inviting the community to consider and provide feedback on the business case and the summary of the key findings. “The community will now have improved capacity to make an informed

comment on the financial costs, investment and concepts of the project now that the business case is available.” The shire says the business case “explores opportunities to reduce annual operating costs of the facility by inclusion of a gymnasium or other high yielding program spaces, opportunities for renewable energy and details council’s preliminary project funding options”. “We understand this project will benefit many people in the community and to progress the delivery of the aquatic facility, council will now begin detailed design development for the 25-metre indoor and the 50-metre indoor pool options. “Completion of the project design phase will enhance council’s capacity to attract state and federal government grants, and give more certainty to project financing and estimates of project cost.” The business case is open for public comment until Wednesday 28 February 2018 at mornpen.vic.gov.au/haveyoursay or by filling out a form at one of the shire offices. Email questions to: rosebudpool@mornpen.vic.gov.au

Rain puts damper on retirement Stephen Taylor steve@mpnews.com.au A MORNINGTON man who was forced to drain 2500 litres of water from his flooded backyard after heavy rain blames shoddy workmanship by the builder and is puzzled Mornington Peninsula Shire Council approved the work in the first place. Peter Molloy, of Seaview Av, Mornington, bought his rear townhouse in February and was preparing to move in a few months later during a week of steady rain. When he came to paint inside the garage he found the floor flooded with five centimetres of water. He was surprised there was no grill or grate running along the garage doorway to catch water before it ran inside. But the rain didn’t only affect his garage: the backyard was also flooding – probably because a broken pipe was allowing water to flow unchecked across his grass area and under decking beside the back door. Mr Molloy, 77, called his plumber who fixed the pipe but the water was unable to drain away because of the clay soil. It just sits under his deck and the smell is “terrible”, he says. The normally hardy buffalo grass has rotted and he has had to raise a section of grass to walk on. Mr Molloy sent a registered letter to the builder on 25 November setting out his list of complaints which covered defective and incomplete building work. He had not received a reply by Friday 15 December. The News has

not been able to contact the company. A Land Information Certificate issued for the block before the building permit was issued describes the land as “flood-prone – liable to flooding”. It sets out a list of run-off requirements, such as 100mm stormwater drains to cope with a once-in-10-year storm event. These obligations appear to have been carried out, yet the property still floods. The shire’s municipal building surveyor manager David Kotsiakos said buildings “can be built on flood-prone land provided the ground floor level is above the flood level and the building does not inhibit the flow of water”. “Flooding is surface flows from an extreme rainfall event, as compared to sub-surface dampness,” he said. The Victorian Building Authority plumbing technical and regulation unit told The News that the installation of stormwater channels that are grated were not included as regulated plumbing work under the definition of drainage work in Part 4 of the Plumbing Regulations 2008. Only the stormwater drain itself, from the connection to the channel or strip drain, is classed as regulated plumbing work. A spokesman said there was also no specific requirement in the National Construction Code for stormwater drainage to protect a [garage] from water ingress or flooding. However, this is cold comfort for Mr Molloy who wonders why he is obliged to pay for repair works to make his backyard and garage habitable – especially after heavy rain.

Open every day from Boxing Day to Sunday 7th January 2018