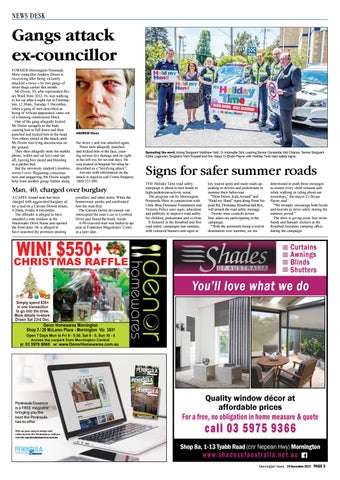 Gangs attack ex-councillor FORMER Mornington Peninsula Shire councillor Andrew Dixon is recovering after being viciously attacked – twice – by two gangs of street thugs earlier this month. Mr Dixon, 30, who represented Briars Ward from 2012-16, was walking to his car after a night out in Flemington, 12.30am, Tuesday 5 December, when a gang of men described as being of African appearance came out of a housing commission block. One of the gang allegedly kicked Mr Dixon savagely to the body causing him to fall down and then punched and kicked him to the head. Two others joined in the attack until Mr Dixon was lying unconscious on the ground. They then allegedly stole his mobile phone, wallet and car keys and ran off, leaving him dazed and bleeding in a garden bed. But the university student’s troubles weren’t over: Regaining consciousness and staggering, Mr Dixon sought help from another group further along

the street – and was attacked again. Three men allegedly punched and kicked him in the face, causing serious eye damage and no sight in his left eye for several days. He was treated in hospital for what he described as a “terrifying attack”. Anyone with information on the attack is urged to call Crime Stoppers 1800 333 000.

Signs for safer summer roads THE Holiday Time road safety campaign is about to turn heads in high-pedestrian-activity areas. The program run by Mornington Peninsula Shire in conjunction with Little Blue Dinosaur Foundation and Victoria Police uses signs, education and publicity to improve road safety for children, pedestrians and cyclists. It featured in the Rosebud and Rye road safety campaigns last summer, with coloured banners and signs at

Man, 40, charged over burglary A CAPEL Sound man has been charged with aggravated burglary after a raid on a Carrum Downs house, 9.20am, Friday 8 December. The offender is alleged to have smashed a side window at the Shearwater Drive house and opened the front door. He is alleged to have searched the premises stealing

jewellery and other items. When the homeowner awoke and confronted him the man fled. The Carrum Down divisional van intercepted the man’s car in Lyrebird Drive and found the booty inside. A 40-year-old man was bailed to appear at Frankston Magistrates’ Court at a later date.

key tourist spots and main roads appealing to drivers and pedestrians to monitor their behaviour. “Slow Down, Kids Around” and “Hold my Hand” signs along Point Nepean Rd, Dromana, Rosebud and Rye, will preach the road safety message. Twenty-nine councils across four states are participating in the campaign. “With the peninsula being a tourist destination over summer, we are

determined to push these messages to ensure every child remains safe while walking or riding about our townships,” the mayor Cr Bryan Payne said. “We strongly encourage both locals and tourists to drive safely during the summer period.” The shire is giving away free wristbands and bumper stickers at the Rosebud foreshore camping office during the campaign.

You’ll love what we do Simply spend $ + in one transaction to go into the draw. More details in-store. On SALE Now. Sizes ..L to Drawn Sat rd Dec.