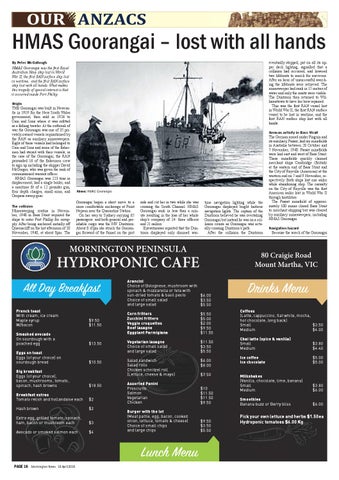 HMAS Goorangai – lost with all hands By Peter McCullough HMAS Goorangai was the first Royal Australian Navy ship lost in World War II, the first RAN surface ship lost in wartime, and the first RAN surface ship lost with all hands. What makes this tragedy of special interest is that it occurred inside Port Phillip. Origin THE Goorangai was built in Newcastle in 1919 for the New South Wales government, then sold in 1926 to Cam and Sons where it was refitted as a fishing trawler. At the outbreak of war the Goorangai was one of 35 privately-owned vessels requisitioned by the RAN as auxiliary minesweepers. Eight of these vessels had belonged to Cam and Sons and some of the fishermen had stayed with their vessels; in the case of the Goorangai, the RAN persuaded 16 of the fishermen crew to sign up including the skipper David McGregor, who was given the rank of commissioned warrant officer. HMAS Goorangai was 223 tons in displacement, had a single boiler, and a maritime fit of a 12 pounder gun, four depth charges, small arms, and Oropesa sweep gear. The collision Minesweeping routine in November, 1940 in Bass Strait required the ships to enter Port Phillip for resupply. After being anchored initially off Queenscliff on the hot afternoon of 20 November, 1940, at about 8pm. The

eventually stopped, put on all its upper deck lighting, signalled that a collision had occurred, and lowered two lifeboats to search for survivors. After an hour of unsuccessful searching the lifeboats were retrieved. The minesweeper had sunk in 15 metres of water and only the masts were visible. The Duntroon then returned to Williamstown to have her bow repaired. This was the first RAN vessel lost in World War II, the first RAN surface vessel to be lost in wartime, and the first RAN surface ship lost with all hands.

Goorangai began a short move to a more comfortable anchorage at Point Nepean near the Quarantine Station. On her way to Sydney carrying 65 passengers and both general and perishable cargo was the MV Duntroon. About 8.45pm she struck the Goorangai forward of the funnel on the port

side and cut her in two while she was crossing the South Channel. HMAS Goorangai sank in less than a minute resulting in the loss of her whole ship’s company of 24: three officers and 21 sailors. Eyewitnesses reported that the Duntroon displayed only dimmed war-

Avocado or smoked salmon each

Navigation hazard Because the wreck of the Goorangai

German activity in Bass Strait The German armed raider Pinguin and its auxiliary, Passat, laid six minefields in Australia between 28 October and 7 November, 1940. Passat minefields were laid east and west of Bass Strait. These minefields quickly claimed merchant ships Cambridge (British) at the eastern end of Bass Strait and the City of Rayville (American) at the western end on 7 and 9 November, respectively. Both ships lost one sailor while abandoning ship. The casualty on the City of Rayville was the first American sailor lost in World War II through hostilities. The Passat minefield of approximately 100 mines closed Bass Strait to merchant shipping but was cleared by auxiliary minesweepers, including HMAS Goorangai.

Pick your own lettuce and herbs $1.50ea Hydroponic tomatoes $6.00 Kg