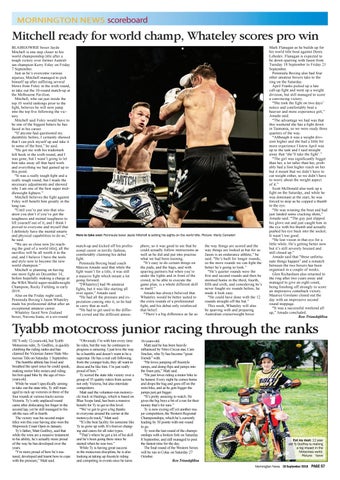 Mitchell ready for world champ, Whateley scores pro win BLAIRGOWRIE boxer Jayde Mitchell is one step closer to his world championship title after a tough victory over former Australian champion Kerry Foley on Friday 7 September. Just as he’s overcome various injuries, Mitchell managed to pick himself up after suffering several blows from Foley in the sixth round, to take out the 10-round match-up at the Melbourne Pavilion. Mitchell, who sat just inside the top 10 world rankings prior to the fight, believes he will now jump into the top five following the victory. Mitchell said Foley would have to be one of the biggest hitters he has faced in his career. “If anyone had questioned my durability before, I certainly showed that I can pick myself up and take it to some of the best,” he said. “He got me with his trademark left hook in the sixth round, and I was gone, but I wasn’t going to let him take away all that hard work and everything we had gained up to this point. “It was a really tough fight and a really tough round, but I made the necessary adjustments and showed why I am one of the best super middleweight fighters.” Mitchell believes the fight against Foley will benefit him greatly in the long run. “Until you’re put into that situation you don’t if you’ve got the toughness and mental toughness to lift yourself out of it, and I think I proved to everyone and myself that I definitely have the mental smarts and physical capabilities to do so,” he said. “We are so close now [to reaching the goal of a world title], all the sacrifice will be all worth it in the end, and I believe I have the tools and style now to become the new world champion.” Mitchell is planning on having one more fight on December 14, before hopefully making a charge at the WBA World super-middleweight Champion, Rocky Fielding in early 2019. Also on the Friday night card, Peninsula Boxing’s Jason Whateley made his professional debut after an exceptional amateur career. Whateley faced New Zealand boxer, Navosa Ioata, in a six-round

Here to take over: Peninsula boxer Jayde Mitchell is setting his sights on the world title. Picture: Marty Camaleri

match-up and kicked off his professional career in terrific fashion, comfortably claiming his debut fight. Peninsula Boxing head coach Marcos Amado said that while the fight wasn’t for a title, it was still a massive fight which meant a lot going forward. “[Whateley] had 96 amateur fights, but it was like starting all over again,” Amado said. “He had all the pressure and expectation coming into it, so he had to carry that as well. “He had to get used to the different crowd and the different atmos-

phere, so it was good to see that he could actually follow instructions as well as he did and put into practise what we had been training. “It’s easy to do certain things on the pads, and the bags, and with sparring partners but when you’re under the lights and in front of the crowd, to be able to execute the game plan, is a whole different skill in itself.” Amado has always believed that Whateley would be better suited to the extra rounds of a professional fight, and his debut only reinforced that belief. “There’s a big difference as far as

the way things are scored and the way things are looked at but for us Jason is an endurance athlete,” he said. “He’s built for longer rounds, so the more rounds we can fight the better he’s going to look.” “He’s quieter rounds were the first and second rounds and then he stormed home in the third, fourth, fifth and sixth, and considering he’s never fought six rounds before, he made it look easy. “He could have done with the 12 rounds straight off the bat.” This week, Whateley will also be sparring with and preparing Australian cruiserweight boxer

Mark Flanagan as he builds up for his world title bout against Denis Lebedev. Flanagan is expected to be down sparring with Jason from Tuesday 18 September to Friday 21 September. Peninsula Boxing also had four other amateur boxers take to the ring on the Saturday. April Franks picked up a late call-up fight and went up a weight division, but still managed to score a convincing victory. “She took the fight on two days’ notice and comfortably beat a heavier and more experience girl,” Amado said. “The advantage we had was that this weekend she has a fight down in Tasmania, so we were ready three quarters of the way. “Although it was a weight division higher and she had a little bit more experience I knew April was up to the task and I said straight away that ‘she’ll take the fight’.” “The girl was significantly bigger than her, a lot taller than her, probably had a foot higher reach on her but it meant that we didn’t have to cut weight either, so we didn’t have to worry about the weight aspect of it.” Scott McDonald also took up a fight on the Saturday, and while he was dominant at the start, he was forced to stop as he copped a thumb to the eye. “He was winning the bout and had just landed some cracking shots,” Amado said. “The guy just slipped his glove out and just caught him in the eye with his thumb and actually pushed his eye back into the socket. It wasn’t too good. “He lost vision in that eye for a little while. He’s getting better now but it’s still severely bruised and still closed up.” Amado said that “these unfortunate things happen” and a rematch between the two boxers has been organised in a couple of weeks. Glen Richardson also returned to the ring after two years away and managed to give an eight count, being finishing off strongly to score an impressive comeback victory. Maurice Girolami closed out the day with an impressive second round stoppage. “It was a successful weekend all up,” Amado concluded. Ben Triandafillou

Tyabb motocross junior racing through the ranks HE’S only 12-years-old, but Tyabb Motocross rider, Ty Godfrey, is quickly climbing the riding ranks and has claimed the Victorian Junior State Motocross Title on Saturday 1 September. The humble athlete has lived and breathed the sport since he could speak, making motor bike noises and riding his first quad bike by the age of twoyears-old. While he wasn’t specifically aiming to take out the state title, Ty still managed to rack up victories in three of the four rounds at various tracks across Victoria. Ty’s only unplaced round came after dislocating his finger in the second lap, yet he still managed to finish the race off in fourth. The victory was his second major titles win this year having also won the Shipwreck Coast Open in January. Ty’s father, Matt Godfrey, said that while the wins are a massive testament to his ability, he’s actually more proud of the way he has developed over the years. “I’m more proud of how he’s matured, developed and learnt how to cope with the pressure,” Matt said.

“Obviously I’m with him every time he rides, but the way he continues to progress is amazing. I just love the way he is humble and doesn’t want to be a superstar. He has a real cult following from the younger kids, they all want to dress and be like him. I’m just really proud of him.” Ty scored the state title victory over a group of 35 quality riders from across not only Victoria, but also interstate competitors. Matt said the volunteer-run motorcycle track in Hastings, which is based on Blue Scope land, has been a massive benefit for Ty to get to this level. “We’ve got to give a big thanks to everyone around the corner at the motorcycle track,” Matt said. “It’s the best facility for someone like Ty to grow up with. It’s forever changing and caters for all rider types. “That’s where he got a lot of his skill and he’s been going there since he started when he was two.” While Ty is having great success in the motocross discipline, he is also looking at taking up freestyle riding and competing in events once he turns

16-years-old. Matt said he has been heavily influenced by Nitro Circus star, Cam Sinclair, who Ty has become “great friends” with. “He loves jumping off freestyle ramps, and doing flips and jumps into the foam pits,” Matt said. “He just loves riding a motor bike to be honest. Every night he comes home and drops the bag and goes off on the mini bike, and as he gets bigger the jumps just get bigger. “It’s pretty amazing to watch. He gives the big boys a bit of a run for their money that’s for sure.” Ty is now eyeing off yet another major competition, the Western Regional Championships, which he’s currently leading by 50 points with one round to go. Ty won the last round of the championships with a broken fork on Saturday 8 September, and still managed to post the fastest time for the day. The final round of the Western Series will be run in Colac on Saturday 27 October. Ben Triandafillou