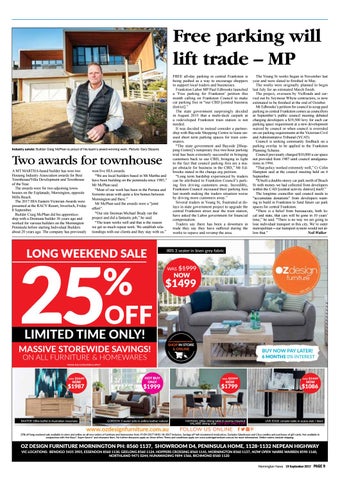 Free parking will lift trade ­– MP FREE all-day parking in central Frankston is being pushed as a way to encourage shoppers to support local traders and businesses. Frankston Labor MP Paul Edbrooke launched a ‘Free parking for Frankston’ petition this month calling on Frankston Council to make car parking free in “our CBD [central business district].” The state government surprisingly decided in August 2015 that a multi-deck carpark at a redeveloped Frankston train station is not needed. It was decided to instead consider a partnership with Bayside Shopping Centre to lease unused short term parking spaces for train commuters. “The state government and Bayside [Shopping Centre]’s temporary free two hour parking trial has been extremely successful in bringing customers back to our CBD, bringing to light to the fact that council parking fees are a major obstacle for business in the CBD,” Mr Edbrooke stated in the change.org petition. “Long term hardship experienced by traders can be attributed to Frankston Council’s parking fees driving customers away. Incredibly, Frankston Council increased their parking fees last month making the traders situation worse by driving more customers away.” Several traders in Young St, frustrated at delays in state government project to upgrade the central Frankston street near the train station, have asked the Labor government for financial compensation. Traders say there has been a downturn in trade they say they have suffered during the works to repave and revamp the area.

Two awards for townhouse A MT MARTHA-based builder has won two Housing Industry Association awards for Best Townhouse/Villa Development and Townhouse of the Year. The awards were for two adjoining townhouses on the Esplanade, Mornington, opposite Mills Beach. The 2017 HIA Eastern Victorian Awards were presented at the RACV Resort, Inverloch, Friday 8 September. Builder Craig McPhan did his apprenticeship with a Dromana builder 36 years ago and worked for various builders on the Mornington Peninsula before starting Individual Builders about 20 years ago. The company has previously

won five HIA awards. “We are local builders based in Mt Martha and have been building on the peninsula since 1985,” Mr McPhan said. “Most of our work has been in the Portsea and Sorrento areas with quite a few homes between Mornington and there.” Mr McPhan said the awards were a “joint effort”. “Our site foreman Michael Brady ran the project and did a fantastic job,” he said. “The team works well and that is the reason we get so much repeat work. We establish relationships with our clients and they stay with us.”

The Young St works began in November last year and were slated to finished in May. The works were originally planned to begin last July for an estimated March finish. The project, overseen by VicRoads and carried out by Seymour Whyte contractors, is now estimated to be finished at the end of October. Mr Edbrooke’s petition for council to scrap paid parking in central Frankston comes as councillors at September’s public council meeting debated charging developers a $19,500 levy for each car parking space requirement at a new development waived by council or when council is overruled on car parking requirements at the Victorian Civil and Administrative Tribunal (VCAT). Council is seeking community feedback on a parking overlay to be applied to the Frankston Planning Scheme. Council previously charged $10,000 a car space not provided from 1987 until council amalgamations in 1994. “That policy worked extremely well,” Cr Colin Hampton said at the council meeting held on 4 September. “It built a double-storey car park north of Beach St with money we had collected from developers within the CAD [central activity district] itself.” The longtime councillor said council needs to “accumulate donations” from developers wanting to build in Frankston to fund future car park spaces for central Frankston. “There is a belief from bureaucrats, both local and state, that cars will be gone in 10 years’ time,” he said. “There is no way we are going to lose individual transport in this city. We’re outer metropolitan – our transport system would not allow that.” Neil Walker

25% off long weekend sale available in-store and online on all new orders of furniture and homewares from 19-09-2017 till 02-10-2017 inclusive. Savings off full recommend retail prices. Excludes Glasshouse and Circa candles and purchases of gift cards. Not available in conjunction with Hot Buys*, Super Savers* and clearance lines. No further discounts apply on these offers. Terms and conditions apply see www.ozdesignfurniture.com.au for more information. Online orders exclude shipping.