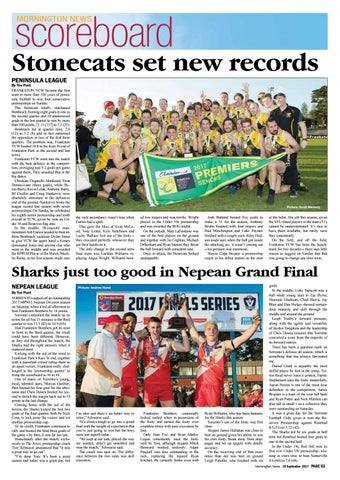 By Toe Punt FRANKSTON YCW became the first team in more than 100 years of peninsula football to win four consecutive premierships on Sunday. The Stonecats totally outclassed Bonbeach, booting eight goals to one in the second quarter and 10 unanswered goals in the last quarter to win by more than 100 points, 21.11 (137) to 5.5 (35). Bonbeach led at quarter time, 2.0 (12) to 1.2 (8) and in fact outscored the opposition in two of the first three quarters. The problem was, Frankston YCW booted 18.8 to the Kars St end of Frankston Park in the second and last terms. Frankston YCW went into the match with the best defence in the competition, averaging just 9.2 goals per game against them. They smashed that in the big dance. Christian Ongarello blanketed Trent Dennis-Lane (three goals), while Byron Barry, Kevin Lylak, Anthony Barry, BJ Credlin and Craig Nankervis were absolutely dominant in the defensive end of the ground. Nankervis broke the league record last season with seven premierships. On Sunday he celebrated his eighth senior premiership and tenth overall at YCW, given he won an Under 18 and Reserves flag also. In the middle, 38-year-old manmountain Ash Eames needed to beat inform Bonbeach ruckman Dylan Jones to give YCW the upper hand – Eames dominated Jones and anyone else who went in the middle and was awarded the RPPFM Player of the Match. Macklin Raine, in his first season, made sure

the ruck ascendancy wasn’t loss when Eames had a spell. This gave the likes of Scott McLeod, Tony Lester, Kyle Hutchison and Lachy Wallace first use of the footy – they executed perfectly whenever they got their hands on it. The only change to the second semi final team was Lachlan Williams replacing Angus Wright. Williams boot-

ed two majors and was terrific. Wright played in the Under 19s premiership and was awarded the BOG medal. On the outside, Matt LaFontaine was one of the best players on the ground and together with Jai Coghlan, Michael Debenham and Ryan Santon, they thrust the ball forward with consistent ease. Once in attack, the Stonecats looked unstoppable.

Josh Butland booted five goals to make it 51 for the season, Anthony Bruhn finished with four majors and Paul Minchington and Luke Paynter finished with a couple each. Riley Hodson made sure when the ball got inside the attacking arc, it wasn’t coming out – his pressure was enormous. Wayne Capp became a premiership coach in his debut season as the man

at the helm. His job this season, given the VFL-listed players in the team (11), cannot be underestimated. It’s nice to have them available, but rarely were they consistently. On the field, and off the field, Frankston YCW has been the benchmark for two decades – there was little reason to suggest on Sunday that that was going to change any time soon.

By Toe Punt SORRENTO capped off an outstanding 2017 MPNFL Nepean Division season on Saturday when it led all afternoon to beat Frankston Bombers by 14 points. Sorrento controlled the match on its terms for all but 15 minutes in the third quarter to win 13.5 (83) to 10.9 (69). Had Frankston Bombers got its nose in front in the third quarter, the result could have been different. However, as they did throughout the match, the Sharks had the right answers when it mattered most. Kicking with the aid of the wind to Frankston Park’s Kars St end, together with a parochial crowd riding them to an upset victory, Frankston really challenged in the ‘premiership quarter’ to bring the scoreboard to 56 to 49. One of many of Sorrento’s young, local, talented stars, Marcus Gardner, then booted his first goal for the afternoon and Chris Dawes booted his second to stretch the margin back out to 19 points at the last change. Coming home with the aid of the breeze, the Sharks kicked the first two goals of the final quarter, both by Nick Corp, to lock away the victory and yet another premiership cup. To its credit, Frankston continued to rally and booted the final three goals of the game – by then, it was far too late. Immediately after the match, exclusively to The News, premiership coach Troy Schwarze announced that “it was a great way to go out”. “I’m done Toey. It’s been a great season and today was a great day, but

I’m shot and there’s no better way to retire,” Schwarze said. “It’s always tough to go into a grand final with the weight of expectation that you’re just going to win but the boys were just superb today. “We kept at our task, played the way we wanted, didn’t get unsettled and won the match,” Schwarze said. The coach was spot on. The difference between the two sides was skill execution.

Frankston Bombers continually looked rushed when in possession of the footy and turned the footy over countless times with poor execution by foot. Only Sam Fox and Ryan MarksLogan consistently used the footy well by foot, although skipper Mitch Bosward worked tirelessly. Adam Pasquill was also outstanding in the ruck, replacing the injured Ryan Kitchen. He certainly broke even with

Ryan Williams, who has been fantastic for the Sharks this season. Sorrento’s use of the footy was first class. Skipper James Hallahan was close to best on ground given his ability to win his own footy, break away from stoppages and hit up targets with deadly accuracy. On the receiving end of that more times than not was best on ground Leigh Poholke, who finished with six

goals. In the middle, Luke Tapscott was a bull while young stars in Zac Byrns, Shannon Gladman, Chad Harris, Jay Blair and Dan Hickey showed tremendous maturity and skill through the middle and around the ground. Leigh Treeby’s forward pressure, along with the agility and versatility of Jayden Tompkins and the leadership of Chris Dawes ensured that Sorrento converted a score from the majority of its forward entries. There has been a question mark on Sorrento’s defence all season, which is something that has always fascinated me. Daniel Grant is arguably the most skilful player by foot in the comp, Tyrren Head never loses a contest, Danny Stephenson uses the footy masterfully, Aaron Paxton is one of the most dour defenders in the competition, James Brigden is a team of the year full back and Ryan Potter and Nick Marsten can play tall or small – as a collective they were outstanding on Saturday. It was a great day for the Sorrento Football Club, given it won the Reserves Premiership against Rosebud 8.3 (51) to 5.12 (42). The Sharks led by six goals at half time but Rosebud booted four goals to one in the second half. In the Under 19s, Red Hill won its first ever Under 19s premiership, winning in extra time to beat Somerville 9.6 (60) to 7.6 (48).