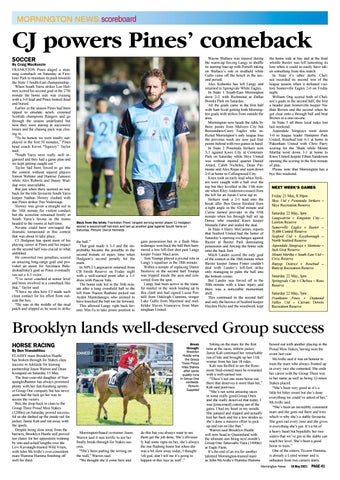 By Craig MacKenzie FRANKSTON Pines staged a stunning comeback on Saturday at Fawkner Park to maintain its push towards the State 3 South-East championship. When South Yarra striker Leo Holmes scored his second goal in the 27th minute the home side was cruising with a 3-0 lead and Pines looked dead and buried. Earlier in the season Pines had been tipped to emulate newly crowned Scottish champions Rangers and go through the season undefeated but now they were staring at successive losses and the chasing pack was closing in. “To be honest we were totally outplayed in the first 30 minutes,” Pines head coach Kevin “Squizzy” Taylor said. “South Yarra were really well organised and they had a game plan and we kept getting caught out.” Taylor had been forced to go into the contest without injured players Simon Webster and Hamraz Zanoozi while Alex Roberts and Danny Waddup were unavailable. But just when there seemed no way back for the title favourite South Yarra keeper Nathan Slowey clashed with star Pines striker Tito Vodowaqa. Slowey was given a straight red in the 34th minute for violent conduct but the scoreline remained firmly in South Yarra’s favour as the teams headed to the rooms at half-time. No-one could have envisaged the dramatic turnaround in this contest that was about to take place. CJ Hodgson has spent most of his playing career at Pines and his impact on the second half was crucial to what unfolded. He converted two penalties, scored an amazing long-range goal and provided an assist for Savenaca Baledrokadroka’s goal as Pines eventually ran out a 4-3 victor. “I’ve never coached at senior level and been involved in a comeback like that,” Taylor said. “I have no idea how CJ made such clean contact for his effort from outside the box. “He was in the middle of the mud patch and slipped as he went to strike

Back from the brink: Frankston Pines’ longest serving senior player CJ Hodgson scored a second-half hat-trick and set up another goal against South Yarra on Saturday. Picture: Darryl Kennedy

the ball.” That goal made it 3-3 and the improbable became the possible in the second minute of injury time when Hodgson’s second penalty hit the mark. In NPL2 Langwarrin returned from CB Smith Reserve on Friday night with a well-earned point after a 1-1 draw with Pascoe Vale. The home side led in the 36th minute after a long crossfield ball to the left from Naeem Rashimi picked out Ayden Mustedanagic who seemed to have knocked the ball too far forward. This allowed Langy right back Jeremy Min Fa to take prime position to

gain possession but in a flash Mustedanagic won back the ball then hammered a low left-foot shot past Langy keeper Fraser MacLaren. Tom Youngs played a pivotal role in Langy’s equaliser in the 58th minute. Within a minute of replacing Damir Stoilovic in the second half Youngs was tripped inside the area and converted from the spot. Langy had been active in the transfer market in the week leading up to this clash and had signed Lucas Portelli from Oakleigh Cannons, winger Luke Gallo from Mazenod and midfielder Slaven Vranesevic from Manningham United.

Wayne Wallace was injured during the warm-up forcing Langy to shuffle its starting line-up with Portelli taking on Wallace’s role in midfield while Gallo came off the bench in the second period. Alex Kubenko has left Langy and returned to Springvale White Eagles. In State 1 South-East Mornington drew 2-2 with Richmond at Dallas Brooks Park on Saturday. All the goals came in the first half with Sam Scott getting both Mornington goals with strikes from outside the area. Mornington now heads the table by three points from Malvern City but Boroondara-Carey Eagles who inflicted Mornington’s only league loss the previous week are now just four points behind with two games in hand. In State 2 Peninsula Strikers won 3-1 against Knox City at Centenary Park on Saturday while Skye United was without injured quartet Daniel Attard, Caleb Nicholes, Dean Piemonte and Alex Rojas and went down 2-0 at home to Collingwood City. Knox took an early lead when Strikers were caught with a ball over the top but they levelled in the 15th minute when Riley Anderton crossed from the left for an Aaran Currie tap in. Strikers took a 2-1 lead into the break after Ben Doree finished from a tight angle in the 42nd minute and Currie turned provider in the 65th minute when his through ball set up Doree who rounded Knox keeper Mustafa Zahir and sealed the deal. In State 4 Harry McCartney reports that Seaford United had the better of Saturday’s opening exchanges against Baxter at Baxter Park dominating possession and forcing the home side onto the back foot. Mitch Lander scored the only goal of the contest in the 18th minute when Baxter keeper James Foster couldn’t deal with Lander’s left-foot strike only managing to palm the ball into the bottom corner. But Lander was forced off in the 30th minute with a knee injury and there was a noticeable momentum shift. This continued in the second half and only the heroics of Seaford keeper Hayden Hicks and the woodwork kept

the home side at bay and at the final whistle Baxter was left lamenting its loss when it could so easily have taken something from this match. In State 4’s other derby Chelsea recorded its second win of the league season when it defeated visitors Somerville Eagles 2-0 on Friday night. William Ong scored both of Chelsea’s goals in the second half, the first a header past Somerville keeper Nathan Brown and the second when he got clear onto a through ball and beat Brown in a one-on-one. In State 5 all three local sides lost last weekend. Aspendale Stingrays went down 1-0 to league leader Hampton Park United, Rosebud lost 4-1 at home to Pakenham United with Chris Parry scoring for the ’Buds while Mount Martha went down 3-1 at home to Knox United despite Ethan Sanderson opening the scoring in the first minute of play. Please note that Mornington has a bye this weekend. NEXT WEEK’S GAMES Friday 21 May, 8.30pm: Skye Utd v Peninsula Strikers – Skye Recreation Reserve Saturday 22 May, 3pm: Langwarrin v Kingston City – Lawton Reserve Somerville Eagles v Baxter – Tyabb Central Reserve Seaford Utd v Keysborough – North Seaford Reserve Aspendale Stingrays v Mentone – Jack Grut Reserve Mount Martha v South East Utd – Civic Reserve Bunyip District v Rosebud – Bunyip Recreation Reserve Saturday 22 May, 5pm: Springvale City v Chelsea – Ross Reserve Saturday 22 May, 7pm: Frankston Pines v Diamond Valley Utd – Carrum Downs Recreation Reserve

By Ben Triandafillou FLASHY mare Brooklyn Hustle has broken through for Stakes class success in Adelaide for training partnership Jason Warren and Dean Krongold on Saturday 15 May. The four-year-old daughter of Starspangledbanner has always promised plenty with her fast-finishing sprints in Group One company but has never quite had the luck go her way to secure the victory. But, the drop back in class to the Group Three Proud Miss Stakes (1200m) on Saturday proved successful as she dashed up the inside rail for jockey Jamie Kah and ran away with the spoils. Despite being slow away from the barriers, Brooklyn Hustle still proved too classy for her opposition winning by one-and-a-half lengths over the Levi Kavanagh-trained Wild Vixen, with John McArdle’s ever-consistent mare Humma Humma finishing off well for third.

Mornington-based co-trainer Jason Warren said it was terrific to see her finally break-through for Stakes success. “She’s been putting the writing on the wall,” Warren said. “We thought she’d come here and

do this but you always want to see them get the job done. She’s obviously had some rapts on her, she’s always the one flashing home but when she was a bit slow away today, I thought ‘oh god, don’t tell me it’s going to happen in this race as well’.”

Sitting on the mare for the first time at the races, inform jockey Jamie Kah continued her remarkable run of late and brought up her 11th winner from her last 18 rides. Kah was thrilled to see the Rosemont Stud-owned mare be rewarded with a well-earned win. “There’s not one more horse out there that deserves it more than her,” Kah said post-race. “She’s run some amazing races in some really good Group Ones and she really deserved that today. I was [concerned] coming out of the gates. I had my heart in my mouth. She jumped and slipped and actually lost her back end for a few strides so she’s done a massive effort to pick up and run on like that.” Warren said Brooklyn Hustle will now head to Queensland with the ultimate aim being next month’s Group One Tattersalls Tiara (1400m) at Eagle Farm. It’s the end of an era for another talented Mornington-trained mare as John McArdle’s Humma Humma

bowed out with another placing in the Proud Miss Stakes, having won the event last year. McArdle said it was an honour to train the mare who always fronted up in every race she contested. She ends her career with the Group Three win to her name as well as being 12-times Stakes placed. “She’s been very good so it’s a little bit bitter sweet but she’s done everything we could’ve asked of her,” McArdle said. “She’s been an incredibly consistent mare and she goes out there and tries which is why she’s a stable favourite. She goes out every time and she gives it everything she’s got. It’s a bit of a heavy heart but hopefully her two sisters that we’ve got in the stable can reach her level. She’s been a good horse to train.” One of the sisters, Tycoon Humma, is already a Listed winner and is unbeaten from two careers starts.