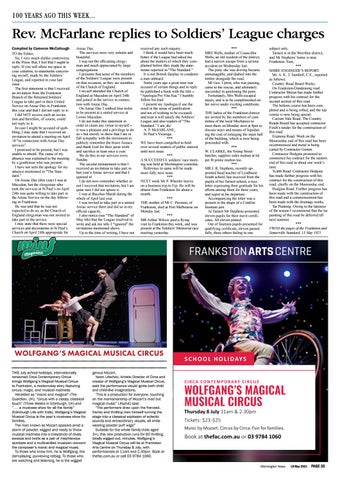 Rev. McFarlane replies to Soldiers’ League charges Compiled by Cameron McCullough TO the Editor, Sir, I very much dislike controversy in the Press. But, I feel that I ought to reply. If you will allow me space in your columns, to statements concerning myself, made by the Soldiers’ League, and reported in your last issue. The first statement is that I received an invitation from the Frankston Branch of the Returned Soldiers’ League to take part in their United Service on Anzac Day in Frankston this year and that I did not reply to it. I did NOT receive such an invitation and therefore, of course, could not reply to it. In case I might be accused of quibbling, I may state that I received an invitation to attend a meeting on April 18 “in connection with Anzac Day services”. I promised to be present, but I was unable to attend. The cause of my absence was explained to the meeting by a gentleman who was present. I have not seen the apology for my absence mentioned in “The Standard.” On Anzac Day (this year) I was at Macedon, but the clergyman who took the services at St Paul’s on April 24th was quite willing to take part in the Anzac Service on the day following in Frankston. He was told that he was not expected to do so, as the Church of England clergyman was not invited to take part in the service. I may state that there were special services and decorations in St Paul’s Church on April 24th appropriate for

Anzac Day. The services were very solemn and beautiful. I was not the officiating clergyman and much appreciated by large congregations. I presume that some of the members of the Soldiers’ League were present on that occasion, as they are members of the Church of England. I myself attended the Church of England at Macedon on April 24th and joined in the service in connection with Anzac Day. On Anzac Day I walked four miles to be present at a united service at Lower Macedon. I do not make this statement in order to claim any virtue to myself – it was a pleasure and a privilege to do so – but merely to show that I am in full sympathy with the movement to publicly remember the brave Anzacs and thank God for their great work and sacrifice at least once a year. We do this in our services every Sunday. The second mistatement is that I received an invitation to take part in last year’s Anzac service and that I ignored it! I do not now remember whether or not I received that invitation, but I am quite sure I did not ignore it. I was at Bacchus Marsh during the whole of April last year. I was invited to take part in a united Anzac service there and did so in my official capacity. I also notice (see “The Standard” of May 6th) that the League resolved to write and ask me why I “ignored” the invitations mentioned above. Up to the time of writing, I have not

received any such enquiry. I think it would have been much better if the League had asked me about the matters of which they complained before they made the statements reported in “The Standard.” It is not British fairplay to condemn a man unheard. Some years ago a great man was accused of certain things and in reply he published a book with the title – “Apologia Pro Vita Sua.” I humbly follow his lead. I present my Apologia (I use the word in the sense of justification and not of wishing to be excused) and trust it will satisfy the Soldiers’ League and also readers of “The Standard.” I am, &c A. P. McFARLANE, St Paul’s Vicarage. *** WE have been compelled to hold over several matters of public interest until next issue. *** A SUCCESSFUL soldiers’ race meeting was held at Mornington yesterday. Reference to same will be made more fully next issue. *** NEXT week Mr P. Wheeler leaves on a business trip to Fiji. He will be absent from Frankston for about a month. *** THE mother of Mr C. Paxman, of Frankston, died at Port Melbourne on Monday last. *** MR Arthur Wilcox paid a flying visit to Frankston this week, and was present at the Soldiers’ Memorial race meeting yesterday.

*** MRS Wells, mother of Councillor Wells, an old resident of the district, had a narrow escape from a serious accident on Wednesday last. The pony she was driving became unmanagable, and dashed into the timber alongside the road. Mr Geo. Upton, who was passing, came to the rescue, and ultimately succeeded in quietening the pony. Fortunately, Mrs Wells escaped injury, and is to be complimented on her nerve under exciting conditions. *** THE ladies of the Frankston district are invited by the members of committee of the local Mechanics to meet them on Monday next at 8pm to discuss ways and means of liquidating the cost of enlarging the main hall of the building, which is now being proceeded with. *** W. CLARKE, the Young Street butcher, supplies sides mutton at 6d per lb prime mutton too. *** MR J. R. Stephens, recently appointed head teacher of Lyndhurst South school, has received from the pupils of his Tarneit school, a nice letter expressing their gratitude for his efforts among them for three years, and regret at his departure. Accompanying the letter was a present in the shape of a Conklin fountain pen. At Tarneit Mr Stephens presented eleven pupils for their merit certificates. All eleven passed. Out of fourteen pupils presented for qualifying certificate, eleven passed fully, three others failing in one

subject only. Tarneit is in the Werribee district, and Mr Stephens’ home is near Frankston. East, *** SHIRE ENGINEER’S REPORT. Mr. A. K. T. Sambell, C.E., reported as follows: Country Road Board Works. On Frankston-Dandenong road Contractor Moran has made further progress with his contract for the second section of this road. The bottom course has been completed and is being rolled, and the top course is now being spread. Carrum Vale Road. The Country Roads Board has accepted contractor Finch’s tender for the construction of this road. Eramosa Road. Work on the Moorooduc end of this road has been recommenced and metal is being carted by Contractor Gomm. Contractor Hodgins promised to commence his contract for the eastern end of this road in about one week’s time. Tyabb Road. Contractor Hodgins has made further progress with his contract for the construction of this road, chiefly on the Moorooduc end. Hodgins Road. Further progress has been made with the construction of this road and a commencement has been made with the drainage works. Tar Painting. Owing to the lateness of the season I recommend that the tar painting of this road be deferred till next summer. *** FROM the pages of the Frankston and Somerville Standard, 13 May 1921

WOLFGANG’S MAGICAL MUSICAL CIRCUS THIS July school holidays, internationally renowned Circa Contemporary Circus brings Wolfgang’s Magical Musical Circus to Frankston, a modern-day story featuring circus, magic, and musical madness. Heralded as “manic and magical” (The Guardian, UK), “circus with a classy, classical touch” (Three Weeks in Edinburgh, UK) and “. . . a must-see show for all the family” (Edinburgh Life with Kids), Wolfgang’s Magical Musical Circus is the year’s must-see show for families. The man known as Mozart appears amid a storm of powder, wigged and ready to throw musical madness into a crescendo of dives, swoops and twirls as a pair of mischievous acrobats and a multi-skilled musician reinvent the composer’s manic and magical music. To those who know him, he is Wolfgang, the dart-playing, pun-loving ratbag. To those who are watching and listening, he is the wigged

genius Mozart. Yaron Lifschitz, Artistic Director of Circa and creator of Wolfgang’s Magical Musical Circus, said the performance would ignite both child and child-like imaginations. ‘This is a production for everyone, touching on the marksmanship of Mozart’s mad but magical music” Lifschitz said. “The performers draw upon the frenzied, frantic and thrilling man himself turning the stage into a classical explosion of eclectic sounds and extraordinary visuals, all while wearing powder puff wigs!” Suitable for the whole family (kids aged 3+), this new production runs for 60 thrilling, totally wigged out, minutes. Wolfgang’s Magical Musical Circus will be at Frankston Arts Centre on Thursday 8 July, with performances at 11am and 2.30pm. Book at thefac.com.au or call 03 9784 1060. Mornington News