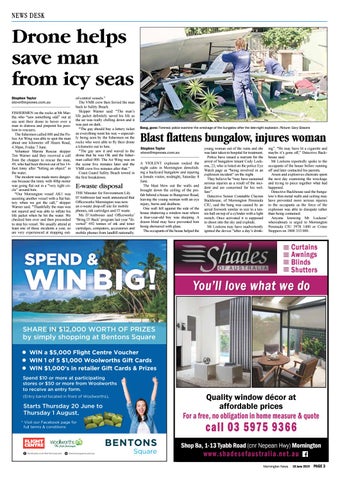 Drone helps save man from icy seas Stephen Taylor steve@mpnews.com.au FISHERMEN on the rocks at Mt Martha who “saw something odd” out at sea sent their drone to hover over a man in distress and pinpoint his position to rescuers. The fishermen called 000 and the Police Air Wing was able to spot the man about one kilometre off Hearn Road, 4.30pm, Friday 7 June. Volunteer Marine Rescue skipper Tim Warner said they received a call from the chopper to rescue the man, 49, who had been thrown out of his 14foot tinny after “hitting an object” in the water. The incident was made more dangerous because the tinny with 40hp motor was going flat out in a “very tight circle” around him. “Our Mornington vessel AK1 was assisting another vessel with a flat battery when we got the call,” skipper Warner said. “Thankfully the man was not injured and was able to inflate his life jacket when he hit the water. We checked him over and then proceeded to stop his vessel. We usually attend at least one of these incidents a year, so are very experienced at stopping out-

of-control vessels.” The VMR crew then ferried the man back to Safety Beach. Skipper Warner said: “The man’s life jacket definitely saved his life as the air was really chilling down and it was just on dark. “The guy should buy a lottery ticket as everything went his way – especially being seen by the fishermen on the rocks who were able to fly their drone a kilometre out to him. “The guy saw it and waved to the drone that he was OK and the fisherman called 000. The Air Wing was on the scene five minutes later and the VMR crew five minutes after that.” Coast Guard Safety Beach towed in the first breakdown.

Blast flattens bungalow, injures woman Stephen Taylor steve@mpnews.com.au A VIOLENT explosion rocked the night calm in Mornington demolishing a backyard bungalow and injuring a female visitor, midnight, Saturday 8 June. The blast blew out the walls and brought down the ceiling of the prefab behind a house in Bungower Road, leaving the young woman with an eye injury, burns and deafness. One wall fell against the side of the house shattering a window near where a four-year-old boy was sleeping. A drawn blind may have prevented him being showered with glass. The occupants of the house helped the

young woman out of the ruins and she was later taken to hospital for treatment. Police have issued a warrant for the arrest of bungalow tenant Cody Lockens, 23, who is listed on the police Eye Watch page as “being involved in an explosion incident” on the night. They believe he “may have sustained serious injuries as a result of the incident and are concerned for his welfare”. Detective Senior Constable Clayton Backhouse, of Mornington Peninsula CIU, said the bang was caused by an aerial firework similar in size to a tennis ball on top of a cylinder with a light switch. Once activated it is supposed to shoot into the sky and explode. Mr Lockens may have inadvertently ignited the device “after a day’s drink-

ing”. “He may have lit a cigarette and maybe it’s gone off,” Detective Backhouse said. Mr Lockens reportedly spoke to the occupants of the house before running off and later contacted his parents. Arson and explosives chemists spent the next day examining the wreckage and trying to piece together what had happened. Detective Backhouse said the bungalow’s thin metal walls and ceiling may have prevented more serious injuries to the occupants as the force of the explosion was able to dissipate rather than being contained. Anyone knowing Mr Lockens’ whereabouts is urged to Mornington Peninsula CIU 5978 1400 or Crime Stoppers on 1800 333 000.