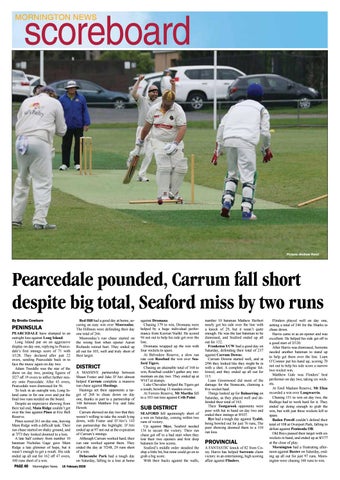 PEARCEDALE have slumped to an outright loss against Long Island. Long Island put on an aggressive display on day one, replying to Pearcedale’s first innings score of 71 with 1/128. They declared after just 22 overs, sending Pearcedale back in to face the music again on day two. Adam Tweddle was the star of the show on day two, posting figures of 5/27 off 19 overs to inflict further misery onto Pearcedale. After 45 overs, Pearcedale were dismissed for 56. To lock in an outright win, Long Island came in for one over and put the final two runs needed on the board. Despite an impressive showing from their tail end, Main Ridge couldn’t get over the line against Pines at Eric Bell Reserve. Pines scored 261 on day one, leaving Main Ridge with a difficult task. Their run chase started on shaky ground, and at 7/73 they looked doomed to a loss. A late half century from number 10 batsman Nicholas Gage gave Main Ridge a late glimmer of hope, but it wasn’t enough to get a result. His side ended up all out for 162 off 47 overs, 100 runs short of a win.

Red Hill had a good day at home, securing an easy win over Moorooduc. The Hillmen were defending their day one total of 266. Moorooduc’s run chase started on the wrong foot when opener Aaron Richards retired hurt. They ended up all out for 105, well and truly short of their target.

A MASSIVE partnership between Shaun Foster and Jake D’Atri almost helped Carrum complete a massive run chase against Hastings. Hastings set their opponents a target of 268 to chase down on day one, thanks in part to a partnership of 148 between Matthew Foy and Jake Hewitt. Carrum showed on day two that they weren’t willing to take the result lying down, with Foster and D’Atri’s 143 run partnership the highlight. D’Atri ended up at 97 not out at the expiration of Carrum’s innings. Although Carrum worked hard, their run rate worked against them. They ended the day at 7/248, 29 runs short of a win. Delacombe Park had a tough day on Saturday, falling to a loss at home

against Dromana. Chasing 179 to win, Dromana were helped by a huge individual performance from Kierran Voelkl. He scored 94 not out to help his side get over the line. Dromana wrapped up the win with four wickets to spare. At Belvedere Reserve, a slow run rate cost Rosebud the win over Seaford Tigers. Chasing an attainable total of 168 to win, Rosebud couldn’t gather any momentum on day two. They ended up at 9/147 at stumps. Luke Chevalier helped the Tigers get a result, bowling 13 maiden overs. At Ferrero Reserve, Mt Martha fell to a 103 run loss against Crib Point.

SEAFORD fell agonisingly short of a win on Saturday, coming within two runs of victory. Up against Skye, Seaford needed 154 to secure the victory. Their run chase got off to a bad start when they lost their two openers and first drop batsmen for low scores. Seaford’s middle order steadied the ship a little bit, but none could go on to grab a big score. With their backs against the walls,

number 10 batsman Mathew Herbert nearly got his side over the line with a knock of 29, but it wasn’t quite enough. He was the last batsman to be dismissed, and Seaford ended up all out for 152. Frankston YCW had a good day on Saturday, defending their total of 237 against Carrum Downs. Carrum Downs started well, and at 2/96 they looked like they might be in with a shot. A complete collapse followed, and they ended up all out for 115. Liam Greenwood did most of the damage for the Stonecats, claiming a five wicket haul. Things looked up for Balnarring on Saturday, as they played well and defended their total of 163. Their Tootgarook opponents were poor with bat in hand on day two and ended their innings at 9/107. Rye had a tough day against Tyabb, being bowled out for just 76 runs, The poor showing doomed them to a 110 run loss.

A FANTASTIC knock of 82 from Corey Harris has helped Sorrento claim victory in an entertaining, high scoring affair against Flinders.

Flinders played well on day one, setting a total of 246 for the Sharks to chase down. Harris came in as an opener and was excellent. He helped his side get off to a good start of 2/120. After Harris was dismissed, Sorrento needed another batsman to stand up to help get them over the line. Liam O’Connor put his hand up, scoring 70 not out to help his side score a narrow two wicket win. Matthew Gale was Flinders’ best performer on day two, taking six wickets. At Emil Madsen Reserve, Mt Eliza recorded a win over Langwarrin. Chasing 151 to win on day two, the Redlegs had to work hard for it. They ended up doing enough to grab the win, but with just three wickets left to spare. Baden Powell couldn’t defend their total of 108 at Overport Park, falling to defeat against Peninsula OB. Old Boys passed their target with six wickets in hand, and ended up at 8/177 at the close of play. Mornington had a frustrating afternoon against Baxter on Saturday, ending up all out for just 97 runs. Mornington were chasing 160 runs to win.