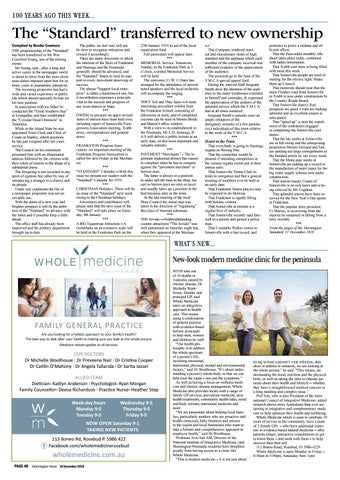 The “Standard” transferred to new ownership Compiled by Brodie Cowburn THE proprietorship of the “Standard” has been transferred to Mr Wm. Crawford Young, son of the retiring owner. Mr Young, senr., after a long and active career in the newspaper world is about to retire from the more strenuous duties imposed upon him for so many years in journalistic enterprise. The incoming proprietor has had a wide and varied experience in public life which should specially fit him for his new position. In association with his father he conducted the “Great Southern Star” at Leongatha, and later established the “Circular Head Chronicle” in Tasmania. While in the Island State he was appointed Town Clerk and Clerk of Courts at Stanley, which positions he has just resigned after ten years service. The Council on his retirement presented him with an illuminated address followed by the citizens with their token of esteem in the shape of a substantial purse. The foregoing is not recorded in any spirit of egotism but rather by way of introducing a stranger to a district and its people. Under war conditions the life of a newspaper proprietor was not an enviable one. With the dawn of a new year and brighter prospect it will be the ambition of the “Standard” to advance with the times and if possible keep a little ahead. The office staff has already been improved and the printery department brought tip to date.

The public we feel sure will not be slow to recognise enterprise and reward it accordingly. There are many directions in which the interests of the Shire of Frankston and Hastings and the Peninsula generally should be advanced, and the “Standard” hopes to lend its support to every movement deserving of success. The phrase “Support local enterprise” is rather a hackeneyed one, but it nevertheless expresses a principle vital to the success and progress of any town district or State. *** OWING to pressure on space several items of interest have been held over, including report of Somerville Fruitgrowers Association meeting, Tyabb news, correspondence and general news. *** FRANKSTON Progress Association. An important meeting of the Frankston Progress Association is called for next Friday in the Mechanics. *** “STANDARD” Calendar.—With this issue we present our readers with the “Standard” Calendar for 1919. *** CHRISTMAS Holidays. There will be no issue of the “Standard” next week owing to the Christmas holidays. Advertisers and contributors will please note that the next issue of the “Standard” will take place on Saturday, 4th January. *** A BIG Equestrian Attraction – A Gymkhana on an extensive scale will be held in the Frankston Park on the

27th January 1919 in aid of the local repatriation fund. Full particulars will appear later. *** MEMORIAL Service. Tomorrow, Sunday, in the Frankston Park at 3 o’clock, a united Memorial Service will be held. The convenor, Cr W. J. Oates has arranged for the attendance of several noted speakers and the local orchestra will accompany the singing. *** THEY Toil and They Spin.—A most interesting sericulture exhibit from the Frankston School, consisting of silkworms at work, and of completed cocoons can be seen in Messrs Brody and Mason’s office window. With a view to its establishment in the Peninsula, Mr J. D. Jennings, B A S will deliver a public lecture at an early date, on this most important and valuable industry. *** PAVEMENT “Merchants” – The legitimate tradesman always has reason to complain when he has to compete against the “pavement merchant” or barrow-man. The latter is always in a position to under sell the man in the shop; his cart or barrow pays no rates or taxes and usually takes up a position in the best business sites in the town. At the last meeting of the local Shire Council the initial step was taken in the direction of “regulating” this class of itinerant salesman. *** THE Jovials.—Nothwithstanding counter attractions “The Jovials” was well patronised on Saturday night last, when they appeared at the Mechan-

ics’. This Company rendered musical and elocutionary items of high standard and the applause which each member of the company received was sufficient evidence of the appreciation of the audience. The proceeds go to the fund of the Y.M.C.A special appeal fund. During the interval Staff Sergeant Smith drew the attention of the audience to the many kindnesses extended to himself and comrades, & expressed the appreciation of the soldiers of the splendid service which the Y M C A had at all times rendered. Sergeant Smith’s remarks were an ample refutation of the derogatory remarks of a few pariotic (sic) individuals of this town relative to the work of the Y M C A *** Heard in the Train. That everybody is going to Hastings regatta on Boxing Day. That the committee would be pleased if intending competitors in the various regatta events put in their entries early. That Somerville Tennis Club intends to reorganise and that a general meeting of members is to be held at an early date. That Frankston Tennis players may be expected to do likewise. That Frankston is rapidly filling with holiday visitors. That Somerville at present is a regular hive of industry. That Somerville recently said farewell to a parson and gained a police man. That Constable Walker comes to Somerville with a fine record, and

promises to prove a zealous and efficient officer. That the Pearcedale monthly rifle shoot takes place today, combined with ladies nomination. That Tyabb cool store is being filled with meat this week. That Somerville people are tired of waiting for the electric light. Shake them up Council. That motorists should note that the main Flinders road from Somerville to Tyabb is now under construction by the Country Roads Board. That Somerville district fruit prospects are good. Crops are looking splendid and an excellent season is anticipated. That “speed up” is now the watchword of the contractors engaged in completing the Somerville cool stores. That the tile works at Somerville are in full swing and the enterprising proprietors Messrs Gerrand and Son, are sending out large consignments of the finished article by rail every week. That the Mona pipe works at Somerville are putting up a record in the manufacture of water pipes for the big water supply scheme now under construction. That station master Coates of Somerville is on sick leave and is being relieved by Mr Crighton. That splendid entries have been received for the New Year’s Day sports at Frankston. That the popular shire president, Cr Murray, is recovering from the injuries he sustained in falling from a lorry recently. *** From the pages of the Mornington Standard, 21 December 1918

FAMILY GENERAL PRACTICE Are you looking for a holistic approach to your family’s health? The best way to look after your health is making sure you look at the whole picture. Medicare rebate applies to all services.

WITH nine out of 10 deaths in Australia caused by chronic disease, Dr Michelle Woolhouse, founder and principal GP, said Whole Medicine takes an integrative approach to health care. This means using a combination of general practice with evidence-based holistic principals to help men, women and children be well. “Our health philosophy is to address the whole spectrum of a person’s life, including emotional, nutritional, physical, mental and environmental factors,” said Dr Woolhouse. “It’s about understanding a person’s whole-body so that we can help treat the cause – not just the symptoms.” As well as having a focus on wellness medicine and chronic disease management, Whole Medicine also provides locals with a range of family GP services, prevention medicine, skin health treatments, community health talks, mind and body retreats, nutritional medicine and more. “We are passionate about helping local families, particularly mothers who are proactive and health conscious, baby boomers and retirees to the region and local businesses who want to take a holistic and comprehensive approach to employee health,” said Dr Woolhouse. Professor Avni Sali AM, Director of the National Institute of Integrative Medicine, said Mornington Peninsula residents have benefited greatly from having access to a clinic like Whole Medicine. “This is modern medicine – it is not just about

trying to treat a person’s viral infection, skin ulcer or asthma in isolation, we are looking at the whole person,” he said. “This means, understanding the mind, nutrition and the physical body, as well as taking the time to educate patients about their health and lifestyle – whether they have a straightforward medical concern or a long standing and complex issue.” Prof Sali, who is also President of the International Council of Integrative Medicine, added research shows more Australians than ever are turning to integrative and complementary medicine to help optimise their health and wellbeing. Whole Medicine which is soon to celebrate 10 years of service to the community, have a team of 5 female GPs – who have additional expertise in evidence-based natural medicine – offer patients longer, interactive consultations to get to know them – and work with them – to help uncover their best self. 113 Boneo Road, Rosebud. 03 5986-4229 Whole Medicine is open Monday to Friday – 8:30am to 5:00pm, Saturaday 9am -1pm