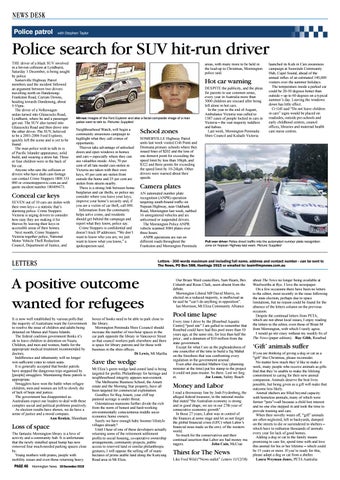 Police search for SUV hit-run driver THE driver of a black SUV involved in a hit-run collision at Lyndhurst, Saturday 1 December, is being sought by police. Somerville Highway Patrol members said the incident followed an argument between two drivers travelling north on DandenongFrankston Road, Carrum Downs, heading towards Dandenong, about 5:55pm. The driver of a Volkswagen sedan turned into Glasscocks Road, Lyndhurst, where he and a passenger got out. The SUV also turned into Glasscocks Road and then drove into the other driver. The SUV, believed to be a 2001-2006 Ford Explorer, quickly left the scene and is yet to be found. The man police wish to talk to is of Pacific Islander appearance, solid build, and wearing a straw hat. Three or four children were in the back of his car. Anyone who saw the collision or drivers who have dash cam footage can contact Crime Stoppers 1800 333 000 or crimestoppersvic.com.au and quote incident number 180409473.

Conceal car keys SEVEN out of 10 cars are stolen with their own keys – a statistic that’s alarming police. Crime Stoppers Victoria is urging drivers to consider how easy they are making it for thieves by leaving their keys in accessible areas of their homes. Next month, Crime Stoppers Victoria together police, National Motor Vehicle Theft Reduction Council, Department of Justice, and

areas, with many more to be held in the lead-up to Christmas, Mornington police said.

Hit-run: Images of the Ford Explorer and also a facial composite image of a man police want to talk to. Pictures: Supplied

Neighbourhood Watch, will begin a community awareness campaign to highlight what they call crimes of opportunity. Thieves take advantage of unlocked doors and open windows in homes and cars – especially where they can see valuables inside. Also, 70 per cent of all late model cars stolen in Victoria are taken with their own keys, 45 per cent are stolen from outside the home and 25 per cent are stolen from streets nearby. There is a strong link between home burglaries and car thefts, so police say consider where you leave your keys, improve your home’s security and, if you are a victim of car theft, call 000. Information from the community helps solve crime, and residents should get behind the campaign and report what they know, police say. Crime Stoppers is confidential and doesn’t track IP addresses. “We don’t want to know who you are; we just want to know what you know,” a spokesperson said.

Loss of space The fantastic Mornington library is a hive of activity and a community hub. It is unfortunate that the newly installed speed hump has now removed four much-needed parking spaces close by. Young mothers with prams, people with mobility issues and even those returning heavy

A positive outcome wanted for refugees It is now well established by various polls that the majority of Australians want the Government to resolve the issue of children and adults being detained on Manus and Nauru Islands. The federal coalition government thinks it’s ok to leave children in detention on Nauru. Children, and men and women, battle for the appropriate medical treatment recommended by doctors. Indifference and inhumanity will no longer win sufficient votes to retain seats. It is generally accepted that border patrols have stopped the dangerous trips organised by [people] smugglers. Maintaining those patrols is appropriate. Smugglers have won the battle when refugee children, men and women are left to slowly die of lack of hope and justice. The government has disappointed us. Australians expect our leaders to deal with these complex social and political problems positively. As election results have shown, we do have a sense of justice and a moral compass. Ann Renkin, Shoreham

DESPITE the publicity, and the pleas for parents to use common sense, every year in Australia more than 5000 children are rescued after being left alone in hot cars. In the year to the end of August, Ambulance Victoria was called to 1587 cases of people locked in cars in Victoria – the vast majority toddlers and babies. Last week, Mornington Peninsula Shire Council and Kidsafe Victoria

launched its Kids in Cars awareness campaign at Seawinds Community Hub, Capel Sound, ahead of the annual influx of an estimated 140,000 visitors over the summer holidays. The temperature inside a parked car could be 20-30 degrees hotter than outside – up to 60 degrees on a typical summer’s day. Leaving the windows down has little effect. Cr Gill said “Do not leave children in cars” signs would be placed on roadsides, outside pre-schools and early childhood centres, council offices, libraries and maternal health care nurse centres.

boxes of books need to be able to park close to the library. Mornington Peninsula Shire Ccouncil should increase the number of two-hour spaces in the car park opposite the library in Vancouver Street so that council workers park elsewhere and there is space for library patrons and for those with business in the shire offices. Di Lewis, Mt Martha

Save the wedge Mt Eliza’s green wedge land-zoned land is being targeted for profits. Philanthropy for heritage and neighbourhood integrity appears non-existent. The Melbourne Business School, the Ansett estate and the Morning Star property, have all been targeted for commercial exploitation. Goodbye Sir Reg Ansett, your cliff top pastoral acreage is under threat. Ostentatious mansions further divide the rich from the norm of honest and hard-working environmentally conscientious middle socio economic home owners. Surely we have enough baby boomer lifestyle villages already? Until I hear of one of these developers actually returning some of the retirement settlement profits to social housing, co-operative ownership arrangements, community projects, public access to reserved land or similar philanthropic gestures, I will oppose the selling off of many hectares of prime arable land along the Kunyung Road area in Mt Eliza.

Our Briars Ward councillors, Sam Hearn, Bev. Columb and Rosie Clark, seem absent from the debate. Mornington Liberal MP David Morris, reelected on a reduced majority, is ineffectual as he said he “can’t do anything in opposition”. Ian Morrison, Mt Eliza Community Alliance

Pool time lapse Every time I drive by the [Rosebud Aquatic Centre] “pool site” I am galled to remember that Rosebud could have had this pool more than 10 years ago, at the same site, for less than half the price , and a donation of $10 million from the state government. Except for what I see as the pigheadedness of one councillor of the time to build a Taj Mahal on the foreshore that was confronting every regulation in the government arsenal. Even after discarded Mathew Guy (planning minister at the time) put his stamp to the project it could not pass muster. So there. Lest we forg et. Joe Lenzo, Safety Beach

Money and Labor I read a throwaway line by Josh Frydenberg, the alleged federal treasurer, in the national media that stated “the Australian economy is strong and in good shape, we are in our 27th year of consecutive economic growth”. In those 27 years, Labor was in control of the finances at some stage and let us not forget the global financial crisis (GFC) when Labor’s financial nous made us the envy of the western world. So much for the conservatives and their continual assertion that Labor are bad money ma nagers. John Cain, McCrae

about The News no longer being available at Woolworths at Rye. I love the newspaper. On a few occasions there have been no letters to the editor, most recently in the issue following the state election, perhaps due to space limitations, but no reason could be found for the absence of the letters column on the previous occasion. Despite the continual letters from PETA, which are not about local issues, I enjoy reading the letters to the editor, even those of Brian M from Mornington, with which I rarely agree. I would go stir crazy without my weekly fix of The News (paper edition). Ray Gibb, Rosebud

‘Gift’ animals suffer If you are thinking of giving a dog or cat as a “gift” this Christmas, please reconsider. No matter how much they’d like to make it work, many people who receive animals as gifts find that they’re unable to make the lifelong commitment to caring for their new animal companion. Animals deserve the best lives possible, but being given as a gift will make that outcome less likely. Animal shelters are filled beyond capacity with homeless animals, many of which were former “pets”—all because a child lost interest and no one else stepped in and took the time to provide training and care. When their novelty wears off, “gift” animals are often neglected, left in backyards, dumped on the streets to die or surrendered to shelters – which have to euthanise thousands of animals every year for lack of good homes. Adding a dog or cat to the family means promising to care for, spend time with and love this animal for his or her lifetime – which could be 15 years or more. If you’re ready for this, please adopt a dog or cat from a shelter. Laura Weyman-Jones, PETA Australia