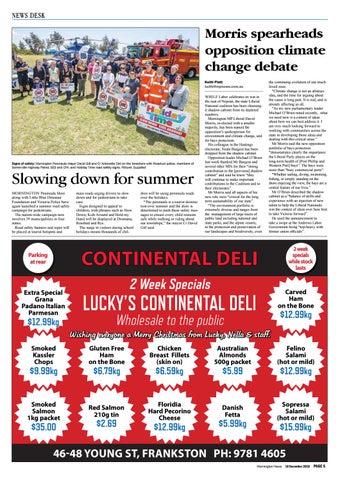 Slowing down for summer MORNINGTON Peninsula Shire along with Little Blue Dinosaur Foundation and Victoria Police have again launched a summer road safety campaign for pedestrians. The nation-wide campaign now involves 39 municipalities in four states. Road safety banners and signs will be placed at tourist hotspots and

main roads urging drivers to slow down and for pedestrians to take care. Signs designed to appeal to children, with phrases such as Slow Down, Kids Around and Hold my Hand will be displayed at Dromana, Rosebud and Rye. The surge in visitors during school holidays means thousands of chil-

dren will be using peninsula roads over the holidays. “The peninsula is a tourist destination over summer and the shire is determined to push these safety messages to ensure every child remains safe while walking or riding about our townships,” the mayor Cr David Gill said.

WHILE Labor celebrates its win in the seat of Nepean, the state Liberal National coalition has been choosing it shadow cabinet from its depleted numbers. Mornington MP Liberal David Morris, re-elected with a smaller majority, has been named the opposition’s spokesperson for environment and climate change, and for bays protection. His colleague in the Hastings electorate, Neale Burgess has been dropped from the shadow cabinet. Opposition leader Michael O’Brien last week thanked Mr Burgess and several other MPs for their “strong contribution to the [previous] shadow cabinet” and said he knew “they will continue to make important contributions to the Coalition and to their electorates”. Mr Morris said all aspects of his new role were “critical for the long term sustainability of our state”. “The environment portfolio is extremely diverse and ranges from the management of large tracts of public land including national and state parks, and the alpine resorts, to the protection and preservation of our landscapes and biodiversity, even

the continuing evolution of our much loved zoos. “Climate change is not an abstract idea, and the time for arguing about the cause is long past. It is real, and is already affecting us all. “As my new parliamentary leader Michael O’Brien noted recently, what we need now is a contest of ideas about how we can best address it. I am very much looking forward to working with communities across the state in developing those ideas and dealing with this critical issue.” Mr Morris said the new opposition portfolio of bays protection “demonstrates clearly the importance the Liberal Party places on the long-term health of [Port Phillip and Western Port] bays”. The bays were more than “busy commercial ports”. “Whether sailing, diving, swimming, fishing, or simply standing on the shore enjoying the view, the bays are a central feature of our lives.” Mr O’Brien described the shadow cabinet as a “balance of skills and experience with an injection of new talent to help the Liberal Nationals win the contest of ideas over how best to take Victoria forward”. He used the announcement to take a swipe at the Andrews Labor Government being “top-heavy with former union officials”.

Carved Ham on the Bone

Gluten Free Ham on the Bone