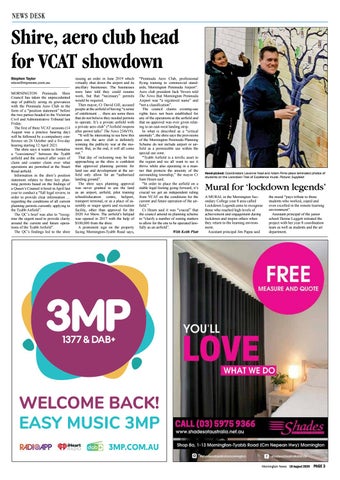 Shire, aero club head for VCAT showdown Stephen Taylor steve@mpnews.com.au MORNINGTON Peninsula Shire Council has taken the unprecedented step of publicly airing its grievances with the Peninsula Aero Club in the form of a “position statement” before the two parties headed to the Victorian Civil and Administrative Tribunal last Friday. The first of three VCAT sessions (14 August was a practice hearing day) will be followed by a compulsory conference on 26 October and a five-day hearing starting 12 April 2021. The shire says it wants to formalise a “coexistence” between the Tyabb airfield and the council after years of claim and counter claim over what operations are permitted at the Stuart Road airfield. Information in the shire’s position statement relates to three key planning permits based on the findings of a Queen’s Counsel it hired in April last year to conduct a “full legal review, in order to provide clear information … regarding the conditions of all current planning permits currently applying to the Tyabb Airfield”. The QC’s brief was also to “recognise the urgent need to provide clarity around the current and future operations of the Tyabb Airfield”. The QC’s findings led to the shire

issuing an order in June 2019 which virtually shut down the airport and its ancillary businesses. The businesses were later told they could resume work, but that “necessary” permits would be required. Then mayor, Cr David Gill, accused people at the airfield of having “a sense of entitlement … there are some there that do not believe they needed permits to operate. It’s a private airfield with a private aero club” (“Airfield reopens after permit talks” The News 25/6/19). “It will be interesting to see how this pans out; the aero club is definitely winning the publicity war at the moment. But, in the end, it will all come out.” That day of reckoning may be fast approaching as the shire is confident that approved planning permits for land use and development at the airfield only allow for an “authorised landing ground”. The shire says planning approval was never granted to use the land as an airport, airfield, pilot training school/education centre, heliport, transport terminal, or as a place of assembly or major sports and recreation facility, other than approval for the 2020 Air Show. The airfield’s helipad was opened in 2017 with the help of $100,000 from the shire. A prominent sign on the property facing Mornington-Tyabb Road says,

“Peninsula Aero Club, professional flying training to commercial standards, Mornington Peninsula Airport”. Aero club president Jack Vevers told The News that Mornington Peninsula Airport was “a registered name” and “not a classification”. The council claims existing-use rights have not been established for any of the operations at the airfield and that no approval was ever given relating to an east-west landing strip. In what is described as a “critical anomaly”, the shire says the provisions of the Mornington Peninsula Planning Scheme do not include airport or airfield as a permissible use within the special use zone. “Tyabb Airfield is a terrific asset to the region and we all want to see it thrive while also operating in a manner that protects the amenity of the surrounding township,” the mayor Cr Sam Hearn said. “In order to place the airfield on a stable legal footing going forward, it’s crucial we get an independent ruling from VCAT on the conditions for the current and future operation of the airfield.” Cr Hearn said it was “crucial” that the council amend its planning scheme to “clarify a number of zoning matters to allow for the site to be operated lawfully as an airfield”. With Keith Platt

Mural for ‘lockdown legends’ A MURAL in the Mornington Secondary College year 8 area called Lockdown Legends aims to recognise those who reached high levels of achievement and engagement during lockdown and inspire others when they return to the learning environment. Assistant principal Jim Papas said

the mural “pays tribute to those students who worked, coped and even excelled in the remote learning environment”. Assistant principal of the junior school Denise Leggett initiated the project with her year 8 coordination team as well as students and the art department.