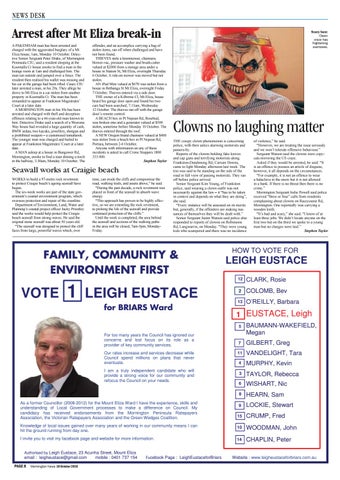 Arrest after Mt Eliza break-in A PAKENHAM man has been arrested and charged with the aggravated burglary of a Mt Eliza house, 1am, Monday 10 October. Detective Senior Sergeant Peter Drake, of Mornington Peninsula CIU, said a resident sleeping at the Koornalla Cr house awoke to find a man in the lounge room at 1am and challenged him. The man ran outside and jumped over a fence. The resident then realised his wallet was missing and his car in the garage had been rifled. Casey CIU later arrested a man, in his 20s. They allege he drove to Mt Eliza in a car stolen from another property in Koornalla Cr. The man has been remanded to appear at Frankston Magistratesâ&#x20AC;&#x2122; Court at a later date. A MORNINGTON man in his 30s has been arrested and charged with theft and deception offences relating to a 66-year-old man known to him. Detective Drake said a search of a Weerona Way house had revealed a large quantity of cash, BMW sedan, two kayaks, jewellery, shotgun and a prohibited weapon â&#x20AC;&#x201C; a customised tomahawk. The younger man was charged and bailed to appear at Frankston Magistratesâ&#x20AC;&#x2122; Court at a later date. A MAN asleep at a house in Bungower Rd, Mornington, awoke to find a man shining a torch in the hallway, 3.30am, Monday 10 October. The

offender, and an accomplice carrying a bag of stolen items, ran off when challenged and have not been found. THIEVES stole a lawnmower, chainsaw, blower-vac, pressure washer and brush-cutter valued at $2000 from a storage area under a house in Station St, Mt Eliza, overnight Thursday 6 October. A ride-on mower was moved but not stolen. AN iPad Mini valued at $670 was stolen from a house in Bethanga St Mt Eliza, overnight Friday 7 October. Thieves entered via a side door. THE owner of a Kilbirnie Cl, Mt Eliza, house heard his garage door open and found his two cars had been searched, 7.15am, Wednesday 12 October. The thieves ran off with the garage doorâ&#x20AC;&#x2122;s remote control. A BEACH box in Pt Nepean Rd, Rosebud, was broken into and a generator valued at $500 stolen, sometime before Monday 10 October. The thieves entered through the roof. A NEW Oregon brand chainsaw valued at $400 was stolen from a beach box in Pt Nepean Rd, Portsea, between 2-6 October. Anyone with information on any of these incidents is asked to call Crime Stoppers 1800 333 000. Stephen Taylor

time, can erode the cliffs and compromise the road, walking trails, and assets above,â&#x20AC;? he said. â&#x20AC;&#x153;During the past decade, a rock revetment was placed in front of the seawall to absorb wave energy. â&#x20AC;&#x153;This approach has proven to be highly effective, so we are extending the rock revetment, to prolong the life of the seawall and provide continued protection of the cliffs.â&#x20AC;? Until the work is completed, the area behind the seawall and sections of the walking paths in the area will be closed, 7am-5pm, MondayFriday.

Clowns no laughing matter THE creepy clown phenomenon is concerning police, with their antics alarming motorists and passers-by. Reports of the clowns holding fake knives and cap guns and terrifying motorists along Frankston-Dandenong Rd, Carrum Downs, came to light Monday afternoon last week. The trio was said to be standing on the side of the road in full view of passing motorists. They ran off before police arrived. Senior Sergeant Kim Young, of Frankston police, said wearing a clown outfit was not necessarily against the law â&#x20AC;&#x201C; it â&#x20AC;&#x153;has to be taken in context and depends on what they are doingâ&#x20AC;?, she said. â&#x20AC;&#x153;Every instance will be assessed on its merits but, generally, if the offenders are making nuisances of themselves they will be dealt with.â&#x20AC;? Senior Sergeant Justin Watson said police also responded to reports of clowns on Robinsons Rd, Langwarrin, on Monday. â&#x20AC;&#x153;They were young kids who scampered and there was no incidence

For too many years the Council has ignored our concerns and lost focus on its role as a provider of key community services. Our rates increase and services decrease while Council spend millions on plans that never eventuate. I am a truly independent candidate who will provide a strong voice for our community and refocus the Council on your needs.

As a former Councillor (2008-2012) for the Mount Eliza Ward I have the experience, skills and understanding of Local Government processes to make a difference on Council. My candidacy has received endorsements from the Mornington Peninsula Ratepayers Association, the Victorian Ratepayers Association and the Green Wedges Coalition.

HOW TO VOTE FOR

Knowledge of local issues gained over many years of working in our community means I can hit the ground running from day one.