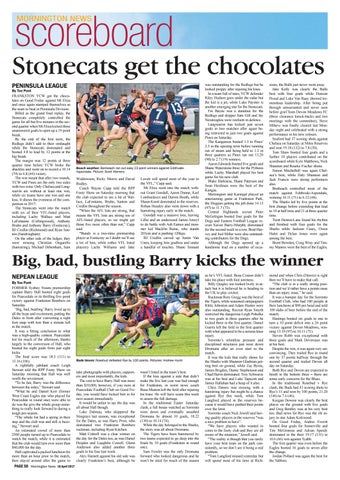 Stonecats get the chocolates PENINSULA LEAGUE

By Toe Punt FRANKSTON YCW got the chocolates on Good Friday against Mt Eliza and once again stamped themselves as the team to beat in Peninsula Division. Billed as the grand final replay, the Stonecats completely controlled the game for all but five minutes in the second quarter when Mt Eliza kicked three unanswered goals to open up a 19 point break. By the end of the first term, the Redlegs didn’t add to their onslaught while the Stonecats dominated and booted 4.8 to lead by 12 points at the big break. The margin was 12 points at three quarter time before YCW broke the shackles and went on to record a 10.14 (74) to 6.8 (44) victory. The win meant that after two rounds, YCW and Pines are the only two sides with two wins. Only Chelsea and Langwarrin are without at least one win, while six teams have one win and one loss. It shows the evenness of the competition in 2017. The Stonecats went into the match with six of their VFL-listed players, including Lachy Wallace and Matt LaFontaine (Collingwood), Anthony Bruhn and Anthony Barry (Footscray), BJ Credlin (Richmond) and Ryan Santon (Sandringham). On the other side of the ledger, they were missing Christian Ongarello (hamstring), Michael Debenham, Sam

Widdowson, Ricky Morris and David Bodley. Coach Wayne Capp told the RPP Footy Show on Saturday morning that the club expected to see a bit of Wallace, LaFontaine, Bruhn, Santon and Credlin throughout the season. “When the AFL lists are strong, that means the VFL lists are strong too of AFL-listed players, so we might get those five more often than not,” Capp said. “Bundy is a two-time premiership player at Footscray so I doubt we’ll see a lot of him, while (other VFL listed players) Lachy Williams and Jake

Lovett will spend most of the year in the VFL,” Capp said. Mt Eliza went into the match without Grant Goodall, Aaron Dunne, Karl Lombardozzi and Darren Booth, while Shaun Knott dominated in the reserves. Rohan Heasley also went down with a hamstring injury early in the match. Goodall was a massive loss, leaving Lillie and an undersized James Anwyl to do battle with Ash Eames and monster kid Macklin Raine, who stands 203cm and is pushing 120kgs. BJ Credlin carved up Justin Van Unen, keeping him goalless and under a handful of touches. Shane Tennant

was outstanding for the Redlegs but he looked proppy after injuring his knee. In a team full of stars, YCW defender Riley Hodson goes under the radar but the kid is a jet, while Luke Paynter is another emerging star for the Stonecats. Fin Bayne was a standout for the Redlegs and skipper Sam Gill and Jay Neratzoglou were resilient in defence. Langwarrin has kicked just seven goals in two matches after again being restricted to just two goals against Pines on Saturday. The Kangaroos booted 1.5 to Pines’ 2.3 in the opening term before running out of steam and being held to 1.2 in three quarters as Pines ran out 13.20 (98) to 2.7 (19) winners. Aaron Edwards booted five goals and Shane Waterstone three for the Pythons while Lachy Marshall played his best game for his new club. Blake Harkness, Shane Paterson and Sean Herdman were the best of the Kangas. Mornington and Karingal played an entertaining game at Frankston Park, the Doggies getting the job done 14.13 (97) to 11.7 (73). Central Highlands recruit Peter McGettigan booted four goals for the Dogs and Eastern Football League recruit Xavier Barry-Murphy dominated for the second week in a row. Brad Harvey and Joel Miller were also outstanding contributors for the Dogs. Although the Dogs opened up a handsome lead on a number of occa-

sions, the Bulls just never went away. Jake Kelly was clearly the Bulls best with four goals while Duncan Proud and Luke Van Raay showed tremendous leadership. After being put through unwarranted and never seen before grief from Devon Meadows FC (three clearance knock-backs and two meetings with the committee), Steve Mihevc was finally cleared last Monday night and celebrated with a strong performance in his new colours. Seaford had 37 scoring shots against Chelsea on Saturday at Miles Reserves and won 19.18 (132) to 7.8 (50). Tom Shaw booted four goals and a further 10 players contributed on the scoreboard while Kyle Matthews, Nick Shannon and Rourke Fischer shone. Simon Mitchelhill was again Chelsea’s best, while Daly Shannon and Jack Francis were strong performers also. Bonbeach controlled most of the match against Edithvale-Aspendale, winning 10.11 (71) to 6.12 (48). The Sharks led by five points at the first change before extending that lead to 19 at half time and 21 at three quarter time. Trent Dennis-Lane found his rhythm and finished with four goals for the Sharks while Jackson Casey, Owen Hulet and Dylan Jones were again among the best. Brent Bowden, Craig Wray and Timmy Mannix were the best of the Eagles.

Big, bad, bustling Barry kicks the winner NEPEAN LEAGUE By Toe Punt FORMER Sydney Swans premiership captain Barry Hall booted eight goals for Pearcedale in its thrilling five point victory against Frankston Bombers on Saturday. ‘Big, bad, bustling’ Barry lived up to all the hype and excitement, putting the Dales in front after converting a right foot snap with less than a minute left in the match. It was a fitting conclusion to what was a high-quality contest. Pearcedale led for much of the afternoon, thanks largely to the conversion of Hall, who booted his eight goals from just eight kicks. The final score was 18.3 (111) to 15.16 (106). A rightfully jubilant coach Leigh Stewart told the RPP Footy Show on Saturday morning that Hall was well worth the investment. “To be fair, Barry was the difference between the sides,” Stewart said. “What he and Daniel Kerr (former West Coast Eagles star who played for Pearcedale in round one) were able to do was the give the whole group something to really look forward to during a tough pre-season. “The whole list had a spring in their step and the club was and still is buzzing,” Stewart said. An estimated crowd of more than 2500 people turned up to Pearcedale to watch the match, while it is estimated that the club would turn over more than $40,000 for the day. Hall captivated a packed luncheon for more than an hour prior to the match, then stayed around after the game to

take photographs with players, supporters and most importantly, the kids. The cost to have Barry Hall was more than $10,000, however, if you were at Pearcedale Football Club on Good Friday, you would have locked him in for next season immediately. It would be unfair to say the day was all about Hall though. Luke Dalmau, who skippered the Stingrays last season, was exceptional for the Dales, as was Harry Prior, who dominated two Frankston Bombers ruckman, including Ryan Kitchen. Matt Cottrell was a clear winner on the day for the Dales too, as was Daniel Heijden and Laughlin Cowell. Glenn Anderson also added another three goals to his four last week. Alex Harnett against his old side was clearly Frankston’s best, although he

wasn’t listed in the team’s best. If the loss against a side that didn’t make the five last year was bad enough for Frankston, in worst news coach Beau Muston left the field after injuring his knee. He will have scans this week to assess the full damage. In the traditional Easter Saturday clash, a full house watched as Sorrento wore down and eventually smashed Dromana by almost 10 goals, 18.22 (130) to 10.14 (74). While the day belonged to the Sharks, the story was all about Dromana. The Tigers have been hammered by two teams expected to go deep into the finals by 10 goals (Frankston in round one). Sam Fowler was the only Dromana forward who looked dangerous and he won’t be sited for much of the season

as he’s VFL listed. Beau Cosson didn’t take his place with foot soreness. Billy Quigley too looked lively in attack but it is believed he is heading to the UK to play cricket. Ruckman Rory Gregg was the best of the Tigers, while seasoned campaigners Rikki Johnston and Adam Hunter were also outstanding. Recruit Ryan Smyth restricted the dangerous Leigh Poholke to two goals in three quarters after he kicked three in the first quarter. Daniel Guerts left the field in the first quarter with what appeared to be a serious knee injury. Sorrento’s relentless pressure and disciplined structures just wore down Dromana after an even start to the match. It was the kids that really shone for the Sharks with Shannon Gladman getting best on ground, while Zac Byrns, James Brigden, Danny Stephenson and Chad Harris dominated. Troy Schwarze was at his best and Luke Tapscott and James Hallahan had a heap of it also. Chris Dawes was missing with a hamstring injury but might be a chance against Rye this week, while Tom Langford played in the reserves because it would have pushed their points over the limit. Sorrento coach Nick Jewell said having quality players in the reserves “was a nice problem to have”. “We have players who wanted to come to the footy club and they are all aware of the situation,” Jewell said. “The reality is though that you rarely have your best team on the park consistently, so we don’t see it being a real problem. “Tom Langford missed yesterday but will spend most of his time at Rich-

mond and when Chris (Dawes) is right then we’ll have to make that call. “The club is in a really strong position and we’d rather have a points issue than an injury issue,” he said. It was a bumper day for the Sorrento Football Club, who had 180 people at their luncheon at $90 per head and sold 100 slabs of beer before the end of the match. Hastings booted six goals to one to turn a 10 point deficit into a 26 point victory against Devon Meadows, winning 13.19 (97) to 10.11 (71). Steven Robb was exceptional with three goals and Mark Devereaux was at his best. Despite the win, it was again very unconvincing. They trailed Rye in round one by 37 points halfway through the second quarter and trailed Devon all day on Saturday. Both Rye and Devon are expected to finish in the bottom three – there are some early concerns for the Blues. In the traditional Rosebud v Rye clash, the Buds had 41 scoring shots to Rye’s 11 and won by 100 points, 21.20 (146) to 7.4 (46). Keegan Downie was clearly the best player on the ground with five goals and Greg Bentley was at his very best too. Bad news for Rye was the rib injury to star Adam Kirkwood. On Good Friday, Andres Everitt booted four goals for Somerville and Tim McGenniss and Adrian Speedy dominated in the their 19.17 (131) to 10.6 (66) win against Tyabb. The first quarter was even before the Eagles booted 16 goals to seven after the change. Jordan Pollard was again the best for the Yabbies.