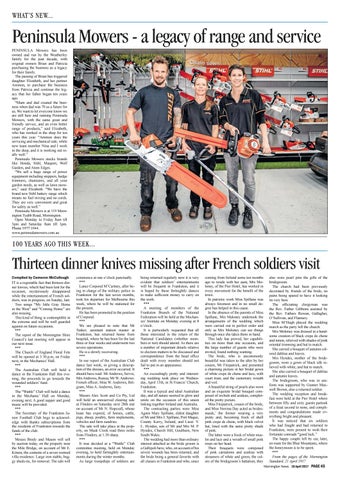 Peninsula Mowers - a legacy of range and service PENINSULA Mowers has been owned and run by the Weatherley family for the past decade, with original owners Brian and Patricia purchasing the business as a legacy for their family. The passing of Brian has triggered daughter Elizabeth, and her partner Ammon, to purchase the business from Patricia and continue the legacy that her father began ten years ago. “Mum and dad created the business when dad was 70 as a future for us. We want to let everyone know we are still here and running Peninsula Mowers, with the same great and friendly service, and an even better range of products,” said Elizabeth, who has worked in the shop for ten years this year. “Ammon does the servicing and mechanical side, while new team member Nina and I work in the shop, and it is working out really well.” Peninsula Mowers stocks brands like Honda, Stihl, Masport, Wolf Garden, and Atom Edges. “We sell a huge range of power equipment including snippers, hedge trimmers, chainsaws, and all your garden needs, as well as lawn mowers,” said Elizabeth. “We have the brand new Stihl battery range which means no fuel mixing and no cords. They are very convenient and great for safety as well.” Peninsula Mowers is at 119 Mornington Tyabb Road, Mornington. Open Monday to Friday 8am till 5pm and Saturday 8am till 1pm. Phone 5977 1944. www.peninsulamowers.com.au

Thirteen dinner knives missing after French soldiers visit Compiled by Cameron McCullough IT is a regretable fact that thirteen dinner knives, which had been lent for the occasion, mysteriously disappeared while the entertainment of French soldiers, was in progress, on Sunday, last. Two songs “My little Gray Home in the West” and “Coming Home” are also missing. This kind of thing is contemptible in the extreme and will be well guarded against on future occasions. *** The report of the Mornington Shire Council’s last meeting will appear in our next issue. *** The Church of England Floral Fete will be opened at 3 30.p.m, on Friday next, in the Mechanics’ Hall. *** The Australian Club will hold a dance in the Frankston Hall this evening, the proceeds to go towards the wounded soldiers’ fund. *** The “Wattle” Club will hold a dance in the Mechanic’ Hall on Monday, evening next. A good supper and good music will be provided. *** The Secretary of the Frankston Junior Football Club begs to acknowledge with thanks subscriptions from the residents of Frankston towards the funds of the club. *** Messrs Brody and Mason will sell by auction today, on the property near the Mile Bridge, on account of Mr E. Kitson, the contents of a seven roomed villa residence. Large iron stable, buggy sheds etc, for removal. The sale will

commence at one o’clock punctually. *** Lance Corporal M’Cartney, after being in charge of the military police in Frankston for the last seven months, took his departure for Melbourne this week, where he will be stationed for the present. He has been promoted to the position of Corporal. *** We are pleased to note that Mr Tasker, assistant station master at Frankston, has returned home from hospital, where he has been for the last three or four weeks and underwent two severe operations. He is a slowly recovering. *** In our report of the Australian Club dance last week, in giving a description of the dresses, an error occurred. It should have read: Mr Andrews, Servis; Mrs Andrews, Russia; Mr W. Andrews. French officer; Miss W. Andrews, Belgium; Miss A. Andrews, fairy. *** Messrs Alex Scott and Co Pty, Ltd will hold an unreserved clearing sale at Flinders on Saturday next 28th inst on account of Mr N. Hopcraft, whose lease has expired, of horses, cattle, pigs, sheep, poultry, farm implements, vehicles and farm sundries. The sale will take place at the property, on Musk Creek road three miles from Flinders, at 1.30 sharp. *** It was decided at a “Wattle” Club committee meeting, held on Monday evening, to hold fortnightly entertainments during the winter months. As large troopships of soldiers are

being returned regularly now it is very evident that soldiers’ entertainments will be frequent in Frankston, and it is hoped by these fortnightly dances to make sufficient money to carry on the work. *** A meeting of members of the Frankston Branch of the National Federation will be held at the Mechanics’ Institute on Monday evening at 8 o’clock. It is particularly requested that all those interested in the return of the National Candidates (whether members or not) should attend. As there are a number of important details relative to election matters to be discussed and correspondence from the head office dealt with every member should not fail to put in an appearance. *** An exceedingly pretty and interesting wedding took place on Wednesday, April 11th, in St Francis’ Church, Frankston. It was a typical and ideal Australian day, and all nature seemed to glow and smile on the occasion of this union linking together Ireland and Australia. The contracting parties were Miss Agnes Mary Spillane, eldest daughter of Mr and Mrs J. Spillane, Port Magee, County Kerry, Ireland, and Lieut. V. L. Hyndes, son of Mr and Mrs M. P. Hyndes, Church Hill, Goulburn, New South Wales. The wedding had more than ordinary interest attached as the bride groom is a Gallipoli hero, who, on account of his severe wounds has been returned, and the bride being a general favorite with all classes in Frankston and who, since

coming from Ireland some ten months ago to reside with her aunt, Mrs Moloney, of the Pier Hotel, has worked in every movement for the benefit of the town. In patriotic work Miss Spillane was always foremost and in no small degree has helped in this cause. In the absence of the parents of Miss Spillane, Mrs Maloney undertook the arrangements of the wedding which were carried out in perfect order and only as Mrs Moloney can see things through once she takes them in hand. This lady has proved, her capabilities on more than one occasion, and the large number of guests who were invited, found nothing wanting. The bride, who is uncommonly beautiful was taken to the alter by her cousin, Mr Fitzpatrick, and presented a charming picture in her bridal gown of white crepe de chene and lace, with court train, and the customary wreath and veil. A beautiful string of pearls also worn and an exquisite bridal bouquet composed of orchids and azaleas, completed the pretty picture. Miss Fitzpatrick, cousin of the bride, and Miss Nerrina Day acted as bridesmaids,’ the former wearing a very pretty and, becoming frock of shell pink crepe de chene, with black velvet hat, lined with the same pretty shade of pink. The latter wore a frock of white muslin and lace and a wreath of small pink roses on her head. Their bouquets were composed of pink carnations and azaleas with streamers of white and green, the colors of the bridegroom’s battalion, they

also wore pearl pins the gifts of the bridegroom. The church had been previously decorated by friends of the bride, no pains being spared to have it looking its very best. The officiating clergyman was the Rev. Father Gibbons assisted by the Rev. Fathers Rowan, Gallagher, O’Sullivan, and Flannery. Miss M’Hugh played the wedding march as the party left the church. Mrs Moloney was dressed in a handsome creation of black crepe de chene and ninon, relieved with shades of pink oriental trimming and hat to match. She carried a bouquet of autumn colored dahlias and leaves. Mrs Hyndes, mother of the bridegroom, wore a gown of black silk relieved with white, and hat to match. She also carried a bouquet of dahlias and autumn leaves. The bridegroom, who was in uniform was supported by Gunner Maxwell Brown, also a returned soldier. The wedding reception and breakfast were held at the Pier Hotel where between fifty and sixty guests partook of a feast second to none, and compliments and congratulations made everything bright and pleasant. It was noticed that six soldiers who had fought and had returned to Frankston, were present to wish their fortunate comrade “good luck.” The happy couple left by car, later, en route for the Blue Mountains, where the honeymoon is to be spent. *** From the pages of the Mornington Standard, 21 April 1917 Mornington News 18 April 2017