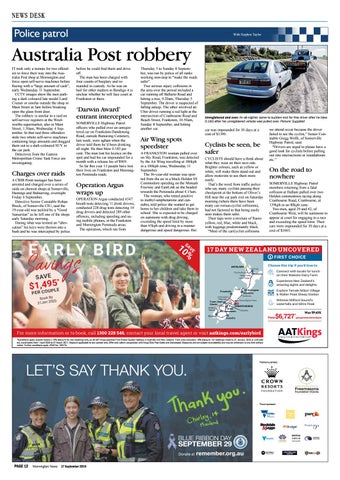 Australia Post robbery IT took only a minute for two offenders to force their way into the Australia Post shop at Mornington and force open self-serve machines before fleeing with a “large amount of cash”, early Wednesday 11 September. CCTV images show the men parking a dark coloured late model Land Cruiser or similar outside the shop in Main Street at 3am before breaking open the glass front door. The robbery is similar to a raid on self-service registers at the Woolworths supermarket, also in Main Street, 1.50am, Wednesday 4 September. In that raid three offenders stole two whole self-serve machines containing large amounts and dragged them out to a dark-coloured SUV in the car park. Detectives from the Eastern Metropolitan Crime Task Force are investigating.

Charges over raids A CRIB Point teenager has been arrested and charged over a series of raids on chemist shops at Somerville, Hastings and Balnarring, overnight Friday 6 September. Detective Senior Constable Rohan Brock, of Somerville CIU, said the 19-year-old was tackled by a “Good Samaritan” as he left one of the shops early Saturday morning. During what was termed an “altercation” his keys were thrown into a bush and he was intercepted by police

before he could find them and drive off. The man has been charged with four counts of burglary and remanded in custody. As he was on bail for other matters in Bendigo it is unclear whether he will face court at Frankston or there.

‘Darwin Award’ entrant intercepted SOMERVILLE Highway Patrol officers who pulled over an unregistered car on Frankston-Dandenong Road, outside Bunurong Cemetery, last week, were aghast when the driver told them he’d been drinking all night. He then blew 0.183 per cent. The man lost his licence on the spot and had his car impounded for a month with a release fee of $969. So far this year 13 people have lost their lives on Frankston and Mornington Peninsula roads.

Thursday 5 to Sunday 8 September, was run by police of all ranks working non-stop to “make the roads safer”. Two serious injury collisions in the area over the period included a car running off Ballarto Road and hitting a tree, 9.20am, Thursday 5 September. The driver is suspected of falling asleep. The other involved an Uber driver running a red light at the intersection of Cranbourne Road and Beach Street, Frankston, 10.50am, Sunday 8 September, and hitting another car.

Air Wing spots speedster A FRANKSTON woman pulled over on Sky Road, Frankston, was detected by the Air Wing travelling at 186kph in a 100kph zone, Wednesday 11 September. The 36-year-old woman was spotted from the air in a black Holden SS Commodore speeding on the Monash Freeway and EastLink as she headed towards the Peninsula about 4.15am. The woman, who tested positive to methyl-amphetamine and cannabis, told police she wanted to get home to her children and take them to school. She is expected to be charged on summons with drug driving, exceeding the speed limit by more than 45kph and driving in a manner dangerous and speed dangerous. Her

Unregistered and over: An all-nighter came to sudden end for this driver after he blew 0.183 after his unregistered vehicle was pulled over. Picture: Supplied

Cyclists be seen, be safer CYCLISTS should have a think about what they wear on their next ride. Brighter colours, such as yellow or white, will make them stand out and allow motorists to see them more easily. That’s the word from traffic police who say many cyclists passing their checkpoint at the bottom of Oliver’s Hill near the car park exit on Saturday morning (where there have been many car-versus-cyclist collisions), had not factored in that being easily seen makes them safer. Their tops were a mixture of fluoro yellow, red, blue, white and black, with leggings predominantly black. “Most of the car/cyclist collisions

SOMERVILLE Highway Patrol members returning from a fatal collision at Hallam pulled over two Holden commodores racing along Cranbourne Road, Cranbourne, at 139kph in an 80kph zone. Two men, aged 29 and 42, of Cranbourne West, will be summons to appear at court for engaging in a race and exceeding the speed limit. Their cars were impounded for 30 days at a cost of $1005.

Choose this trip if you’d love to:

On the road to nowhere

we attend occur because the driver failed to see the cyclist,” Senior Constable Gregg Wolfe, of Somerville Highway Patrol, said. “Drivers are urged to please have a good look for cyclists before pulling out into intersections or roundabouts etc.”

Connect with locals for lunch on their Waikato Dairy Farm

For more information or to book, call 1300 228 546, contact your local travel agent or visit aatkings.com/earlybird *Conditions apply: Guests receive a 10% discount for new bookings only, on all AAT Kings operated First Choice Guided Holidays in Australia and New Zealand. From price includes a 10% discount. For bookings made by 31 January 2020 or until sold out, travel dates from 1 April 2020 to 31 March 2021. Discount applicable to tour portion only. Offer only valid in conjunction with Kings Club Past Guest and Concession Discounts and are subject to availability and may be withdrawn at any time without notice. Further conditions apply. ATAS No. 10527c.