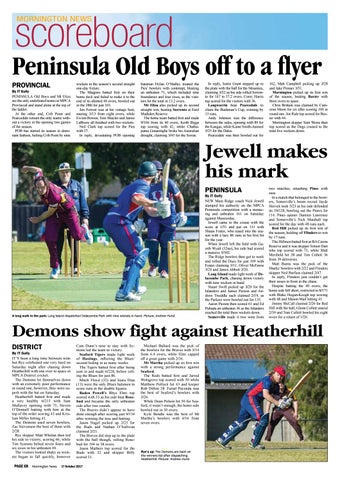 Peninsula Old Boys off to a flyer PROVINCIAL

By IT Gully PENINSULA Old Boys and Mt Eliza are the only undefeated teams in MPCA Provincial and stand alone at the top of the ladder. At the other end, Crib Point and Pearcedale remain the only teams without a victory in the opening two games of the season. POB has started its season in dominant fashion, belting Crib Point by nine

wickets in the season’s second straight one-day fixture. The Magpies batted first on their home deck and failed to make it to the end of its allotted 40 overs, bowled out in the 38th for just 103. Jon Forrest was at his vintage best, snaring 3/13 from eight overs, while Eivion Bowen, Tom Shayler and James LaBrooy all finished with two wickets. Neil Clark top scored for the Pies with 27. In reply, devastating POB opening

batsman Dylan O’Malley treated the Pies’ bowlers with contempt, blasting an unbeaten 71, which included nine boundaries and four sixes, as the vistitors hit the total in 13.2 overs. Mt Eliza also picked up its second straight win, beating Sorrento at Emil Madsden Reserve. The home team batted first and made 9/160 from its 40 overs, Keith Biggs top scoring with 42, while Chathupama Gunasinghe broke his Australian drought, claiming 3/45 for the Sorras.

In reply, Justin Grant stepped up to the plate with the ball for the Mounties, claiming 3/22 as his side rolled Sorrento for 147 in 37.2 overs. Corey Harris top scored for the visitors with 36. Langwarrin beat Pearcedale to claim the Bushman’s Cup, winning by 13 runs. Andy Johnson was the difference between the sides, opening with 89 for the Kangas, while Kaine Smith claimed 5/25 for the Dales. Pearcedale was then bowled out for

162, Matt Campbell picking up 3/28 and Jake Prosser 3/51. Mornington picked up its first win of the season, beating Baxter with three overs to spare. Chris Brittain was claimed by Cameron Moon for six after scoring 100 in round one. Joe Rule top scored for Baxter with 44. Mornington skipper Sam Weise then top scored as the Dogs cruised to the total five wickets down.

By IT Gully NEW Main Ridge coach Nick Jewell stamped his authority on the MPCA Peninsula competition with a menacing and unbeaten 161 on Saturday against Moorooduc. Jewell came to the crease with the score at 1/31 and put on 131 with Shaun Foster, who eased into the season with a lazy 86 runs in his first hit for the year. When Jewell left the field with Gareth Wyatt (32no), his side had scored a massive 3/302. The Ridge bowlers then got to work and rolled the Ducs for just 109 with Foster claiming 3/11, Oliver McEnroe 3/24 and James Abbott 3/20. Long Island made light work of Delacombe Park, chasing down victory with nine wickets in hand. Stuart Swift picked up 3/20 for the Islanders and James Paxton and Andrew Tweddle each claimed 2/19, as the Parkers were bowled out for 135. Aaron Paxton then scored 61 and Ed Pubudu an unbeaten 36 as the Islanders reached the total three wickets down. Somerville made it two wins from

two matches, smashing Pines with ease. In a match that belonged to the bowlers, Somerville’s boom recruit Jayde Herrick took 5/23 as his side defended its 10/128, bowling out the Piners for 114. Pines opener Damien Lawrence and Somerville’s Nick Marshall top scored for the day with 48 runs each. Red Hill picked up its first win of the season, holding off Flinders to win by 17 runs. The Hillmen batted first at BA Cairns Reserve and it was skipper Simon Dart who top scored with 73, while Matt Merifield hit 38 and Tim Collett 36 from 39 deliveries. Matt Burns was the pick of the Sharks’ bowlers with 2/22 and Flinders skipper Neil Barfuss claimed 2/47. In reply, Flinders just couldn’t get their noses in front in the chase. Despite batting the 40 overs, the home side fell short, restricted to 8/171 with Blake Hogan-Keogh top scoring with 48 and Mason Mail hitting 41. Jimmy McCall claimed 2/26 for Red Hill with the ball, Glenn Collett snared 2/39 and Tom Collett bowled his eight overs for a return of 1/20.

By IT Gully IT’S been a long time between wins but Rye celebrated one very hard on Saturday night after chasing down Heatherhill with one over to space in MPCA District cricket. The Demons let themselves down with an extremely poor performance in round one, however, they were superb with the bat on Saturday. Heatherhill batted first and made a very healthy 6/215 with Sam Mullavey opening with 75, Steven O’Donnell batting with him at the top of the order scoring 43 and Kristian Miller hitting 41. The Demons used seven bowlers, Zac Stevenson the best of them with 2/28. Rye skipper Matt Whelan then led his side to victory, scoring 66, while Tim Symons belted seven fours and six sixes in his unbeaten 69. The visitors looked shaky as wickets began to fall quickly, however

Cam Dunn’s nine to stay with Symons led the team to victory. Seaford Tigers made light work of Hastings, inflicting the Blues’ second hiding in as many weeks. The Tigers batted first after being sent in and made 6/228, before rolling the Blues for just 86. Mitch Floyd (32) and Isuru Dias (13) were the only Blues batsmen to score runs in the double figures. Baden Powell’s Rhys Elmi top scored with 55 as his side beat Rosebud and became the only unbeaten side after two rounds. The Braves didn’t appear to have done enough after scoring just 9/134 after winning the toss and batting. Jason Nagel picked up 2/25 for the Buds and Nathan O’Sullivan claimed 2/21. The Braves did step up to the plate with the ball though, rolling Rosebud for 104 in 38 overs. Jason Mathers top scored for the Buds with 32 and skipper Billy scored 31.

Michael Ballard was the pick of the bowlers for the Braves with 3/14 from 6.4 overs, while Elmi capped off a great game with 2/16. Mt Martha picked up its first win with a strong performance against Seaford. The Reds batted first and Jarred Wolsgrove top scored with 50 while Matthew Pollock hit 43 and keeper Rob Dillon 28. Faisal Payenda was the best of Seaford’s bowlers with 3/26. While Dean Polson hit 50 for Seaford, it wasn’t enough, the home side bowled out in 30 overs. Kyle Bendle was the best of Mt Martha’s bowlers with 4/16 from seven overs.

Rye’s up: The Demons are back on the winners list after dispatching Heatherhill. Picture: Andrew Hurst