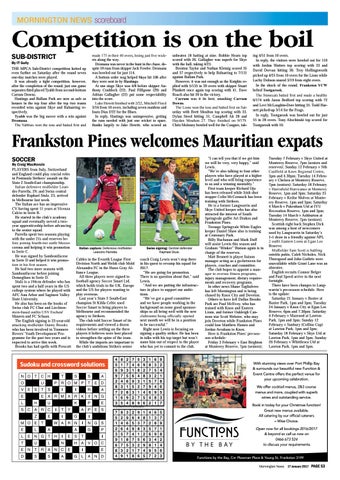 Competition is on the boil SUB-DISTRICT

By IT Gully THE MPCA Sub-District competition hotted up even further on Saturday after the round seven one-day matches were played. It was already a tight competition, however, after the completion of the round, just one game separates third placed Tyabb from second-bottom Carrum Downs. Hastings and Ballam Park are now as safe as houses in the top four after the top two teams recorded wins against Skye and Balnarring respectively. Tyabb was the big mover with a win against Dromana. The Yabbies won the toss and batted first and

made 175 in their 40 overs, losing just five wickets along the way. Dromana was never in the hunt in the chase, despite 59 runs from skipper Jack Fowler. Dromana was bowled out for just 114. A bottom order wag helped Skye hit 106 after they were sent in by Hastings. At one stage Skye was 4/8 before skipper Anthony Craddock (22), Paul Fillipone (29) and Adrian Gallagher (22) put some respectability into the score. Luke Hewitt finished with 2/22, Mitchell Floyd 3/16 from 10 overs, including seven maidens and Isuru Dias 2/22 for the Blues. In reply, Hastings was unimpressive, getting the runs needed with just one wicket to spare, thanks largely to Jake Hewitt, who scored an

unbeaten 18 batting at nine. Robbie Hearn top scored with 26. Gallagher was superb for Skye with the ball, taking 4/23. Brenton Taylor and Nathan Kleinig scored 35 and 37 respectively to help Balnarring to 7/131 against Ballam Park. However, it was not enough as the Knights replied with 5/135 in 39 overs with skipper Stuart Plunkett once again top scoring with 41. Dave Roach also hit 20 in the victory. Carrum was it its best, smashing Carrum Downs. The Lions won the toss and batted first on Saturday with Brett Moulton top scoring with 33, Dylan Steed hitting 31, Campbell Ak 28 and Hayden Moulton 27. They finished on 9/179. Chris Moloney bowled well for the Cougars, tak-

ing 4/51 from 10 overs. In reply, the visitors were bowled out for 110 with Jordan Watters top scoring with 33 and David Dervan hitting 30. Troy Hollingsworth picked up 4/25 from 10 overs for the Lions while Lachy Dobson snared 3/19 from eight overs. In the shock of the round, Frankston YCW belted Tootgarook. The Stonecats batted first and made a healthy 6/174 with Jason Bedford top scoring with 72 and Levi McLoughin-Dore hitting 35. Todd Harnett picked-up 3/14 for the Frogs. In reply, Tootgarook was bowled out for just 55 in 28 overs. Tony Abschinski top scored for Tootgarook with 10.

By Craig MacKenzie PLAYERS from Italy, Switzerland and England could play crucial roles in Peninsula Strikers’ assault on the State 2 South-East championship. Italian defensive midfielder Leandro Parrella, 29, and Swiss central defender Raphael Stulz, 23, arrived in Melbourne last week. The Italian ace has an impressive CV having spent 11 years at Vicenza Calcio in Serie B. He started in the club’s academy squad and eventually served a twoyear apprenticeship before advancing to the senior squad. Parrella spent two seasons playing with the under 21s and reserves before joining fourth-tier outfit Mezzocorona and helping it win promotion to Serie C. He was signed by Sambonifacese in Serie D and helped it win promotion in his first season. He had two more seasons with Sambonifacese before joining Domegliara in Serie D. Stulz is a 194cm defender who has spent two and a half years in the US college system where he played with AFC Ann Arbor and Saginaw Valley State University. He also has been on the books of Swiss club FC Chur and Liechtenstein-based outfits USV Eschen/ Mauren and FC Schaan. The English signing is 22-year-old attacking midfielder Danny Brooks who has been involved in Tranmere Rovers’ Youth Development Programme for the past two years and is expected to arrive this week. Brooks has had spells with Prescott

Cables in the Evostik League First Division North and Welsh club Mold Alexandra FC in the Huws Gray Alliance League. All three players were signed to football agency Soccer Smart Ltd, which holds trials in the UK, Europe and the US for players wanting to play overseas. Last year’s State 2 South-East champion St Kilda Celtic used Soccer Smart to bring players to Melbourne and recommended the agency to Strikers. The club told Soccer Smart of its requirements and viewed a dozen videos before settling on the three players it believes were best placed to strengthen the spine of the team. While the imports are important to the club’s ambitions Strikers senior

coach Craig Lewis won’t stop there in his quest to revamp his squad for 2017. “We are going for promotion. There is no question about that,” said Lewis. “And we are putting the infrastructure in place to support our ambitions. “We’ve got a good committee and we have people working in the background on some good sponsorships so all being well with the new clubrooms being officially opened next month we will be in a position to be successful.” Right now Lewis is focusing on signing a quality striker. He has been in talks with his top target but won’t name him out of respect to the player who has yet to commit to the club.

“I can tell you that if we get him we will be very, very happy,” said Lewis. “We’re also talking to four other players who have played at a higher level and who will bring experience to us and a winning mentality.” First team keeper Richard Ojo has been released while Irish shot stopper Colin McCormack has been training with Strikers. He is a former Langwarrin and Skye United keeper who has also attracted the interest of South Springvale gaffer Ari Drakos and Frankston Pines. Teenage Springvale White Eagles keeper Daniel Shaw also is training at Centenary Park. Billy Buchanan and Mark Duff will assist Lewis this season and Graham “Winker” Watson again is in charge of the reserves. Matt Bennett is player liaison manager acting as a go-between for players, coaches and committee. The club hopes to appoint a manager to oversee fitness programs, injury management, dietary requirements and recovery programs. In other news Shane Tagliaferro has left Mornington and is being chased by Knox City and Doveton. Others to have left Dallas Brooks Park are Paul McEvoy, who has trained with Knox and Eastern Lions, and former Oakleigh Cannons star Scott Webster, who may join Doveton while Frankston Pines could lose Matthew Hames and Jordan Avraham to Knox. Here is Frankston Pines’ pre-season schedule: Friday 3 February v East Brighton at Monterey Reserve, 7pm (seniors);

With stunning views over Port Phillip Bay & surrounds our beautiful new Function & Event Centre offers the perfect venue for your upcoming celebration. We offer cocktail menus, 2&3 course menus and more, coupled with superb wines and outstanding service. Book in today for your Christmas function! Great new menus available. All catering by our official caterers – Wise Choice. Open now for all bookings 2016/2017 & beyond so call us now on 0466 673 524 to discuss your requirements. Functions by the Bay, Cnr Plowman Place & Young St, Frankston 3199 Mornington News