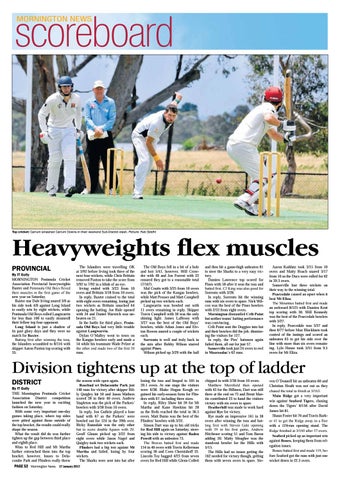 By IT Gully MORNINGTON Peninsula Cricket Association Provincial heavyweights Baxter and Peninsula Old Boys flexed their muscles in the first game of the new year on Saturday. Baxter star Dale Irving snared 3/0 as his side took 4/0 against Long Island to easily win by eight wickets, while Peninsula Old Boys rolled Langwarrin for less than 100 to easily steamroll their fellow top four opponent. Long Island is just a shadow of its past glory days and they were no match for Baxter. Batting first after winning the toss, the Islanders scrambled to 8/116 with skipper Aaron Paxton top scoring with 35.

The Islanders were travelling OK at 3/92 before Irving took three of the next four wickets, while Chris Brittain removed Paxton to take the score from 3/92 to 7/92 in a blink of an eye. Irving ended with 3/23 from 10 overs and Brittain 3/18 from 10 overs. In reply, Baxter cruised to the total with eight overs remaining, losing just two wickets as Brittain smacked 64 opening the batting, Joe Rule opened with 34 and Daniel Warwick was unbeaten on 21. In the battle for third place, Peninsula Old Boys had very little trouble against Langwarrin. Dylan O’Malley went to town on the Kangas bowlers early and made a 54 while his teammate Wade Pelzer at the other end made two of the first 50 runs.

The Old Boys fell in a bit of a hole and lost 5/41, however, Will Crowder with 48 and Jon Forrest with 22 ensured they got to a reasonable total (7/167). Mal Coutts with 3/25 from 10 overs was the pick of the Kangas bowlers, while Matt Prosser and Matt Campbell picked up two wickets each. Langwarrin was bowled out with 11 overs remaining in reply. Skipper Travis Campbell with 36 was the only shining light. James LaBrooy with 3/27 was the best of the Old Boys’ bowlers, while Adam Jones and Eivion Bowen snared a couple of wickets each. Sorrento is well and truly back in the mix after Bobby Wilson starred against Pines. Wilson picked up 3/29 with the ball

and then hit a game-high unbeaten 81 to steer the Sharks to a very easy victory. Damien Lawrence top scored for Pines with 58 after it won the toss and batted first. CJ King was also good for Sorrento with 3/28. In reply, Sorrento hit the winning runs with six overs to spare. Nick Wilcox was the best of the Pines bowlers with 2/33 from eight overs. Mornington dismantled Crib Point but neither teams’ batting performance was convincing. Crib Point sent the Doggies into bat and their bowlers did the job, dismissing the visitors for 127. In reply, the Pies’ batsmen again failed them, all out for just 57. Somerville took just 24 overs to reel in Moorooduc’s 62 runs.

Aaron Kaddatz took 3/15 from 10 overs and Matty Roach snared 3/17 from 10 as the Ducs were rolled for 62 in 39.3 overs. Somerville lost three wickets on their way to the winning total. Pearcedale caused an upset when it beat Mt Eliza. The Mounties batted first and made an awkward 8/125 with Damien Kent top scoring with 30. Will Kennedy was the best of the Pearcedale bowlers with 3/27. In reply, Pearcedale was 3/37 and then 6/77 before Max Blackburn took control of the innings and scored an unbeaten 63 to get his side over the line with more than six overs remaining. Lyle House took 3/51 from 9.5 overs for Mt Eliza.

Division tightens up at the top of ladder DISTRICT

By IT Gully THE Mornington Peninsula Cricket Association District competition launched the new year in exciting fashion on Saturday. With some very important one-day games taking place, where top sides were pitted against those outside of the top bracket, the results could really shape the season. What the result did do was further tighten up the gap between third place and eighth place. Wins to Red Hill and Mt Martha further entrenched them into the top bracket, however, losses to Delacombe Park and Flinders really threw

the season wide open again. Rosebud set Delacombe Park just 140 runs for victory after skipper Billy Quigley hit 50 and Jason Mathers scored 28 in their 40 overs. Andrew Stapleton was the pick of the Parkers’ bowlers with 3/38 from 10 overs. In reply, Jon Guthrie played a lone hand with 67 as the Parkers’ were bowled out for 124 in the 39th over. Ricky Ramsdale was the only other bat to score double figures with 20. Geoff Glaum picked up 3/22 from eight overs while Jason Nagel and Quigley took two wickets each. Flinders had a big test against Mt Martha and failed, losing by four wickets. The Sharks were sent into bat after

losing the toss and limped to 105 in 39.1 overs. At one stage the visitors were 6/38. Blake Hogan Keogh regained his early-season form for Flinders with 67, including three sizes. In reply, Riley Shaw hit 39 for Mt Martha and Kane Hawkins hit 28 as the Reds reached the total in 36.5 overs. Matt Burns was the best of the Flinders’ bowlers with 3/32. Simon Dart was up to his old tricks for Red Hill again on Saturday, steering his side to victory against Baden Powell with an unbeaten 73. The Braves batted first and made 154 in 40 overs with Travis Kellerman scoring 36 and Coen Chernishoff 33. Lincoln Toy bagged 4/23 from seven overs for Red Hill while Glenn Collett

chipped in with 2/30 from 10 overs. Matthew Merrifield then opened with 43 for the Hillmen, Dart was still there at the end on 73 and Brent Martin contributed 23 to hand the visitors victory with six overs to spare. Heatherhill was made to work hard against Rye for victory. Rye made an impressive 161 in 38 overs after winning the toss and batting first with Steven Gale opening with 39 in his first game, Andrew Hitchener scoring 51 and Tom Baron adding 20. Matty Meagher was the stand-out bowler for the Hills with 5/15. The Hills had no issues getting the 162 needed for victory though, getting them with seven overs to spare. Ste-

ven O’Donnell hit an unbeaten 60 and Christian Heath was not out as they chased the total to finish at 3/163. Main Ridge got a very important win against Seaford Tigers, chasing down the Tigers’ 6/156 after David James hit 81. Shaun Foster hit 76 and Travis Barker 41 to get the Ridge away to a flier with a 124-run opening stand. The Ridge finished at 3/160 after 37 overs. Seaford picked up an important win against Boneo, keeping them from relegation issues. Boneo batted first and made 119, before Seaford got the runs with just one wicket down in 22.3 overs.