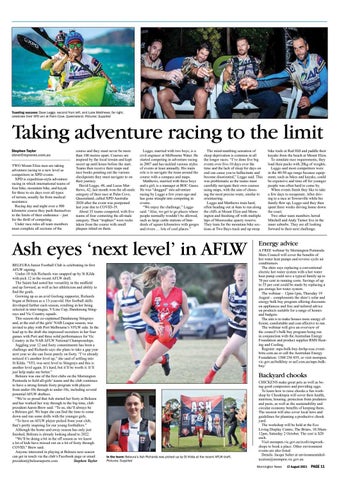 Taking adventure racing to the limit Stephen Taylor steve@mpnews.com.au TWO Mount Eliza men are taking adventure racing to a new level as competitors in XPD events. XPD is expedition-style adventure racing in which international teams of four hike, mountain bike, and kayak for three to six days over all types of terrain, usually far from medical assistance. Racing day and night over a 500 kilometre course they push themselves to the limits of their endurance – just for the thrill of competing. Under race rules all team members must complete all sections of the

course and they must never be more than 100 metres apart. Courses are inspired by the local terrain and kept secret up until hours before the start. Teams then receive their maps and race books pointing out the various checkpoints they must navigate to on their journey. David Leggo, 48, and Lucas Matthews, 42, last month won the all-male category of their race at Palm Cove, Queensland, called XPD Australia 2020 after the event was postponed last year due to COVID-19. About 35 teams competed, with five teams of four contesting the all-male category. Their “trophies” were rocks taken from the course with small plaques inlaid on them.

Leggo, married with two boys, is a civil engineer at Melbourne Water. He started competing in adventure racing in 2007 and has tackled various styles of events at least annually. His main role is to navigate the team around the course with a compass and maps. Matthews, married with three boys and a girl, is a manager at BOC Gases. He was “dragged” into adventure racing by Leggo a few years ago and has gone straight into competing in events. “We enjoy the challenge,” Leggo said. “Also, we get to go places where people normally wouldn’t be allowed, such as large cattle stations of hundreds of square kilometres with gorges and rivers … lots of cool places.”

The mind-numbing sensation of sleep deprivation is common in all the longer races. “I’ve done five big events over five-10 days over the time and the lack of sleep for days on end can cause you to hallucinate and become disoriented,” Leggo said. This was problematic as the teams must carefully navigate their own courses using maps, with the aim of choosing the most precise route, similar to orienteering. Leggo and Matthews train hard, often heading out at 4am to run along the cliffs at Mount Eliza and Mornington and finishing off with multiple laps of Moorooduc quarry reserve. They train for the mountain bike sections at Two Bays track and up steep

Ash eyes ‘next level’ in AFLW BELEURA Junior Football Club is celebrating its first AFLW signing. Under-18 Ash Richards was snapped up by St Kilda with pick 12 in the recent AFLW draft. The Saints had noted her versatility in the midfield and up forward, as well as her athleticism and ability to find the goals. Growing up as an avid Geelong supporter, Richards began at Beleura as a 13-year-old. Her football skills developed further each season, resulting in her being selected in inter-league, V/Line Cup, Dandenong Stingrays and Vic Country squads. This season she co-captained Dandenong Stingrays and, at the end of the girls’ NAB League season, was invited to play with Port Melbourne’s VFLW side. In the lead up to the draft she impressed recruiters in her four games with Port and three solid performances for Vic Country in the NAB AFLW National Championships. Juggling year 12 and footy commitments has been a challenge and Richards says she plans to take a gap year next year so she can focus purely on footy. “I’ve already noticed it’s another level up,” she said of settling into St Kilda. “VFL was next level to Stingrays and this is another level again. It’s hard, but it’ll be worth it. It’ll just help make me better.” Beleura was one of the first clubs on the Mornington Peninsula to field all-girls’ teams and the club continues to have a strong female footy program with players from under-10s through to under-18s, including several potential AFLW draftees. “We’re so proud that Ash started her footy at Beleura and has worked her way through to the big time, club president Aaron Brew said. “To us, she’ll always be a Beleura girl. We hope she can find the time to come down and run some drills with the younger girls. “To have an AFLW player picked from your club, that’s pretty inspiring for our young footballers.” Although the home and away season has only just finished, Beleura is already looking ahead to 2022. “We’ll be doing a bit in the off season as we know a lot of kids have missed out on a lot of footy through COVID,” Brew said. Anyone interested in playing at Beleura next season can get in touch via the club’s Facebook page or email president@beleurasports.com Stephen Taylor

bike trails at Red Hill and paddle their kayaks from the beach at Mount Eliza. To simulate race requirements, they load their packs with 20kg of weights. Leggo said most competitors were in the 40-50 age range because equipment, such as bikes and kayaks, could be expensive and time off for younger people was often hard to come by. When events finish they like to take a few days to recuperate. After driving to a race at Townsville while his family flew up, Leggo said they then spent three weeks driving home down the coast. Two other team members Jarrod Mitchell and Andy Turner live in the inner suburbs. They are all looking forward to their next challenge.

Energy advice A FREE webinar by Mornington Peninsula Shire Council will cover the benefits of hot water heat pumps and reverse cycle air conditioners. The shire says replacing a conventional electric hot water system with a hot water heat pump could save a typical family up to 70 per cent in running costs. Savings of up to 55 per cent could be made by replacing a gas storage hot water system. The webinar – 12pm-1pm, Thursday 19 August – complements the shire’s solar and energy bulk buy program offering discounts on appliances and free and tailored advice on products suitable for a range of homes and budgets. The aim is to make houses more energy efficient, comfortable and cost-effective to run. The webinar will give an overview of the council’s bulk buy program being run in conjunction with the Australian Energy Foundation and product supplier RMS Heating and Cooling. Register: mps-bulk-buy-hwhp-rcac.eventbrite.com.au or call the Australian Energy Foundation: 1300 236 855, or visit mornpen. vic.gov.au/bulkbuy or aef.com.au/mps-bulkbuy/

In the team: Beleura’s Ash Richards was picked up by St Kilda at the recent AFLW draft. Pictures: Supplied

CHICKENS make great pets as well as being good composters and providing eggs. To learn how to raise chooks a fun workshop by Chooktopia will cover their health, nutrition, housing, protection from predators and pests, as well as the sustainability and circular economy benefits of keeping them. The session will also cover local laws and guidelines for planning a productive chook yard. The workshop will be held at the Eco Living Display Centre, The Briars, 10.30am12pm, Saturday 2 October. The cost is $20 each. Visit mornpen.vic.gov.au/ecolivingworkshops to book a place. Other environment events are also listed. Details: Jacqui Salter at environmentaleducation@mornpen.vic.gov.au Mornington News