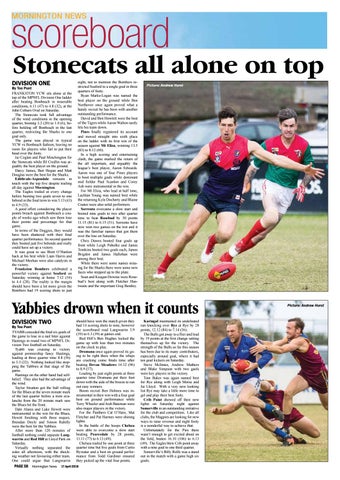 Stonecats all alone on top

By Toe Punt FRANKSTON YCW sits alone at the top of the MPNFL Division One ladder after beating Bonbeach in miserable conditions, 6.11 (47) to 4.8 (32), at the John Coburn Oval on Saturday. The Stonecats took full advantage of the wind conditions in the opening quarter, booting 3.2 (20) to 1.0 (6), before holding off Bonbeach in the last quarter, restricting the Sharks to one goal only. The game was played in typical YCW vs Bonbeach fashion, leaving no room for players who fail to put their head over the footy. Jai Coglan and Paul Minchington for the Stonecats while BJ Credlin was arguably the best player on the ground. Darcy James, Ben Hogan and Matt Douglas were the best for the Sharks. Edithvale-Aspendale remains in touch with the top five despite trailing all day against Mornington. The Eagles trailed at every change before booting two goals seven to one behind in the final term to win 5.13 (43) to 4.9 (33). A good effort considering the player points breach against Bonbeach a couple of weeks ago which saw them lose their points and percentage for that game. In terms of the Doggies, they would have been shattered with their final quarter performance. Its second quarter they booted just five behinds and really could have set up a victory. It was great to see Brett O’Hanlon back at his best while Liam Harris and Michael Meehan were also catalysts in the victory. Frankston Bombers celebrated a powerful victory against Seaford on Saturday winning at home 7.12 (54) to 4.4 (28). The reality is the margin should have been a lot more given the Bombers had 19 scoring shots to just

eight, not to mention the Bombers restricted Seaford to a single goal in three quarters of footy. Ryan Marks-Logan was named the best player on the ground while Ben Northover once again proved what a handy recruit he has been with another outstanding performance. David and Ben Howlett were the best of the Tigers while Aaron Walton rarely lets his team down. Pines finally registered its account and moved straight into sixth place on the ladder with its first win of the season against Mt Eliza, winning 13.5 (83) to 8.12 (60). In a high scoring and entertaining clash, the game marked the return of the all important, and arguably the league’s best player, Aaron Edwards. Aaron was one of four Pines players to boot multiple goals while dominant mid fielder Paul Scanlon and Corey Ash were instrumental in the win. For Mt Eliza, who lead at half time, Lachlan Young was named best while the returning Kyle Docherty and Blaine Coates were also solid performers. Sorrento overcame a slow start and booted nine goals to two after quarter time to beat Rosebud by 30 points 11.15 (81) to 6.15 (51). Sorrento have now won two games on the trot and it was the familiar names that got them over the line on Saturday. Chris Dawes booted four goals up front while Leigh Poholke and James Tomkins booted two goals each, James Brigden and James Hallohan were among their best. While there were some names missing for the Sharks there were some new faces who stepped up to the plate. Sean and Keegan Downie were Rosebud’s best along with Fletcher Hustwaite and the important Greg Bentley.

By Toe Punt TYABB conceded the final six goals of the game to lose in a nail biter against Hastings in round two of MPNFL Division Two football on Saturday. Tyabb was cruising to victory against premiership fancy Hastings, leading at three quarter time 8.8 (56) to 3.3 (22). Nothing looked like stopping the Yabbies at that stage of the game. Hastings on the other hand had selfbelief. They also had the advantage of the wind. Taylor Stratton got the ball rolling for the Blues at the seven minute mark of the last quarter before a mini avalanche from the 20 minute mark saw the Blues hit the front. Dale Alanis and Luke Hewitt were instrumental in the win for the Blues, Hewitt finishing with three majors. Brendan Doyle and Simon Rahilly were the best for the Yabbies. After more than 120 minutes of football nothing could separate Langwarrin and Red Hill at Lloyd Park on Saturday. Virtually nothing separated the sides all afternoon, with the shocking weather not favouring either team. One could argue that Langwarrin

should have won the match given they had 14 scoring shots to nine, however the scoreboard read Langwarrin 5.9 (39) to 6.3 (39) at games end. Red Hill’s Ben Hughes locked the game up with less than two minutes on the clock to play. Dromana once again proved its going to be right there when the whips are cracking come finals time after beating Devon Meadows 14.12 (96) to 8.9 (57). Leading by just eight points at three quarter time Dromana put their foot down with the aide of the breeze to run out easy winners. Boom recruit Ben Holmes was instrumental in their win with a four goal best on ground performance while Terry Wheeler and Josh Bateman were also major players in the victory. For the Panthers Cal O’Hare, Mat Fletcher and Pat Harmes were shining lights. In the battle of the hoops Chelsea were able to overcome a slow start beating Pearcedale by 28 points, 11.11 (77) to 6.13 (49). Chelsea trailed by one point at three quarter time but five goals from Curtis Bywater and a best on ground performance from Todd Gardiner ensured they picked up the vital four points.

Karingal maintained its undefeated run knocking over Rye at Rye by 28 points, 12.12 (84) to 7.14 (56). The Bulls got away to a flier and lead by 19 points at the first change setting themselves up for the victory. The strength of the Bulls so far this season has been due to its many contributors, especially around goal, where it had ten goal kickers on Saturday. Steve McInnes, Andrew Mathers and Blake Simpson with two gaols were key players in the victory. Tom Baker was again named best for Rye along with Leigh Morse and Jai Lloyd. With a very new looking list Rye may take a little more time to gel and play their best footy. Crib Point showed off their new lights on Saturday night against Somerville in an outstanding initiative for the club and competition. Like all clubs, the Magpies are looking for new ways to raise revenue and night footy is a wonderful way to achieve that. Unfortunately for the Pies there wasn’t enough to get excited about on the field, beaten 16.10 (106) to 6.13 (49). The Eagles blew Crib point away with a nine goal to one third quarter. Somerville’s Billy Rolfe was a stand out in the match with a game high six goals.