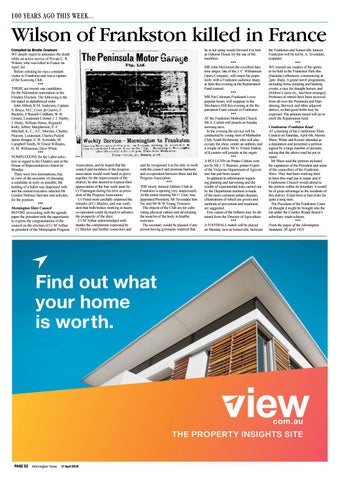 Compiled by Brodie Cowburn WE deeply regret to announce the death while on active service of Private C. R. Peninsula Wilson, who Motor was killed in France on Ltd. Pty, April 3rd. Before S-CO-FFEE enlisting he was a constant visitor to Frankston and was a captain MEOUSENCE of the Kooyong Club. *** like it; too.!!" i ~Yii a r THERE are twenty one candidates deliciou Cup of Cofuee for the NationalistAnomination in the at a Moment's Notice Flinders Election. The following is the Supper list stated in alphabetical order. or other John Abbott, R M. Captain So Anderson, Eoaily ab d the fabsolute S. isBruce, M.C, Croix de Guerre; by F. Buckley, F Russell Coldham, W. B. Grouse, Lieutenant Colonel J. J. Hanby, Your Grocer sells BROOKE'S I J. Henty, William Home, Reginald Kelly, Jeffrey Macpherson, E. F. Mitchell, K. C.; A C. Moreley, Charles Pearson. Lieutenant, Charles Pickett James Rouget, E. H. Symonds, M. to Frankston Weekly Service--Mornington Campbell Smith, W Ernest Williams, Murniugton One jl'days, arriving in iranketon p.m. Leaving 36 Tiain to Mornington to City, Returning H. M. Williamson, Dave White. from Melbourne. Train the: *** 6d. 3s; Return, Fares-Single, 4s NOMINATIONS for the Labor selecHire Timte--Night or Day. for at any tion in regard to the Flinders seat in the said he recognised it as his duty to work Association, and he hoped that the House of Representatives closed on Motor Accessories Powder Tyres, Petrol, Repais,: Stocked.. with theeffected. council and promote harmony council and members ofefficiently the progress Monday. and promptly Grant Cars. and co-operation between them and the association would work in glove Agentshand for Buick and There were two nominations, but, Work Given. i?:.::; in Motor Driving and Progress Mechanical Association. togetherLessons for the improvement of the in view of the necessity of choosing *** district; he also desired to express their a candidate as early as possible, the discomf'rt brought parableholding of tc THE newly formed Athletic Club at appreciation of the fine work done by a ballot was dispensed with 'of through Frankston is opening very auspiciously. Cr Flannagan during his term as presiand the central Mr indAl executive selected atising-froi --BTua At the initial meeting Mr C. Gray was dent of the Progress Association. Gordon Holmes,cffiuvia barrister and solicitor, disagreeable appointed President, Mr Tevendale hon. Cr Flood most cordially endorsed the for the position. s absolutely abolished in Builderand was confiand Contractor Sec and Mr W W Young Treasurer. remarks of Cr Blacker, *** hours by usirng The objects of the Club are for cultident that both bodies working in hearty FRANKSTON Mornington Shire Council STREET. BAYZ vating physical culture and developing co-operation could dp much to advance BEFORE proceeding with the agenda Powder 'Pedol.' that he has BEGS to shire. intimate the muscles of the body in healthyas the prosperity of the business, paper the president took the opportunity is with to exercises. Cr M’Arthur acknowledged Supply to express the congratulations of the above, 'Pedol'has er for Chilthanks the compliment expressed by The secretary would be pleased if any council on the election ofequal Cr M’Arthur a afing, as president and of Allthe Mornington Diseases person having gymnastic material that Cr Blacker and brotherLIME, councilors and CEMENT-PAINTS Progress BRICKS, AND AND OILS

he is not using would forward it to him at Osborne House for the use of the members. *** MR John McGowan the excellent baritone singer, late of the J. C. Williamson Opera Company, will renew his popularity with a Frankston audience sharp at 8pm this evening at the Repatriation Fund concert. *** MR Pat Coleman, Frankston’s ever popular basso, will reappear in the Mechanics Hill this evening at the Repatriation Fund concert in Frankston. *** AT the Frankston Methodist Church Mr A. Corlett will preach on Sunday morning next. In the evening the service will be conducted by young men of Methodist Club, South Richmond, who will also occupy the choir, render an anthem, and a couple of solos. Mr G. Ernest Tonkin, of Kyneton will preside at the organ. *** A BULLETIN on Potato Culture written by Mr J. T. Ramsey, potato Expert of the Victorian Department of Agriculture has just been issued. In addition to information regarding planting and harvesting and the results of experimental tests carried out by the Department mention is made of the more common potato diseases (illustrations of which are given) and methods of prevention and treatment are suggested. Free copies of the bulletin may be obtained from the Director of Agriculture. *** A FOOTBALL match will be played on Monday next at Somerville, between

the Frankston and Somerville Juniors. Frankston will be led by A. Tevendale, (captain) *** WE remind our readers of the sports to be held in the Frankston Park this (Saturday) afternoon, commencing at 2pm. sharp. A grand novel programme, including horse jumping and hunting events, a race for draught horses, and children’s races etc., has been arranged. Promises of entries have been received from all over the Peninsula and Dandenong, Berwick and other adjacent district, so that good fields may be expected. The amount raised will go to swell the Repatriation fund. *** Cranbourne Frankston Road AT a meeting of the Cranbourne Shire Council on Saturday, April 6th, Messrs Shaw, White and Korner attended as a deputation and presented a petition signed by a large number of persons, asking that the above road be put in repair. Mr Shaw said the petition included the signatures of the President and some of the councillors of the Frankston Shire. They had been working hard to have this road put in repair and if Cranbourne Council would attend to the portion within its boundary it would be of great advantage to the residents of this district. It had been in bad order for quite a long time. The President of the Frankston Council thought it might be brought into the list under the Country Roads Board’s subsidiary roads scheme. *** From the pages of the Mornington Standard, 20 April 1918