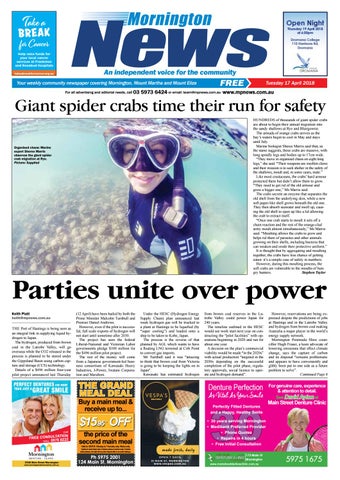 Giant spider crabs time their run for safety HUNDREDS of thousands of giant spider crabs are about to begin their annual migration into the sandy shallows at Rye and Blairgowrie. The armada of orange crabs arrives as the bay’s waters begin to cool in May and stays until July. Marine biologist Sheree Marris said that, as the name suggests, these crabs are massive, with long spindly legs and bodies up to 17cm wide. “They move in organised chaos on eight long legs,” she said. “Their weapons are swollen claws and their mission is to seek shelter in the safety of the shallows, moult and, in some cases, mate.” Like most crustaceans, the crabs’ hard armour protected them but didn’t allow them to grow. “They need to get rid of the old armour and grow a bigger one,” Ms Marris said. The crabs secrete an enzyme that separates the old shell from the underlying skin, while a new soft paper-like shell grows beneath the old one. They then absorb seawater and swell up, causing the old shell to open up like a lid allowing the crab to extract itself. “Once one crab starts to moult it sets off a chain reaction and the rest of the orange-clad army moult almost simultaneously,” Ms Marris said. “Moulting allows the crabs to grow and helps rid them of parasites and other animals growing on their shells, including bacteria that can weaken and erode their protective uniform.” It is thought that by aggregating and moulting together, the crabs have less chance of getting eaten: it’s a simple case of safety in numbers. However, during this moulting process, the soft crabs are vulnerable to the mouths of hungry hunters. Stephen Taylor

Parties unite over power Keith Platt keith@mpnews.com.au THE Port of Hastings is being seen as an integral link in supplying liquid hydrogen to Japan. The hydrogen, produced from brown coal in the Latrobe Valley, will go overseas while the CO2 released in the process is planned to be stored under the Gippsland Basin using carbon capture and storage (CCS) technology. Details of a $496 million four-year pilot project announced last Thursday

PERFECT DENTURES ARE MORE THAN JUST A

(12 April) have been hailed by both the Prime Minister Malcolm Turnbull and Premier Daniel Andrews. However, even if the pilot is successful, full scale exports of hydrogen will not start until sometime after 2030. The project has seen the federal Liberal-National and Victorian Labor governments pledge $100 million for the $496 million pilot project. The rest of the money will come from a Japanese government-led business consortium of Kawasaki Heavy Industries, J-Power, Iwatani Corporation and Marubeni.

Under the HESC (Hydrogen Energy Supply Chain) plan announced last week hydrogen gas will be trucked to a plant at Hastings to be liquefied (by “super cooling”) and loaded onto a ship to be taken to Kobe, Japan. The process is the reverse of that planned by AGL which wants to have a floating LNG terminal at Crib Point to convert gas imports. Mr Turnbull said it was “amazing to think that brown coal from Victoria is going to be keeping the lights on in Japan". Kawasaki has estimated hydrogen

the price of the second main meal Valid to 26/4/18. Monday to Thursday only. Bistro only.

from brown coal reserves in the Latrobe Valley could power Japan for 240 years. The timeline outlined in the HESC would see work start next year on constructing the “pilot facilities” with operations beginning in 2020 and run for about one year. A decision on the plan’s commercial viability would be made “in the 2020s” with actual production “targeted in the 2030s depending on the successful completion of the pilot phase, regulatory approvals, social licence to operate and hydrogen demand”.

However, reservations are being expressed despite the predictions of jobs at Hastings and in the Latrobe Valley and hydrogen from brown coal making Australia a major player in the world’s energy supply network. Mornington Peninsula Shire councillor Hugh Fraser, a keen advocate of lowering emissions that effect climate change, says the capture of carbon and its disposal “remains problematic and appears to have conveniently and glibly been put to one side as a future problem to solve”. Continued Page 6