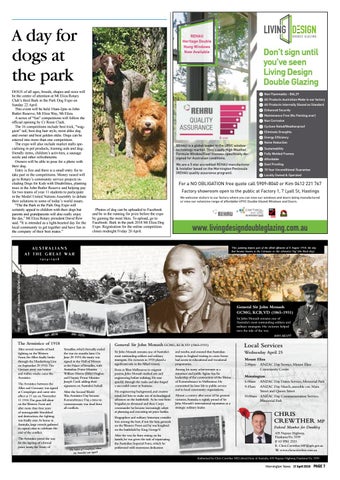 A day for dogs at the park DOGS of all ages, breeds, shapes and sizes will be the centre of attention at Mt Eliza Rotary Club’s third Bark in the Park Dog Expo on Sunday 22 April. This event will be held 10am-2pm in John Butler Reserve, Mt Eliza Way, Mt Eliza. A series of “fun” competitions will follow the official opening by Cr Rosie Clark. The 16 competitions include best trick, “waggiest” tail, best dog hair style, most alike dog and owner and best golden oldie. Dogs can be entered into more than one competition. The expo will also include market stalls specialising in pet products, training aids and dogfriendly items, children’s activities, a sausage sizzle and other refreshments. Owners will be able to pose for a photo with their dog. Entry is free and there is a small entry fee to take part in the competitions. Money raised will go to Rotary’s community service projects including Dogs for Kids with Disabilities, planting trees in the John Butler Reserve and helping pay for two teams of year 11 students to participate in the Model United Nations Assembly to debate their solutions to some of today’s world issues. “The the Bark in the Park Dog Expo will certainly appeal to children with their dogs but parents and grandparents will also really enjoy the day,” Mt Eliza Rotary president David Rew said. “It is intended as a light-hearted day for the local community to get together and have fun in the company of their best mates.”

Non Flammable - BAL29 All Products Australian Made in our factory white

REHAU is a global leader in the UPVC window technology market. They supply High Weather Formula Window/Door frames– specifically designed for Australian conditions. We are a 5 star accredited REHAU manufacturer & Installer based on the Mornington Peninsula (REHAU quality assurance program).

For a NO OBLIGATION free quote call 5909-8040 or Kim 0412 221 767 Factory showroom open to the public at Factory 1, 7 Lyall St, Hastings We welcome visitors to our factory where you can view our windows and doors being manufactured or view our extensive range of affordable UPVC Double Glazed Windows and Doors.

Photos of dog can be uploaded to Facebook and be in the running for prize before the expo by gaining the most likes. To upload, go to Facebook: Bark in the park 2018 Mt Eliza Dog Expo. Registration for the online competition closes midnight Friday 20 April.

This painting depicts part of the allied offensive of 8 August 1918, the day that became known to the Germans as ‘der schwartze Tag’ (the black day).

Sir John Monash remains one of Australia’s most outstanding soldiers and military strategists. His victories helped turn the tide of the war.

The Armistice between the Allies and Germany was signed at Compiègne and came into effect at 11 am on November 11 1918.The guns fell silent on the Western Front and after more than four years of unimaginable bloodshed and destruction, the fighting was finally over. At home in Australia, large crowds gathered in capital cities to celebrate the end of the conflict. The Armistice paved the way for the signing of a formal peace treaty, the Treaty of

e The Forest of Compiègne, wher the Armistice was signed

Sir John Monash remains one of Australia’s most outstanding soldiers and military strategists. His victories in 1918 played a significant role in the Allied victory.

and resolve, and ensured that Australian troops in England waiting to come home had access to educational and vocational programmes.

Born in West Melbourne to migrant parents, John Monash studied arts and engineering before enlisting. He rose quickly through the ranks and also forged a successful career in business.

Among his many achievements as a statesmen and public figure was his leadership of the construction of the Shrine of Remembrance in Melbourne. He committed his later life to public service and to local community organisations.

His engineering background, and creative mind, led him to make use of technological advances on the battlefield. As he rose from brigadier, to divisional and then Corps commander he became increasingly adept at planning and executing set piece battles.

After the Second World War, Armistice Day became Remembrance Day, a time to commemorate war dead from all conflicts.

After several months of hard fighting on the Western Front, the Allies finally broke through the Hindenburg Line on September 29 1918.The German army was beaten and within weeks came the Armistice.

Biographers and military historians consider him among the best, if not the best, generals on the Western Front and he was knighted on the battlefield by King George V. After the war, far from resting on his laurels, he was given the task of repatriating the Australian Imperial Force, which he performed with enormous dedication

Almost a century after some of his greatest victories, Australia is rightly proud of Sir John Monash’s international reputation as a strategic military leader.