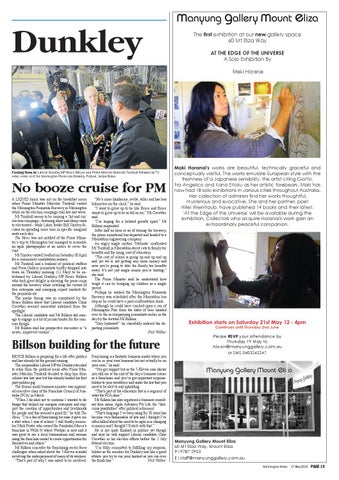 The Ă&#x20AC;UVW exhibition at our new gallery space 60 Mt Eliza Way AT THE EDGE OF THE UNIVERSE A Solo Exhibition By Maki Horanai

No booze cruise for PM A LIQUID lunch was not on the breakfast menu when Prime Minister Malcolm Turnbull visited the Mornington Peninsula Brewery in Mornington while on the election campaign trail late last week. Mr Turnbull seems to be running a â&#x20AC;&#x2DC;hit and runâ&#x20AC;&#x2122; election campaign - featuring short and sharp visits to electorates - while Labor leader Bill Shorten focuses on spending more time in specific marginal seats each day. The News was not notified of the Prime Ministerâ&#x20AC;&#x2122;s trip to Mornington but managed to scramble an agile photographer at no notice to cover the visit. Mr Shorten visited Seaford on Saturday 30 April for a community consultation session. Mr Turnbull and a busload of political staffers and Press Gallery journalists briefly dropped into town on Thursday morning (12 May) to be entertained by Liberal Dunkley MP Bruce Billson who took great delight in showing the press corps around the brewery while extolling the virtues of free enterprise and emerging export markets for the peninsula ale. The media throng was so enraptured by the Bruce Billson show that Liberal candidate Chris Crewther seemed somewhat sidelined from the spotlight. The Liberal candidate and Mr Billson did manage to engage in a bit of jocular banter for the cameras though. Mr Billson said his prospective successor is â&#x20AC;&#x153;a newer, improved versionâ&#x20AC;?.

Billson building for the future BRUCE Billson is preparing for a life after politics and has already hit the ground running. The irrepressible Liberal MP for Dunkley decided to retire from the political scene after Prime Minister Malcolm Turnbull decided to drop him from cabinet late last year but has already landed his first post-politics gig. The former small business minister was appointed executive chair of the Franchise Council of Australia (FCA) in March. â&#x20AC;&#x153;When I decided not to continue I wanted to do things that helped me energise enterprise and support the creation of opportunities and livelihoods for people and this seemed a good fit,â&#x20AC;? he told The News. â&#x20AC;&#x153;Iâ&#x20AC;&#x2122;m a fan of franchising because it gave me a start when I was at school. I still fondly remember Mark Foster who owned the Frankston Maccaâ&#x20AC;&#x2122;s franchise in Wells St where Westpac is now and it was great to see a local businessman and woman using the franchise model to create opportunities for themselves and others.â&#x20AC;? Mr Billson concedes the franchising sector faces challenges when asked about the 7-Eleven scandal involving the underpayment of many of its workers. â&#x20AC;&#x153;Thatâ&#x20AC;&#x2122;s part of why I was asked to be involved.

0DNL +RUDQDL V works are beautiful, technically graceful and conceptually wistful. The works emulate European style with the freshness of a Japanese sensibility, the artist citing Giotto, Fra Angelico and Kano Eitoku as her artistic forebears. Maki has now had 18 solo exhibitions in various cities throughout Australia. +HUFROOHFWLRQRIDGPLUHUVĂ&#x20AC;QGKHUZRUNVWKRXJKWIXO mysterious and evocative. She and her partner, poet Hillel Weintraub, have published 14 books and their latest, 'At the Edge of the Universe' will be available during the exhibition. Collectors who acquire Horanai's work gain an extraordinary peaceful companion.

Please RSVP your attendance by Thursday 19 May to AliceH@manyunggallery.com.au or SMS 0403242247