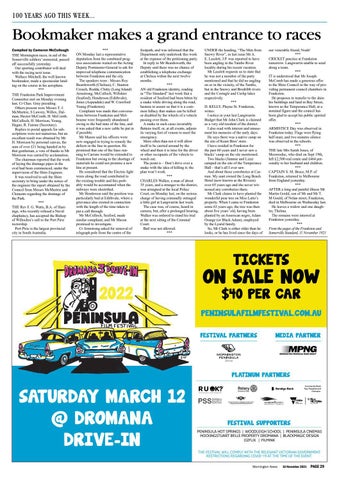 Bookmaker makes a grand entrance to races Compiled by Cameron McCullough THE Mornington races, in aid of the Somerville soldiers’ memorial, passed off successfully yesterday. Our sporting contributor will deal with the racing next issue. Wallace Mitchell, the well known bookmaker, made a spectacular landing on the course in his aeroplane. *** THE Frankston Park Improvement Committee met on Monday evening last, Cr Chas. Gray presiding. Others present were Messrs T. J. McMurtrie, S Lawrey, Willox, Dalman, Hector McComb, H. McComb, McCulloch, H. Morrison, Young, Hague, R. Fairnie (Secretary). Replies to postal appeals for subscriptions were not numerous, but an excellent result was obtained by Mr H. Morrison by personal canvas, the sum of over £11 being handed in by that gentleman, a vote of thanks to Mr Morrison was carried by acclamation. The chairman reported that the work of laying the drainage pipes in the oval had been commenced, under the supervision of the Shire Engineer. It was resolved to ask the Shire secretary to bring under the notice of the engineer the report obtained by the Council from Messrs McMurtrie and Clements regarding the drainage of the Park. *** THE Rev F. G. Watts, B.A. of Hastings, who recently refused a Naval chaplaincy, has accepted the Bishop of Willochra’s call to the Port Pirie rectorship. Port Pirie is the largest provincial city in South Australia.

*** ON Monday last a representative deputation from the combined progress associations waited on the Acting Deputy Postmaster-General to ask for improved telephone communication between Frankston and the city. The speakers were : Messrs Roy Beardsworth (Chelsea), C. Stanton Crouch, Rodda, Chitty (Long Island) Armstrong, McCulloch, Wiltshire (Seaford), Henderson (Edithvale), Jones (Aspendale) and W. Crawford Young (Frankston). Complaint was made that conversations between Frankston and Melbourne were frequently abandoned owing to the bad state of the line, and it was asked that a new cable be put in if possible. Mr Mason said his officers were now engaged in trying to remedy the defects in the line in question. He promised that one of the lines running to Carrum would be extended to Frankston but owing to the shortage of materials he could not promise a new line at present. He considered that the Electric light wires along the road contributed to the existing trouble and this probably would be accentuated when the railways were electrified. Mr Henderson said the position was particularly bad at Edithvale, where a grievance also existed in connection with the length of the time taken to put a call through. Mr McCulloch, Seaford, made similar complaint, and Mr Mason promised to investigate. Cr Armstrong asked for removal of telegraph pole from the centre of the

footpath, and was informed that the Department only undertook this work at the expense of the petitioning party. In reply to Mr Beardsworth, the Deputy said there was no chance of establishing a telephone exchange at Chelsea within the next twelve months. *** AN old Frankston identity, reading in “The Standard” last week that a resident of Seaford had been bitten by a snake while driving along the road, hastens to assure us that it is a common fallacy that snakes can be killed or disabled by the wheels of a vehicle passing over them. A snake in such cases invariably flattens itself, or, at all events, adjusts its varying feet of venom to meet the emergency. More often than not it will allow itself to be carried around by the wheel and then it is time for the driver or other occupants of the vehicle to watch out. The point is – Don’t drive over a snake with the idea of killing it; the plan won’t work. *** CHARLES Walker, a man of about 35 years, and a stranger to the district, was arraigned at the local Police Court, on Monday last, on the serious charge of having criminally outraged a little girl at Langwarrin last week. The case was, of course, heard in camera, but, after a prolonged hearing, Walker was ordered to stand his trial at the next sitting of the Criminal Court. Bail was not allowed. ***

UNDER the heading, “The Men from Snowy River”, in last issue Mr A. E. Lasslett, J.P. was reported to have been angling in the Tambo River locality during his recent vacation. Mr Lasslett requests us to state that he was not a member of the party mentioned and that he did no angling on or in the vicinity, of the Tambo, but in the Snowy and Brodribb rivers and the Coringle and Curlip lakes respectively. *** D. KELLY, Playne St. Frankston, writes: I notice in your last Langwarrin Budget that Mr John Clark is claimed as a very old resident of the district. I also read with interest and amusement his memoirs of the early days. He says there was a native camp on the site of Keast Bros’ store. I have resided in Frankston for the past 60 years and I never saw a blacks’ camp on the site mentioned. Two blacks (Jimmie and Liza) camped on the site of the Temperance Hall – that’s all I ever saw. And about those corroberies at Carrum. My aunt owned the Long Beach Hotel (now known as the Riviera) over 65 years ago and she never witnessed any corroberies there. Mr Clark claims to have planted the wonderful pear tree on Miss Latto’s property. When I came to Frankston some 63 years ago, the tree was then about five years’ old, having been planted by an American negro, Adam Orange (or Black Adam), employed by the Lyarid family. So, Mr Clark is either older than he looks, or he has lived since the days of

our venerable friend, Noah! *** CRICKET practise at Frankston tomorrow. Langwarrin unable to send along a team. *** IT is understood that Mr Joseph McComb has made a generous offer to the Shire Council in the way of providing permanent council chambers in Frankston. He proposes to transfer to the shire his buildings and land in Bay Street, known as the Temperance Hall, at a nominal figure and the council has been glad to accept his public spirited offer. *** ARMISTICE Day was observed in Frankston today. Flags were flying half mast, and two minutes silence was observed in the schools. *** THE late Mrs Sarah Jones, of Moorooduc, who died on Sept 19th, left £2,500 real estate and £464 personalty to her husband and children. *** CAPTAIN S. M. Bruce, M.P. of Frankston, returned to Melbourne from England yesterday. *** AFTER a long and painful illness Mr Martin Gould, son of Mr and Mr T. M Gould, of Nolan street, Frankston, died in Melbourne on Wednesday last. He leaves a widow and one daughter, Thelma. The remains were interred at Frankston yesterday. *** From the pages of the Frankston and Somerville Standard, 11 November 1921