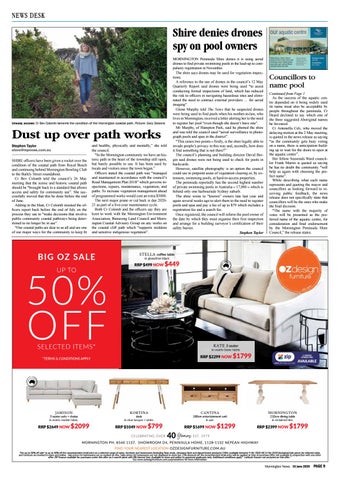 Dust up over path works Stephen Taylor steve@mpnews.com.au SHIRE officers have been given a rocket over the condition of the coastal path from Royal Beach and continuing behind Mornington Bowling Club to the Barkly Street roundabout. Cr Bev Colomb told the council’s 26 May meeting that the scenic and historic coastal path should be “brought back to a standard that allows access and safety for community use”. She successfully moved that this be done before the end of June. Adding to the blast, Cr Colomb insisted the officers report back before the end of July on the process they use to “make decisions that involve public community coastal pathways being determined to no longer be in use”. “Our coastal paths are dear to us all and are one of our major ways for the community to keep fit

and healthy, physically and mentally,” she told the council. “In the Mornington community we have an historic path in the heart of the township still open, but barely possible to use. It has been used by locals and visitors since the town began.” Officers stated the coastal path was “managed and maintained in accordance with the council’s Road Management Plan 2018” which governs inspections, repairs, maintenance, vegetation, and paths. To increase vegetation management ahead of programmed works would cost an extra $5000. The next major prune or cut back is due 202021 as part of a five-year maintenance cycle. Both Cr Colomb and the officers say they are keen to work with the Mornington Environment Association, Bunurong Land Council and Mornington Coastal Advisory Group on any works on the coastal cliff path which “supports middens and sensitive indigenous vegetation”.

Continued from Page 1 As the success of the aquatic centre depended on it being widely used its name must also be acceptable by people throughout the peninsula. Cr Heard declined to say which one of the three suggested Aboriginal names he favoured. Cr Antonella Celi, who moved the delaying motion at the 2 May meeting, is quoted in the news release as saying “as the community gets busy voting on a name, there is anticipation building up in wait for the doors to open at the aquatic centre”. Her fellow Seawinds Ward councillor Frank Martin is quoted as saying he has no doubt the community “will help us again with choosing the perfect name”. While describing what each name represents and quoting the mayor and councillors as looking forward to receiving public feedback, the news release does not specifically state that councillors will be the ones who make the final decision. “The name with the majority of votes will be presented as the preferred name of the aquatic centre, for consideration and final endorsement by the Mornington Peninsula Shire Council,” the release states.

MORNINGTON Peninsula Shire denies it is using aerial drones to find private swimming pools in the lead-up to compulsory registration in November. The shire says drones may be used for vegetation inspections. A reference to the use of drones in the council’s 12 May Quarterly Report said drones were being used “to assist conducting formal inspections of land, which has reduced the risk to officers in navigating hazardous sites and eliminated the need to contract external providers … for aerial imaging”. Glenn Murphy told The News that he suspected drones were being used to find pools when his mother-in-law, who lives in Mornington, received a letter alerting her to the need to register her pool “even though she doesn’t have one”. Mr Murphy, of Hampton Park, said he phoned the shire and was told the council used “aerial surveillance to photograph pools and spas in the district”. “This raises two points – firstly, is the shire legally able to invade people’s privacy in this way and, secondly, how does it find something that is not there?” The council’s planning and building director David Bergin said drones were not being used to check for pools in backyards. However, satellite photography is an option the council could use to pinpoint areas of vegetation clearing or, by extension, swimming pools, at hard-to-access properties. The peninsula reportedly has the second highest number of private swimming pools in Australia – 17,000 – which is behind only one harbourside Sydney suburb. The shire wrote to “known” owners late last year and again several weeks ago to alert them to the need to register pools and spas and pay a fee of up to $79 which includes a registration fee and a search fee. Once registered, the council will inform the pool owner of the date by which they must organise their first inspection and arrange for a building surveyor’s certification of their safety barrier. Stephen Taylor

MORNINGTON PH: 8560 1137, SHOWROOM D4, PENINSULA HOME, 1128-1132 NEPEAN HIGHWAY FIND YOUR NEAREST LOCATION OZDESIGNFURNITURE.COM.AU The up to 50% off sale* is up to 50% off the recommended retail price on a selected range of sofas, furniture and homewares (including floor stock, clearance lines and discontinued products.) Offer available between 9-06-2020 till 22-06-2020 (inclusive).Sale prices for selected sofas and furniture are marked in-store and online. Sale prices for homewares are as marked on-line. Sales prices for homewares are not displayed in-store but 25% discount off the recommended retail price will be applied at time of purchase.Offer not available in conjunction with any other offer. ZIP finance available for purchases under this offer on 6 month plans with 0% interest free. Available in-store and online to approved applicants only. Additional conditions apply*. Latitude finance not accepted on this offer. * See www.ozdesignfurniture.com.au/promotions for more information.