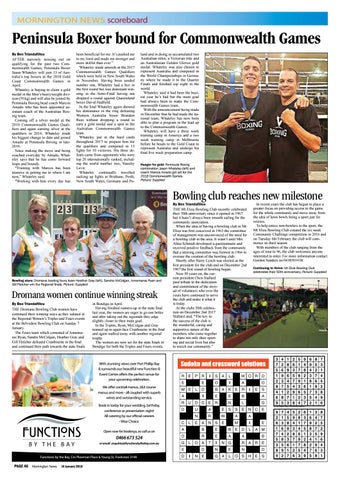 Peninsula Boxer bound for Commonwealth Games By Ben Triandafillou AFTER narrowly missing out on qualifying for the past two Commonwealth Games, Peninsula Boxer Jason Whateley will join 13 of Australia’s top boxers at the 2018 Gold Coast Commonwealth Games in April. Whateley is hoping to claim a gold medal in the Men’s heavyweight division (91kg) and will also be joined by Peninsula Boxing head coach Marcos Amado who has been appointed assistant coach of the Australian Boxing team. Coming off a silver medal at the 2010 Commonwealth Games Qualifiers and again earning silver at the qualifiers in 2014, Whateley made his biggest change to date and joined Amado at Peninsula Boxing in late2016. Since making the move and being coached everyday by Amado, Whateley says that he has come forward leaps and bounds. “Training with Marcos has been massive in getting me to where I am now,” Whateley said. “Working with him every day has

been beneficial for me. It’s pushed me to my limit and made me stronger and more skilful than ever.” Whateley made amends at the 2017 Commonwealth Games Qualifiers which were held in New South Wales in November. Having been seeded number one, Whateley had a bye in the first round but was dominant winning in the Semi-Final having not dropped a round against Queensland boxer David Hadfield. In the final Whateley again showed his dominance in the ring defeating Western Australia boxer Brandon Rees without dropping a round to earn a gold medal and a spot in the Australian Commonwealth Games team. Whateley put in the hard yards throughout 2017 to prepare him for the qualifiers and competed in 13 fights for 10 victories. His three defeats came from opponents who were top 20 internationally ranked, including the world number two, Vassiliy Levit. Whateley continually travelled racking up fights in Brisbane, Perth, New South Wales, Germany and Po-

land and in doing so accumulated two Australian titles, a Victorian title and an Australasian Golden Gloves gold medal. Whateley was also chosen to represent Australia and competed in the World Championships in Germany where he made it to the Quarter Finals and finished top eight in the world. Whateley said it had been the busiest year he’s had but the main goal had always been to make the Commonwealth Games team. With the announcement being made in December that he had made the national team, Whateley has now been able to plan a program in the lead up to the Commonwealth Games. Whateley will have a three week training camp in America and a two week training camp in Melbourne before he heads to the Gold Coast to represent Australia and undergo his final five week preparation camp. Hunger for gold: Peninsula Boxing combination Jason Whateley (left) and coach Marcos Amado get set for the 2018 Commonwealth Games. Picture: Supplied

Dromana women continue winning streak By Ben Triandafillou THE Dromana Bowling Club women have continued their winning ways as they saluted in the Regional Women’s Triples and Fours events at the Belvedere Bowling Club on Sunday 7 January. The Fours team which consisted of Annemaree Ryan, Sandra McColgan, Heather Gray and Gill Fletcher defeated Cranbourne in the final and continued their path towards the state finals

in Bendigo in April. Having finished runners-up in the state final last year, the women are eager to go one better and after taking out the regionals they edge slightly closer to their main goal. In the Triples, Ryan, McColgan and Gray teamed up to again face Cranbourne in the final and again walked away with another regional trophy. The women are now set for the state finals in Bendigo for both the Triples and Fours events.

By Ben Triandafillou THE Mt Eliza Bowling Club recently celebrated their 50th anniversary since it opened in 1967 but it hasn’t always been smooth sailing for the community association. When the idea of having a bowling club in Mt Eliza was first conceived in 1963 the committee of management was unconvinced of the need for a bowling club in the area. It wasn’t until Mrs Alma Schmidt developed a questionnaire and received positive feedback from the community that a steering committee was formed in 1966 to oversee the creation of the bowling club. Shortly after Harry Lynch was elected as the first president for the club and on December 2nd 1967 the first round of bowling began. Now 50 years on, the current president Chris Stallard paid tribute to the dedication and commitment of the myriad of volunteers who over the years have continued to serve the club and make it what it is today. At the clubs 50th celebration on December 2nd 2017 Stallard said, “The key to the success of the club is the wonderful, caring and supportive nature of the members who come together to share not only their sporting and social lives but also to enrich our community.”

In recent years the club has begun to place a greater focus on providing access to the game for the whole community and move away from the idea of lawn bowls being a sport just for retirees. To help entice non-bowlers to the sport, the Mt Eliza Bowling Club created the six week Community Challenge competition in 2016 and on Tuesday 6th February the club will commence its third season. With members of the club ranging from the ages of nine to 96, the club welcomes anyone interested to enter. For more information contact Gordon Sanders on 0438501438.