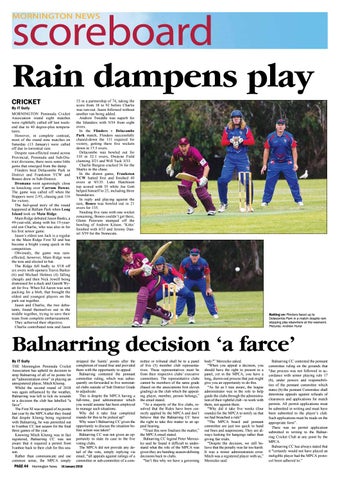 By IT Gully MORNINGTON Peninsula Cricket Association round eight matches were rightfully called off last weekend due to 40 degree-plus temperatures. However, in complete contrast, most of the round nine matches on Saturday (13 January) were called off due to torrential rain. Despite rain-effected round across Provincial, Peninsula and Sub-District divisions, there were some little gems that emerged from the damp. Flinders beat Delacombe Park in District and Frankston YCW and Boneo drew in Sub-District. Dromana went agonisingly close to knocking over Carrum Downs. The game was called off when the Hoppers were 2-93, chasing just 116 for victory. The feel-good story of the round happened at Ballam Park when Long Island took on Main Ridge. Main Ridge debuted Jason Banks, a 49-year-old, along with his 15-yearold son Charlie, who was also in for his first senior game. Jason’s eldest son Jack is a regular in the Main Ridge First XI and has become a bright young quick in the competition. Obviously, the game was raineffected, however, Main Ridge won the toss and elected to bat. The Ridge fell badly to 5/18 off six overs with openers Travis Barker (6) and Michael Holmes (4) falling cheaply and then Nick Jewell being dismissed for a duck and Gareth Wyatt for five. When Ed Aaron was sent packing for a blob, that brought the oldest and youngest players on the park out together. Jason and Charlie, the two debutants, found themselves out in the middle together, trying to save their team from complete embarrassment. They achieved their objective. Charlie contributed nine and Jason

53 in a partnership of 74, taking the score from 18 to 92 before Charlie was run-out. Jason followed without another run being added. Andrew Tweddle was superb for the Islanders with 5/34 from eight overs. In the Flinders v Delacombe Park match, Flinders successfully chased-down the 111 required for victory, getting there five wickets down in 17.5 overs. Delacombe was bowled out for 110 in 32.1 overs, Dwayne Field claiming 3/21 and Will Tuck 3/33. Charlie Burgess cracked 56 for the Sharks in the chase. In the drawn game, Frankston YCW batted first and finished 40 overs at 9/135. Luke Hutchison top scored with 35 while Joe Gott helped himself to 25, including three boundaries. In reply and playing against the rain, Boneo was bowled out in 21 overs for 135. Needing five runs with one wicket remaining, Boneo couldn’t get there, Glenn Peterson stumped off the bowling of Andrew Kitson. ‘Kitto’ finished with 4/35 and Jeremy Daniel 3/39 for the Stonecats.

Batting on: Flinders faced up to Delacombe Park in a match despite rain stopping play elsewhere at the weekend. Pictures: Andrew Hurst

Balnarring decision ‘a farce’ By IT Gully THE Mornington Peninsula Cricket Association has upheld its decision to strip Balnarring of all of its points for an “administration error” in playing an unregistered player, Mitch Klienig. Whilst the second round of 2018 was again influenced by the weather, Balnarring was left to lick its wounds in a decision the club has labelled “a farce”. The First XI was stripped of its points last year by the MPCA after they found that despite Klienig being registered with Balnarring, he was permitted out to Ivanhoe CC last season for the final three games of the year. Knowing Mitch Klienig was in fact registered, Balnarring CC was not aware that it required a permit from Ivanhoe back to their club for this season. Rather than communicate and use common sense, the MPCA simply

stripped the Saints’ points after the completion of round four and provided them with the opportunity to appeal. Balnarring contested the pennant committee ruling, which was subsequently on-forwarded to five nominated clubs outside of Sub District Grade to adjudicate. This is despite the MPCA having a full-time, paid administrator which you would assume has been employed to manage such situations. Why did it take four completed rounds for this to be picked up? Why wasn’t Balnarring CC given the opportunity to discuss the situation before action was taken? Balnarring CC was not given an opportunity to state its case to the five voting clubs. The MPCA did not provide any detail of the vote, simply replying via email, “all appeals against rulings of a committee or sub-committee of a com-

mittee or tribunal shall be to a panel of five (5) member club representatives. These representatives must be from their respective clubs’ executive committees. The representative clubs cannot be members of the same grade (based on the associations first eleven grading) as the club which the appealing player, member, person belongs,” the email stated. “As a majority of the five clubs, resolved that the Rules have been correctly applied by the MPCA and don’t believe that the Balnarring CC have the right to take this matter to an appeal hearing. “Trust this now finalises the matter,” the MPCA email stated. Balnarring CC legend Peter Mereszko said he found it difficult to understand what the role of the MPCA was given they are handing season-defining decisions back to clubs. “Isn’t this why we have a governing

body?” Mereszko asked. “When you appeal a decision, you should have the right to present to a panel, yet in the MPCA, you have a long, drawn-out process that just might give you an opportunity to do this. “As far as I was aware, the league administrator was in the role to help guide the clubs through the administration of their rightful club - to work with them, not against them. “Why did it take five weeks (four rounds) for the MPCA to notify us that we had breached a rule? “The MPCA board and pennant committee are just too quick to hand out fines and suspensions. They are always looking for hangings rather than giving fair trials. “Despite the decision, we still believe that the penalty was far too harsh. It was a minor administration error. Mitch was a registered player with us,” Mereszko said.

Balnarring CC contested the pennant committee ruling on the grounds that “due process was not followed in accordance with senior playing rule 17 (b), under powers and responsibilities of the pennant committee which states (b) the pennant Committee shall determine appeals against refusals of clearances and applications for match permits. All permit applications must be submitted in writing and must have been submitted to the player’s club. Such applications must be made on the appropriate form”. There was no permit application submitted in writing to the Balnarring Cricket Club at any point by the MPCA. Balnarring CC has always stated that it “certainly would not have played an ineligible player had the MPCA protocol been adhered to.”