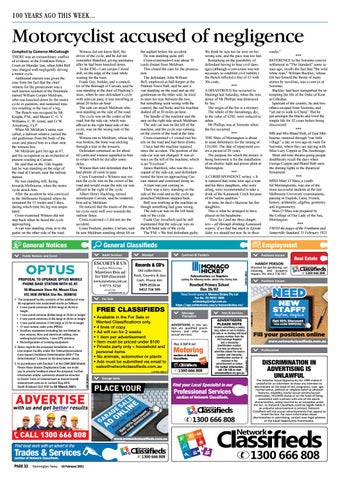 the asphalt before the accident. He was standing quite still. Cross-examined—I was about 70 yards distant from Meldrum. This closed the case for the prosecution. The defendant, John William Bell, employed as hall-keeper at the Prahran Town Hall, said he saw a van standing on the road and an old gentleman on the other side; he tried to steer his way between the two, but something went wrong with the control, the rod broke and his machine dashed off at 50 miles an hour. The handle of the machine and the step on the right side struck Meldrum. The side car was on the left of the machine, and the cycle was running on the crown of the road at the time. Cross-examined – I visited two hotels on the road and had three drinks. I have had the machine repaired since the accident. The position of the side-car was not changed. It was always on the left of the machine, which is an “Excelsior”. James Bamford, who was the occupant of the side-car, said defendant tooted the horn on approaching Carrum station and continued doing so. A train was just coming in. There was a lorry standing on the side of the road and as the cycle approached Meldrum stepped back. Bell was working at the machine as though something had gone wrong. The side-car was on the left hand side of the cycle. Frank Guy (recalled) said he still maintained that the side-car was on the left hand side of the cycle. The P.M. – We find defendant guilty.

Witness did not know Bell, the driver of the cycle, and he did not remember Bamford, giving assistance after he had been knocked down. To the P.M.– I am certain I stood still, on the edge of the road while waiting for the train. Frank Guy, builder, and a councillor of the Borough of Carrum, said he was standing at the door of Hacking’s store, when he saw defendant’s cycle with side-car pass; it was travelling at about 20 miles an hour. The side car struck Meldrum who was standing on the side of the road. The cycle was on the centre of the road, but the side car, which was affixed to the right hand side of the cycle, was on the wrong side of the road. Witness ran to Meldrum, whose leg was broken, the bone was sticking through a tear in the trousers. Defendant continued on for about 60 yards and witness signalled to him to return which he did after some delay. Witness then told defendant that he had plenty of room to pass. Cross Examined – Witness was certain the cycle was on the crown of the road and would swear the side car was affixed to the right of the cycle. Albert Henry Hackling, retired storekeeper Carrum, said he rendered first aid to Meldrum. He noticed that the tracks of the motor cycle went well over towards the railway fence. Cross examined – I did not see the accident. Louis Poulson, painter, Carrum, said he saw Meldrum standing about 3ft on

We think he was too far over on his wrong side, and the pace was too fast. Remarking on the possibility of defendant having to bear civil damages (although a conviction was not necessary to establish civil liability) the Bench inflicted a fine of £3 with 30s costs. *** A DISASTROUS fire occurred in Hastings last Saturday, when the residence of Mr Phillips was destroyed by fire. The origin of the fire is a mystery. The whole of the furnishings, &c, to the value of £200, were reduced to ashes. Mr Phillips was at Sorrento when the fire occurred. *** THE Shire of Mornington is about to issue debentures for the raising of £10,000. The date of repayment covers a period of 20 years. The purpose for which the money is being borrowed is for the installation of an electric light and power plant at Mornington. *** A CORRESPONDENT writes: – It is rumored that some time ago a man and his three daughters, who were ailing, were recommended to take a drink of the Kananook Creek because of its “saline qualities.” In time, he died – likewise his fair daughters. This is what he arranged to have placed on his headstone: “Here lie I and my three daughters – all through drinking Kananook waters; if we had but stuck to Epsom Salts, we should not now be in these

FREE CLASSIFIEDS • Available in the For Sale or Wanted Classiﬁcations only. • 4 lines of copy • Ad will run for 2 weeks • 1 item per advertisement • Item must be priced under $100 • Private party only – household and personal items • No animals, automotive or plants • Ads must be submitted via email to sales@networkclassiﬁeds.com.au

Find your Local Specialist in our

3. In accordance with Section 7 of the C564:2020 Mobile Phone Base Station Deployment Code, we invite you to provide feedback about the proposal. Further information and/or comments should be directed to Daniel Trees of Visionstream at daniel.trees@ visionstream.com.au or Locked Bag 2015, South Brisbane QLD 4101 by 02 March 2021.

*** REFERENCE to the Sorrento convict settlement in “The Standard” some issues ago, recalls the fact that “the wild white man,” William Buckley, whose life has formed the theme of many stories by novelists, was a convict at Sorrento. Buckley had been transported for attempting the life of the Duke of Kent at Gibraltar. Ignorant of the country, he and two others escaped from Sorrento, and “set out to walk to China”. But he got amongst the blacks and lived the simple life for 32 years before being discovered! *** MR and Mrs Bland Holt, of East Melbourne, motored through “our little village” a day or two ago en route for Sorrento, where they are staying with Miss Lucy Coppin at The Anchorage. Most old-time theatre-going people doubtlessly recall the days when George Coppin and Bland Holt were the shining lights in the theatrical firmament. *** MISS Mary O’Shea, a youthful Morningtonite, was one of the most successful students at the last Melbourne University examinations, passing in English, Latin, French, history, arithmetic, algebra, geometry and trigonometry. Miss O’Shea was prepared by the College of Our Lady of the Sea, Mornington. *** FROM the pages of the Frankston and Somerville Standard, 11 February 1921

Records & CD's PROPOSAL TO UPGRADE OPTUS MOBILE PHONE BASE STATION WITH 5G AT:

Compiled by Cameron McCullough THERE was an extraordinary conflict of evidence in the Frankston Police Court on Monday last, when John Bell was charged with negligently driving a motor cycle. Additional interest was given the case from the fact that the chief witness for the prosecution was a well known resident of the Peninsula named William Cooper Meldrum, who was knocked down by the motor cycle in question, and sustained injuries resulting in the loss of a leg. The Bench was occupied by Mr. Knight, P.M., and Messrs C. G. V. Williams, C. W. Grant, and Cr W. Armstrong, J’s.P. When Mr Meldrum’s name was called, a stalwart relative carried the old gentleman from the body of the court and placed him in a chair near the witness box. Mr Meldrum gave his age as 67, and his occupation as an orchardist at present residing at Carrum. He said that on the 12th August last he was standing on the edge of the road at Carrum, near the railway station. He was standing still, facing towards Melbourne, when the motor cycle struck him. After the accident he was conveyed to the Melbourne Hospital where he remained for 15 weeks and 3 days, during which time his leg was amputated. Cross-examined Witness did not step back when he heard the cycle approaching. A van was standing close in to the gutter on the other side of the road.

DISCRIMINATION IN ADVERTISING IS UNLAWFUL

The Victorian Equal Opportunity Act 1995 makes it unlawful for an advertiser to show any intention to discriminate on the basis of sex, pregnancy, race, age, marital status, political or religious belief or physical features, disability, lawful sexual activity/sexual orientation, HIV/AIDS status or on the basis of being associated with a person with one of the above characteristics, unless covered by an exception under the Act. As Network Classifieds could be legally liable if an unlawful advertisement is printed, Network Classifieds will not accept advertisements that appear to break the law. For more information about discrimination in advertising, contact your legal advisers or the Equal Opportunity Commission.