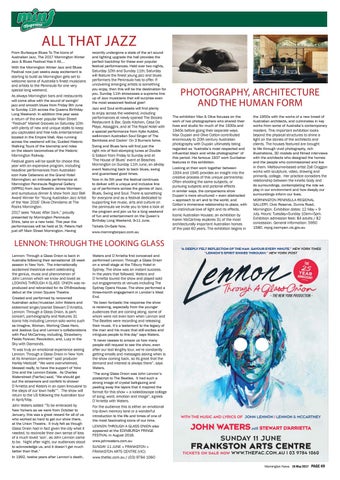 From Burlesque Blues To The Icons of Australian Jazz, The 2017 Mornington Winter Jazz & Blues Festival Has It All…. With the Mornington Winter Jazz and Blues Festival now just weeks away excitement is starting to build as Mornington gets set to welcome some of Australia’s finest musicians and artists to the Peninsula for one very special long weekend. As always Mornington bars and restaurants will come alive with the sound of swingin’ jazz and smooth blues from Friday 9th June to Sunday 11th across the Queens Birthday Long Weekend. In addition this year sees a return of the ever popular Main Street “Festival” Market Grooves on Saturday 10th with plenty of new and unique stalls to keep you captivated and free kids entertainment located in the Empire Mall. Also running across the weekend will be, Guided Historic Walking Tours of the township and rides on the steam locomotives of the Historic Mornington Railway. Festival goers will be spoilt for choice this year with an expansive program, including headline performances from Australian icon Kate Ceberano at the Grand Hotel Mornington; an intimate performance at Mornington Peninsula Regional Gallery (MPRG) from Jazz Baestro James Morrison; and sumptuous dinner & show from Jazz Bell Award Winner for ‘Young Australian Jazz Artist of the Year 2016’ Olivia Chindamo at The Rocks Mornington. 2017 sees “Music After Dark,” proudly presented by Mornington Peninsula Shire, take on a new twist. This year the performances will be held at St. Peters Hall just off Main Street Mornington. Having

recently undergone a state of the art sound and lighting upgrade the hall provides the perfect backdrop for these ever popular festival performances. Held over two nights, Saturday 10th and Sunday 11th; Saturday will feature the finest young jazz and blues performers the Peninsula has to offer. If uncovering emerging artists is something you enjoy, then this will be the destination for you. Sunday 11th showcases a supreme line up of Jazz musicians that will surprise even the most seasoned festival goer! Jazz and Soul enthusiasts will find plenty to enjoy across the weekend, including performances at newly opened The Brooks Restaurant & Bar, Gods Kitchen, Casa De Playa, Assaggini, and at The Royal Hotel with a special performance from Kylie Auldist, well-known Australian Soul Singer of The Bamboos and Cookin’ On 3 Burners fame. Swing and Blues fans will find just the right mix of foot stomping tunes at Double G Saloon from Friday to Sunday and at ‘The House of Blues’ event at Beaches Mornington on Sunday 11th June, an all-day event featuring back to back blues, swing and guaranteed good times. Now in its 5th year the festival continues to deliver with a unique and inclusive line up of performers across the genres of Jazz, Blues, Swing and Soul. There is something for everyone and as a festival dedicated to supporting live music, arts and culture on the peninsula we invite you to take a look at the program and join us for a long weekend of fun and entertainment on the Queen’s Birthday Long Weekend, 9-11 June. Tickets On-Sale Now. www.morningtonjazz.com.au

LENNON: THROUGH THE LOOKING GLASS Lennon: Through a Glass Onion is back in Australia following their sensational 16 week season in New York. The internationally acclaimed theatrical event celebrating the genius, music and phenomenon of John Lennon which we know and loved as LOOKING THROUGH A GLASS ONION was reproduced and rebranded for its Off-Broadway debut at the Union Square Theatre. Created and performed by renowned Australian actor/musician John Waters and esteemed singer/pianist Stewart D’Arrietta, Lennon: Through a Glass Onion, is partconcert, part-biography and features 31 iconic hits including Lennon solo works such as Imagine, Woman, Working Class Hero, and Jealous Guy and Lennon’s collaborations with Paul McCartney, including, Strawberry Fields Forever, Revolution, and, Lucy in the Sky with Diamonds. “It was truly an emotional experience seeing Lennon: Through a Glass Onion in New York at its American premiere” said producer Harley Medcalf. “We were overwhelmed, blessed really, to have the support of Yoko Ono and the Lennon Estate. As Charles Waterstreet (Fairfax) said, “We should get out the streamers and confetti to shower D’Arrietta and Waters in an open limousine to the steps of our town halls””. The show will return to the US following the Australian tour in April/May. John Waters added “To be embraced by New Yorkers as we were from October to January, this was a great reward for all of us who worked so hard to get our show there, at the Union Theatre. It truly felt as though Glass Onion had in fact given the city what it needed, to reconcile their own sense of loss of a much loved ‘son’, as John Lennon came to be. Night after night, our audiences stood to acknowledge us, and it doesn’t get much better than that.” In 1992, twelve years after Lennon’s death,

Waters and D’Arrietta first conceived and performed Lennon: Through a Glass Onion on a small stage at the Tilbury Hotel in Sydney. The show was an instant success. In the years that followed, Waters and D’Arrietta toured the show and played sold out engagements at venues including The Sydney Opera House. The show performed a three-month engagement in London’s West End. “Its been fantastic the response the show is receiving, especially from the younger audiences that are coming along, some of whom were not even born when Lennon and The Beatles were recording and releasing their music. It’s a testament to the legacy of the man and his music that still excites and intrigues people to this day” says Waters. “It never ceases to amaze us how many people still request to see the show, even after our last lengthy tour, we’re constantly getting emails and messages asking when is the show coming back, so its great that the demand and interest is always there”, says Waters. “The song Glass Onion was John Lennon’s postscript to The Beatles. It had such a strong image of crystal ball-gazing and peeling away the layers that it inspired the format for this show – a kaleidoscope collage of song, word, emotion and image”, agrees D’Arrietta with Waters. For the audience this is either an emotional trip down memory lane or a wonderful introduction to the life and times of one of the most fascinating icons of our time. LENNON THROUGH A GLASS ONION also appeared at the EDINBURGH FRINGE FESTIVAL in August 2016. www.johnwaters.com.au SUNDAY 11 JUNE – FRANKSTON – FRANKSTON ARTS CENTRE (VIC) www.thefac.com.au / (03) 9784 1060

PHOTOGRAPHY, ARCHITECTURE AND THE HUMAN FORM The exhibition Max & Olive focuses on the work of two photographers who shared their lives and studio for much of the 1930s and 1940s before going their separate ways. Max Dupain and Olive Cotton contributed enormously to 20th century Australian photography with Dupain ultimately being regarded as ‘Australia’s most respected and influential black and white photographer’ of this period. His famous 1937 work Sunbaker features in this exhibition. Looking at their work together between 1934 and 1945 provides an insight into the creative process of this unique partnership. Often shooting the same subjects, or pursuing subjects and pictorial effects in similar ways, the comparisons show Dupain’s more structured – even abstracted – approach to art and to the world, and Cotton’s immersive relationship to place, with an instinctual love of light and its effects. Iconic Australian Houses: an exhibition by Karen McCartney explores 31 of the most architecturally important Australian homes of the past 60 years. The exhibition begins in

the 1950s with the works of a new breed of Australian architects, and culminates in key works from some of Australia’s contemporary masters. This important exhibition looks beyond the physical structures to shine a light on the stories of the architects and clients. The houses featured are brought to life through vivid photography, rich illustrations, 3D models and filmed interviews with the architects who designed the homes and the people who commissioned and live in them. Melbourne-based artist Zoë Croggon works with sculpture, video, drawing and primarily, collage. Her practice considers the relationship between the kinetic body and its surroundings, contemplating the role we play in our environment and how deeply our surroundings inform our lives. MORNINGTON PENINSULA REGIONAL GALLERY, Civic Reserve, Dunns Road, Mornington. Exhibition dates: 12 May – 9 July. Hours: Tuesday–Sunday 10am–5pm. Exhibition admission fees: $4 adults / $2 concession. General information: 5950 1580. mprg.mornpen.vic.gov.au

WITH THE MUSIC AND LYRICS OF JOHN LENNON | LENNON & MCCARTNEY